London Underground layouts are rare – and even more so in 3mm:1ft scale. PHILLIP HUTCHINGS explains how this marvellous evocation of 1950s London came about. 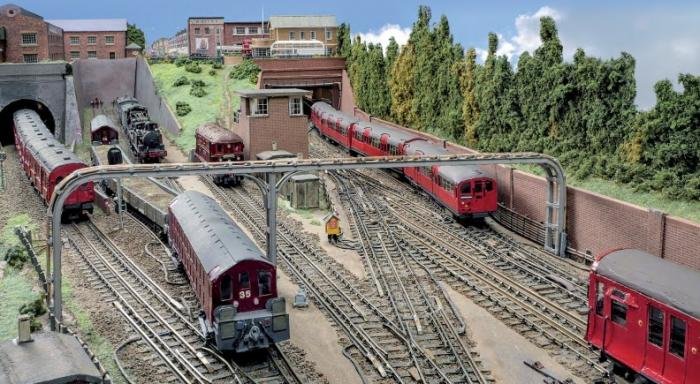 A train of ‘F’stock is held at the signal on the branch line while battery locomotives 35 and 38 reverse a spoil train into the permanent way yard. ‘F’0-6-2T L52 is on breakdown train duty while Metropolitan Bo-Bo No. 16 Oliver Goldsmith awaits its next turn of duty as a train of 1938 stock rattles in on the main line.
PHOTOGRAPHY, TREVOR JONES

THIS LAYOUT is the second of my 3mm:1ft scale exhibition layouts to carry this name. The first one depicted a small imaginary terminus in the Holland Park area of west London, very near to Kensington Olympia station and featured North London Line steam services and Southern electric workings from Richmond in the 1930s.