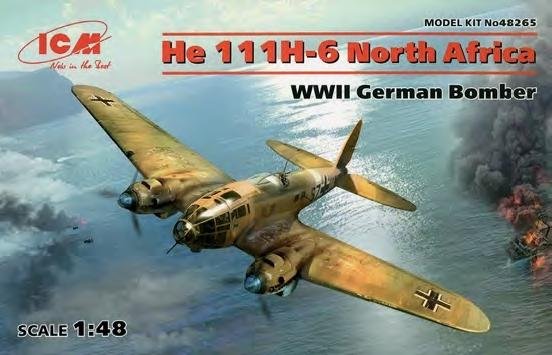 ICM’s delightful 1/48 He 111 is back! It’s a straightforward re-boxing of the H-6 (48262), with the 14 styrene runners accompanied by new decals. Three different configurations are provided for (and these match the three markings options), with internal and external bomb fits – the interior racking (marked as ‘unused’ on the instructions) is required for the former – plus a torpedo-carrying variant. ICM’s He 111s are the best on the market in the scale, with full cockpit and walkway detail, superbly rendered undercarriage units and well-defined engraved panel lines on the exterior. Two F5b aerial torpedoes (from the firm’s Ju 88 kits) are provided for the KG 26 option. There are three schemes: 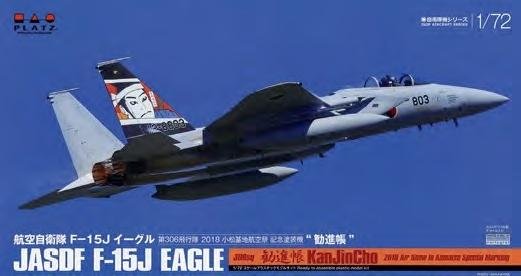 Here’s a welcome return for Platz’s splendid 1/72 F-15J, which has the same well-moulded styrene parts as previous releases of the baseline offering, presented on seven runners, but there’s a new decal sheet with artwork for a 2018 Komatsu Air Show airframe. This means there are full-length intakes and exhausts, a superbly appointed cockpit, detailed undercarriage bays and a full air-to-air missile load (four each of AAM-3 and AAM-4), plus three drop tanks. Options include open/closed canopy and airbrake, and raised/lowered intake ramps and ailerons. There’s even a magnetic 306th Tactical Fighter Squadron Komatsu Air Base badge as a bonus. A single scheme is supplied, for aircraft 12-8803/803, but there are also markings for the same F-15J with the unit number (306) on the forward fuselage (still with the tail artwork), as opposed to a repeat of the last three digits. 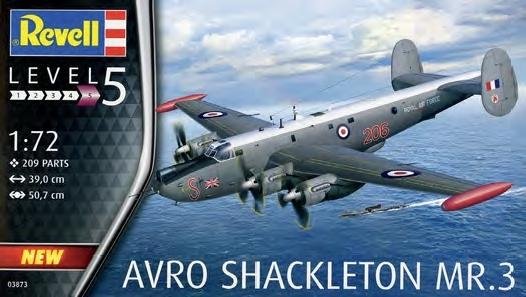 Modellers who noted inconsistencies in Revell’s Shackleton AEW.2 now have the reason – it enabled the firm to produce the later tricycleundercarriage MR.3. Eight styrene runners are retained from the original release and these are joined by three new frames, for the changed nose, extended bomb bay and doors, wingtip fuel tanks, nose landing gear and bay, auxiliary jet engines and cockpit glazing; together these allow for either a Phase 2 or Viper turbojetassisted Phase 3 variant. All parts are moulded crisply, with minimal flash, while engraved panel lines and rivets add up to a refined exterior, although the fuselage cross-section issue remains from the initial boxing. There are two decal schemes: 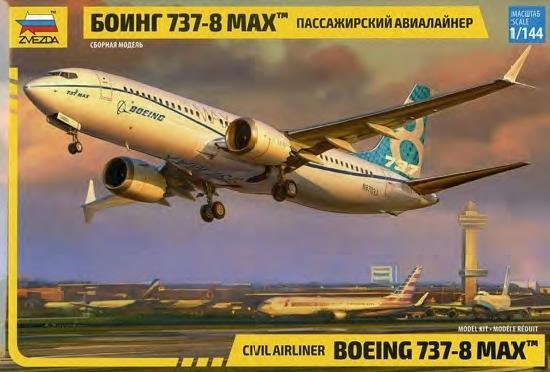 Zvezda was quick to follow its 737- 800 with the more modern 737-8 MAX. It comprises five styrene runners (as per previous releases) but Frame E is a replacement item, with all necessary parts to build this updated variant. These include split-tip winglets, larger underwing engines and a re-shaped tail cone. The undercarriage is unchanged, although purists may wish to extend the nose leg. All parts are moulded beautifully, notably the engine fan blades and exhaust ‘petals’, while the engraved panel lines are extremely fine. There is a single scheme for a Boeing machine, so once the basic overall white fuselage with grey/ metallic wings is painted, Zvezda’s excellent decals supply the rest, from the intricate fin design to the curved cheat line. Note the passenger windows and windscreen are supplied as ‘hollow’ items, so modellers may wish to paint the kit’s clear styrene glazing beforehand. 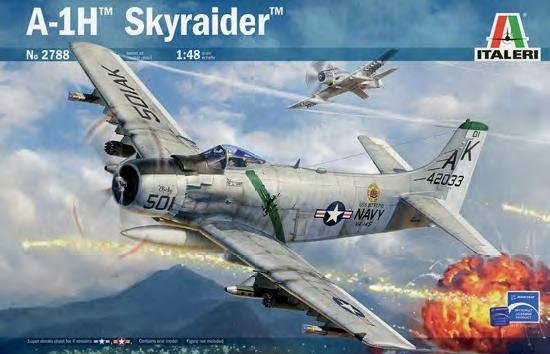 Esci’s A-1H is now 40 years old, and despite Italeri’s stunning (and very colourful) decals in this latest re-boxing, this shows in the raised panel lines and vague/notional detail. While the low parts count may appeal to some modellers, the fit isn’t good, and would require considerable work to raise it to modern standards. Compounding these issues, Tamiya’s 1/48 Skyraider is cheaper, yet far superior, making this kit hard to recommend. There are four schemes: 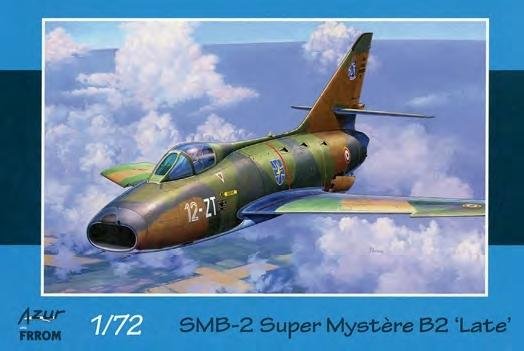 Released at the same time as the ‘Early’ boxing (see Oct 2019, Reviews p.80) FRROM’s Super Mystère B2 ‘Late’ provides for camouflaged airframes, but otherwise the parts are identical. The crisply moulded components are presented on seven styrene runners, with external detail represented by engraved panel lines; interior features include a full length intake trunking and exhaust pipe. There’s a well-appointed cockpit, with a choice of open/ closed canopy, while underwing stores include two sizes of fuel tanks. This is easily the best Super Mystère kit currently available, and a ‘must-have’ for fans of French aviation. The three liveries are: 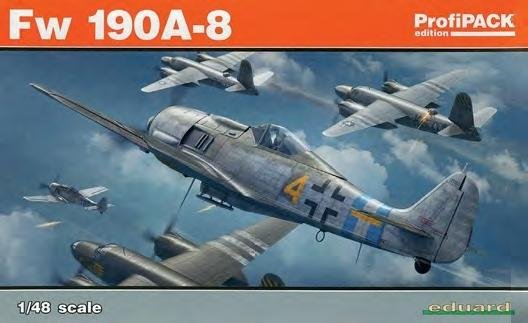 Believe it or not, it’s 13 years since Eduard’s Fw 190A-8 was first released as a ProfiPACK, and this latest iteration features updated parts, accompanied by a canopy/ wheel mask set and a pre-painted photo-etched metal fret. All components are moulded to the firm’s exacting standards, with the panel lines and rivets notable for their refinement, while the cockpit is a stunning miniature replica straight from the box. There are five Reich Defence options: 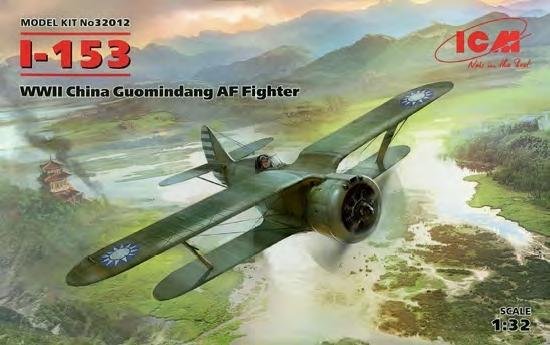 ICM’s I-153 ‘Chaika’ (Seagull) returns in Chinese Nationalist Air Force livery, with the four original styrene runners augmented by a fifth, which provides an open engine face, plus push-rods and barrels for the lower ShKAS weapons. There’s even a template to ensure the guns are located correctly. The firm has cornered the market for I-153s, with high-quality offerings in all three major scales. This 1/32 kit features convincing engine cooling fins, a complete framework for the cockpit and delicate surface fluting to represent fabric-covered sections, notably on the wings. Control surfaces are provided as separate items, which enables these to be deflected, and there’s a helpful rigging diagram for that final touch. Four decal options are included, all clad in olive-green upper surfaces and pale blue undersides. No unit data is supplied, but two airframes have white/blue striped rudders, and three bear serial numbers. 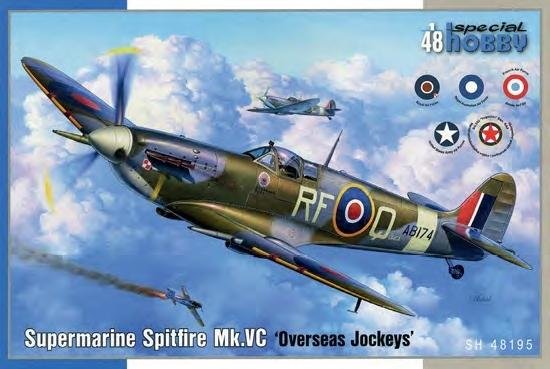 Many Commonwealth and Allied pilots flew Spitfires and Special Hobby’s latest such release is tailored specifically to those aviators. While the box top depicts a ‘standard’ airframe, options are included for Vokes and Aboukir filter-equipped machines, with parts supplied on eight styrene runners. It may not be the most modern offering, but there’s plenty to delight, from the interior detail to the delicate recessed panel lines. There are five schemes: 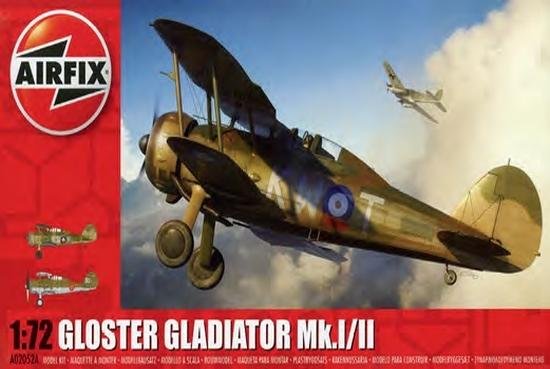 Airfix’s recently re-tooled Gladiator is an absolute gem, offering plenty for modellers of all skill levels; novices will enjoy the quick and easy assembly, while those with more experience have the perfect base to add extra detail and rigging as desired. This latest release comprises four styrene runners, which allow either a Mk.I or Mk.II variant to be built. All parts feature crisply moulded detail, with restrained scalloping to simulate fabric-covered surfaces, and there is a decent replica Bristol Mercury. Neat touches include inter-wing strut supports, which are removed once the glue has dried to ensure correct alignment. There are two decal options: 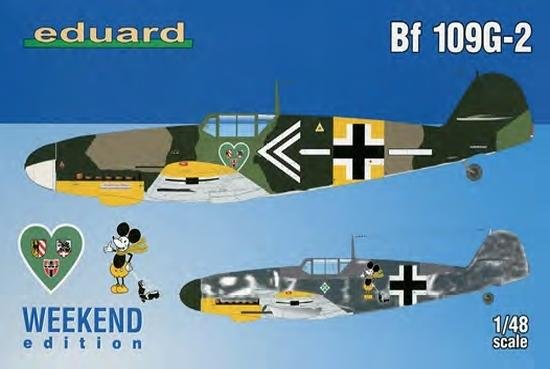 Eduard’s 1/48 Bf 109Gs represent great value for money, especially the Weekend range offerings, which have just styrene parts. Its G-2 is a case in point, with a beautifully detailed cockpit, raised/ lowered control surfaces, smooth/ treaded mainwheel tyres, open/ closed canopy and a selection of underwing/fuselage stores. There are five styrene runners; two are common to all of Eduard’s Bf 109s, while the remaining three supply the wings, fuselage and transparencies. Exterior surfaces have finely engraved panel lines and a representation of the airframe rivets, all of which appears convincing in this scale. The G-6/14s may attract all the attention, but this is an ideal opportunity to have an early G-2 variant. There are two options: 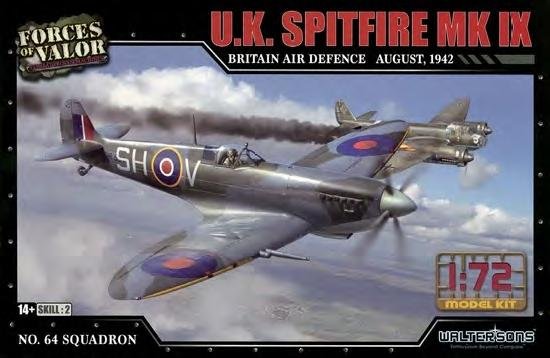 While aimed at wargamers, the Forces of Valor kit series is ideal for less experienced modellers as they are essentially snap-together offerings. There’s a splendid cockpit and even a detailed Merlin engine, which can be displayed as the cowling panels are removable. All parts are well moulded, and there’s an absence of flash, although one or two seams are quite prominent. Panel lines are arguably slightly heavy in places, but otherwise this looks spot-on for a Mk.IX, and there are options for underwing stores and raised/lowered undercarriage. This could easily be built in an afternoon and, the styrene is coloured – in this case it’s Dark Sea Grey, which isn’t strictly correct for a mid-war machine, which had Ocean Grey/ Dark Green uppersurfaces and Sky undersides. The single markings option is DR581/SH-V, 64 Sqn, Scotland, 1943