A 1/48 Spitfire Mk.XVIII from Airfix is now available… but the firm has also re-released its Mk.XII in the same scale. CHRIS CLIFFORD inspects both. 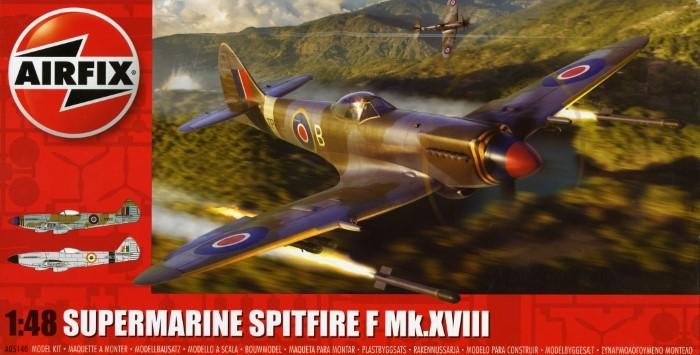 Having already produced a new-tool Spitfire Mk.XIV in 2019, it was almost inevitable that Airfix would extend this moulding to produce a Mk.XVIII, as these sub-types are so similar. The previously announced F Mk.XVIII (item A05140) is now on sale and it employs the parts from the Mk.XIV package, but covers for the fuselage camera ports are provided as this boxing is a pure fighter, rather than a recce-capable FR.XVIII.

Both standard and enlarged rudders are also provided (the latter having a split trim tab), and like the Mk.XIV it comes with an ‘e’ wing; 20mm cannon outboard, with .50 cal inboard. Airfix also supplies a new weapons runner, which carries 60lb rocket projectiles, plus two 250lb bombs and a single 500lb bomb, and the associated wing and centreline racks.