Airfix's long-awaited 1/72 Hawker Tempest Mk.V is finally on approach. In this exclusive preview, AMW provides a sneak peak at the kit’s contents. 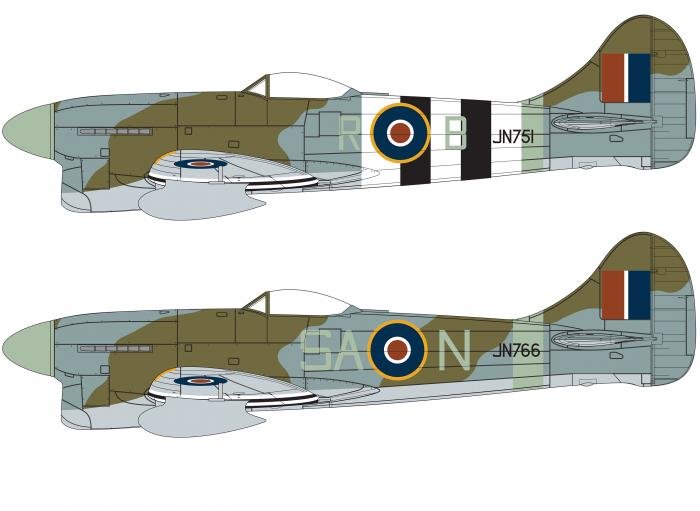 For those who enjoyed Airfix’s recent same-scale Spitfire Mk.Vc, the Tempest takes it a stage further, and it’s sure to be a popular sight on modelling displays. There are five styrene runners in total and the clear frame includes drop tanks with an integrally moulded pylon –a neat way of representing the type’s conspicuous transparent fairing. 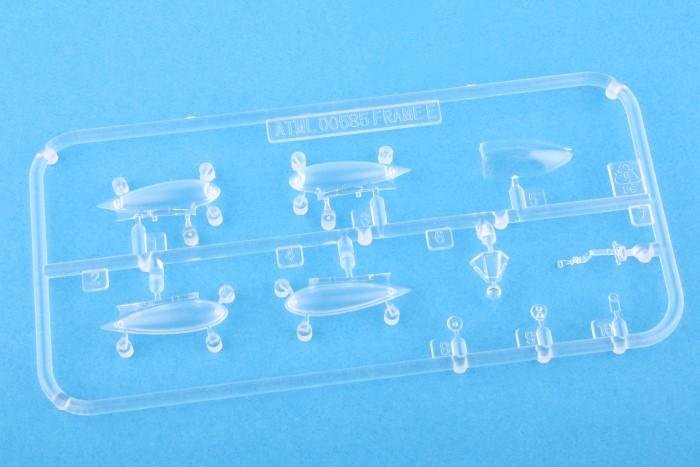 Above: Airfix’s clear runner provides a windscreen and canopy, plus two-piece drop tanks, allowing the type’s ‘see-through’ pylon fairings to be replicated faithfully.

While features on the larger items catch the eye immediately, notably the exterior panel lines (among the best Airfix has produced), it’s the smaller items that excel, such as the engraved airframe fasteners and extended footrest for a wheels-down configuration. That said, the one-piece undercarriage bay insert is arguably the standout component, as it doubles as a wing spar (for a solid central structure) and includes the inner lining for the oil cooler exhaust vent, so there’s no tricky seam to deal with. Similarly, clever design of the lower wing half means it includes a section of the fuselage, removing the risk of an awkward wing/fuselage join. 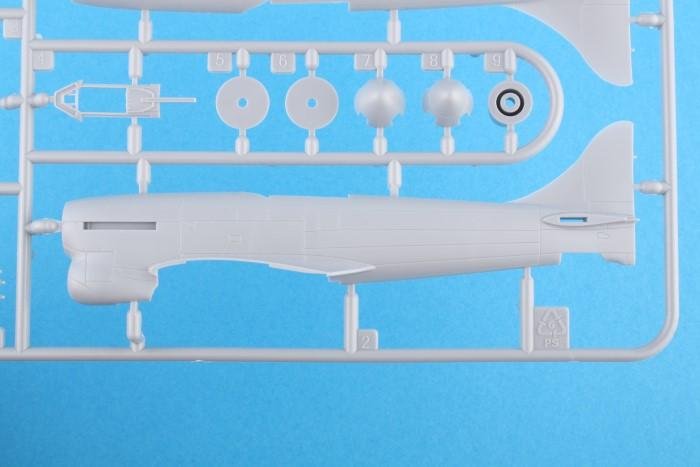 Above: Recent Airfix toolings have featured fine engraved detail on the exterior surfaces and its Tempest is no exception, including fasteners for the cowling panels.

This attention to detail extends to the interior: the cockpit floor (which is part of the upper wing half) is represented accurately as a ‘bottomless’ type, with suspended footrests and rails onto which the rudder pedal and control column are added. Fuselage sidewalls feature convincing moulded detail – notably the internal framework – and there’s even a separate reflector gunsight. The usual Airfix options aren’t omitted either, with a choice of open/closed canopy, raised/lowered undercarriage and provision for mounting the model on a stand (available separately). 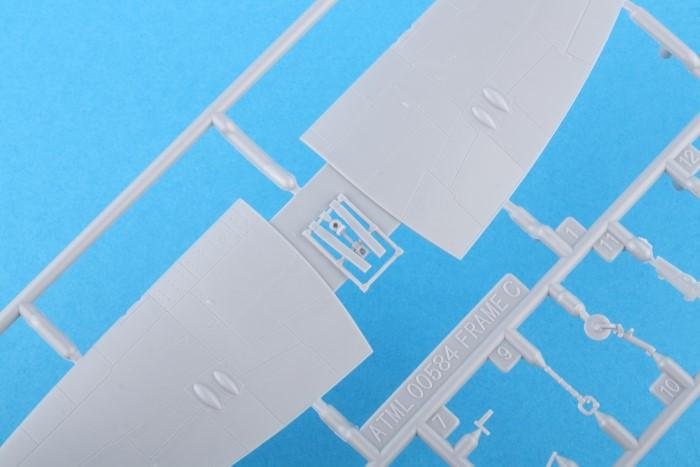 Above: Wing alignment issues will be a thing of the past thanks to the one-piece upper/ lower halves – the former includes an accurate ‘bottomless’ cockpit floor. 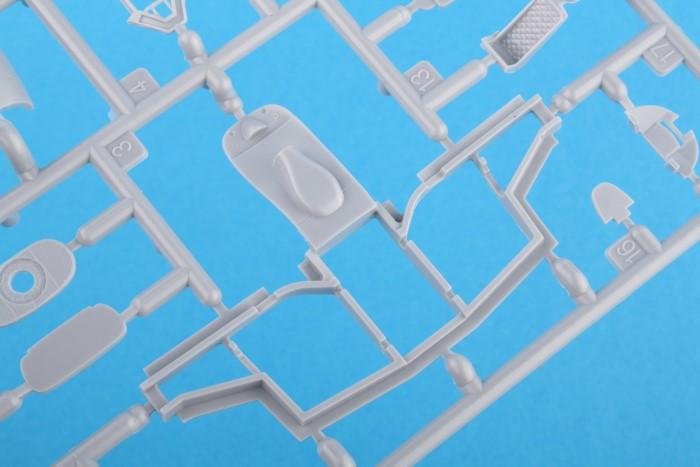 Above: Arguably the kit’s key component: a one-piece undercarriage bay insert that doubles as a wing spar and provides a seamless link to the chin oil cooler intake.

Two styles of spinner are supplied, apparently to represent early- or late-production airframes, and there are two types of mainwheel: a five-spoke version used in this release and a four-spoke version, which would appear appropriate for a later airframe. Note, just Series 1-style cannon fairings are included, but it should be a fairly easy task to scratch-build the Series 2 short-barrel arrangement. 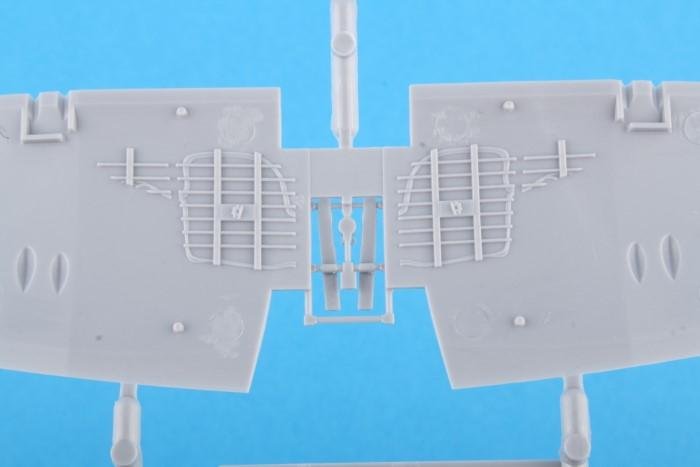 Above: The obverse side features integrally moulded undercarriage bay detail, with finely rendered framework and cabling, while separate cannon inserts (top left and right) will allow for different variants. 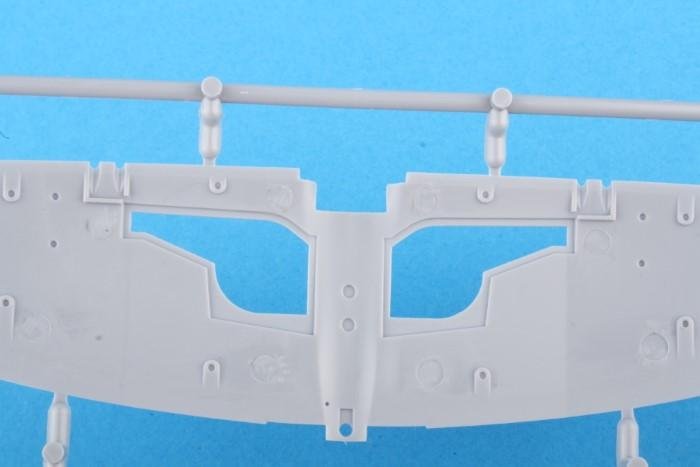 Above: Inner faces on the lower wing half show the outlines for the undercarriage bay insert and cannon parts, with recessed openings for the wing pylons.

Markings are included for two late-war airframes, including one clad in D-Day identification stripes: