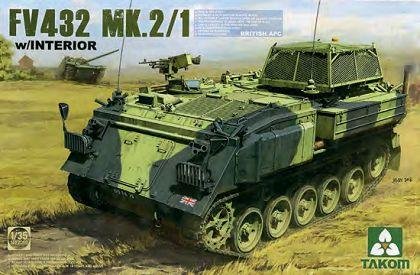 GKN SANKEY’S FV 432 armoured personnel carrier (APC) has now been in service, in one form or another, with the British Army for more than 50 years.

This longevity makes it even more puzzling why it’s taken so long for a 1/35 styrene kit to be produced, but thankfully, Takom’s offering (2066) is a joy to behold. Unsurprisingly, all parts are splendid, with crisp features and exhibiting stunning detail, notably the fully equipped interior with its busy driver’s position. The tracks are link-and-length items, and there’s a neat jig to ease assembly (as well as for attaching the torsion bars).

In providing this wonderful detail, Takom appears to have packed in features from throughout the type’s service, which might lead to confusion. These include Clansman and Bowman radios (the latter weren’t fitted until the early 2000s), while other parts are applicable to the diesel-powered Mk.3, so checking references is a must. Most strikingly, the distinctive upper hull stowage bin wasn’t added until at least 1989.

Don’t be fooled by the apparent lack of colour annotations in the instructions, the rear cover is a gatefold and provides digital images that explain all. The four schemes depict the most common camouflage variations, including British Army green/ black, overall Desert Sand and the Berlin Brigade’s geometric white/brown/blue-grey.

Considering this kit features a fully detailed interior, the £37.99 price tag represents great value, and the basic parts offer scope for plenty of other versions: www.pocketbond.co.uk