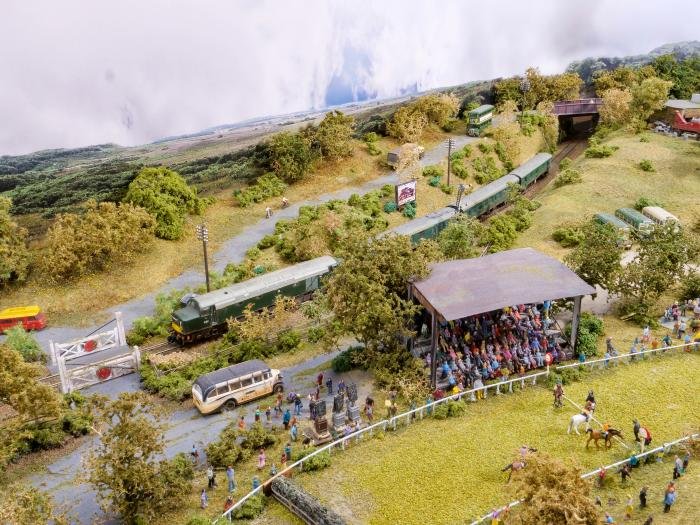 Ambleton Vale is an 'N' gauge model railway set in the rolling countryside somewhere in central England around 1965. It is a fictitious terminus station at the end of a branch line connecting the village of Ambleton Vale with the county town some 20 miles away. The line has survived in the face of the general decline in rail travel because of a flourishing livestock market on the outskirts of the village and the nearby Ambleton Vale Racecourse.

The line was set up to facilitate the transportation of animals both at the main station, which is close to the market, and at a short siding which services the racecourse, but of course it carries plenty of humans too.

The station is busiest at weekends when the market is in progress, but is also used during the week by commuters who find that rail travel makes it possible for them to have a quiet rural lifestyle away from their work in the city.

The total size of this 'N' gauge layout, which features DCC sound equipped locomotives, is 16ft x 18ft and it was designed to be very accessible and of interest to the whole family at an exhibition. With its large live stock market and its horse racing track you will find lots of interest around the scene as well as in the trains themselves.