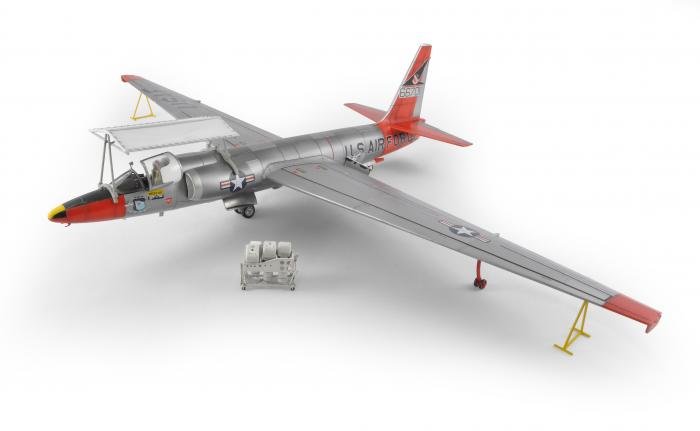 AFV Club Lockheed U-2A
Following “a disaster” with the hi-vis orange areas, which had to be stripped and resprayed, Alan Shingler achieved stunning results with AFV Club’s 1/48 Lockheed U-2A, representing an aircraft based at the Air Force Flight Test Centre at Edwards AFB in 1960. Eduard cockpit and seat harness detailing was added, while New Ware masks were also used. The finished model was displayed with the aircraft’s reconnaissance cameras mounted on a separate trolley.

Airfix BAC TSR.2
Arguably one of the best combat aircraft that never entered service, the cancelled BAC TSR.2 has long been popular with aviation enthusiasts and modellers with Airfix’s 1/48 depiction. Just XR219 was ever flown, with Ian Surridge replicating one of the test flights with an out-of-the-box build and a Coastal Kits display backdrop, aptly named Storm Clouds Ahead. 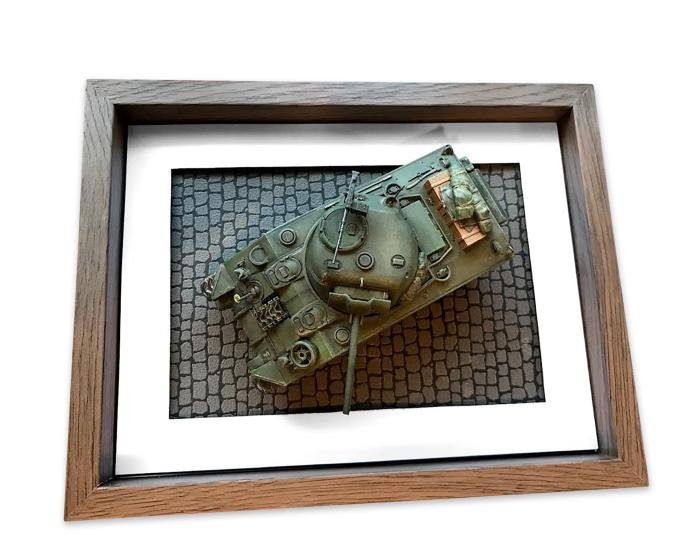 Tamiya M4 Sherman
Modelling projects with a personal connection can be the most rewarding, which was the case for Adam Danks as he replicated the Sherman tank described by a Normandy veteran now living nearby in Western Australia. His experiences involved landing on Sword Beach with the East Riding Yeomanry on June 6, 1944, escaping a vehicle whose smoke rounds were hit by enemy fire, plus taking part at the Battle of Arnhem. The 1/48 model, adorned with custom markings and Black Dog aftermarket additions, was presented as a gift by Adam at the end of the project. 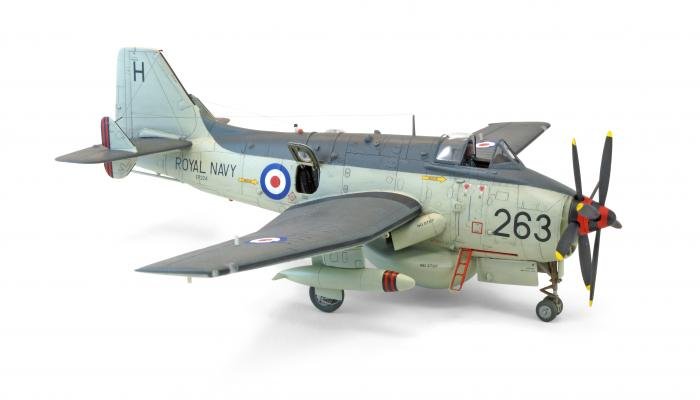 Sword Fairey Gannet AEW.3
Bernd Korte used Sword’s vac-formed canopy and RES/KIT wheels to embellish the former company’s 1/72 Fairey Gannet AEW.3, plus a boarding ladder was scratch-built from wire and spare styrene. Kit-supplied markings were used to replicate XL471 as operated by 849 Naval Air Squadron from HMS Ark Royal in 1978 – the unit would disband in December of that year. 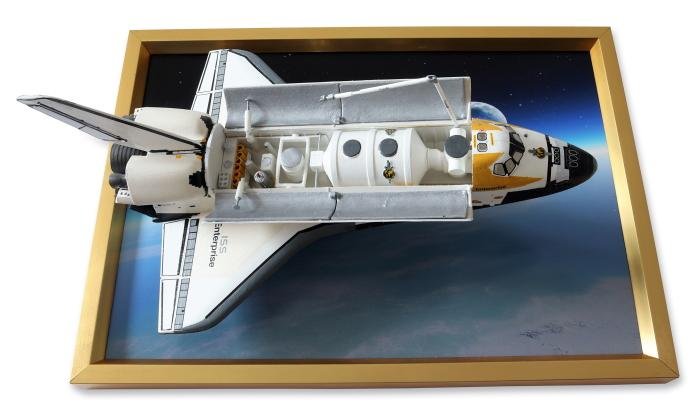 Revell Space Shuttle
Although it may appear to be a real-space model, Richard Butler’s take on Revell’s 1/144 Enterprise orbiter incorporates a sci-fi element, as its markings and ‘ISS’ prefix are those of the Terran Empire that rules in Star Trek’s Mirror Universe. As opposed to scientific equipment, the cargo bay is loaded with bio-weaponry, missile launchers and a particle cannon...

Airfix Royal Aircraft Factory RE8
After returning to the hobby following a long break, Nick Callan aimed to elevate older offerings to more modern standards at minimal cost, relying instead on scratch-building techniques. His exemplary work was put to great use on Airfix’s 1957-vintage 1/72 RE8. The cockpit, gunsight and engine received custom-made embellishment, while aftermarket Scarff ring and Lewis guns, Uschi van der Rosten rigging and modern decals were also added. 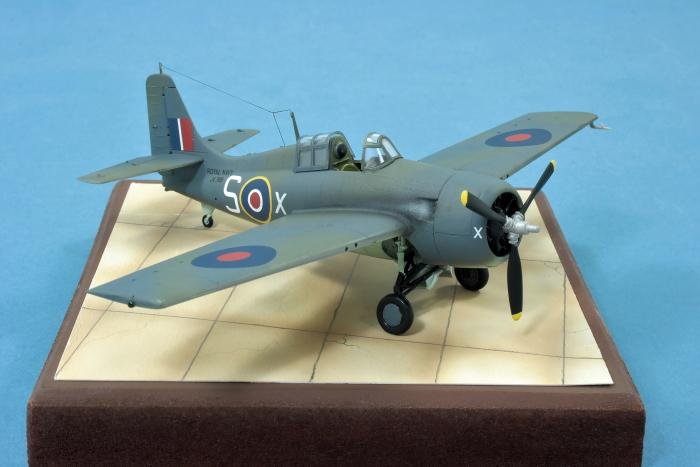 Arma Hobby Grumman Wildcat Mk.IV
AMW contributor Mike Williams built Arma Hobby’s newly tooled 1/72 FM-2 Wildcat in AMW122, and his son, Ethan Williams, has followed in his footsteps with the firm’s RAF boxing, where the type was known as the Wildcat Mk.IV. The airframe depicted was flown by Lt Ronald F Moore during Operation Prefix in March 1945, being operated by 882 Naval Air Squadron aboard HMS Searcher.# 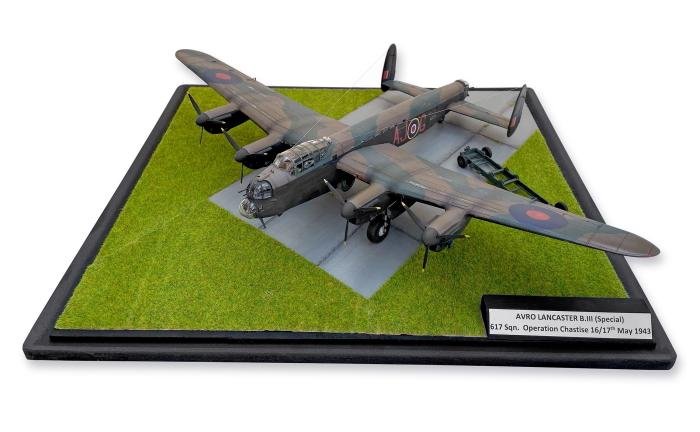 Airfix Avro Lancaster B.III
Lancasters modified for the dam-busting Operation Chastise raid are always popular subjects, as proven by this example of Airfix’s 1/72 kit built by Richard Barber. Markings for ED932/AJ-G – ‘G for George’ as flown by Wing Commander Guy Gibson – were supplied in the kit, while the only aftermarket addition was Eduard canopy masks. 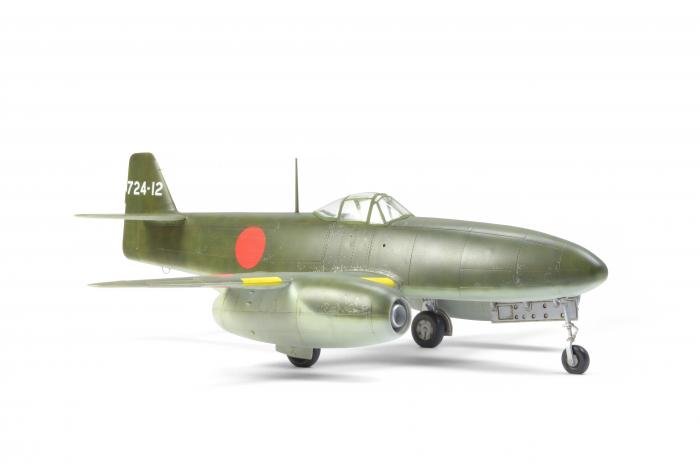 FineMolds Nakajima Kikka
Despite being inspired by and bearing a pronounced similarity to the Messerschmitt Me 262, the Nakajima Kikka was developed independently in Japan, and is replicated superbly by Matthew Owen’s build of FineMold’s 1/48 offering. Just additional riveting was added to an otherwise out-of-the-box build, with the finish supplied by Tamiya XF-12 JN Grey and XF-13 JA Green, plus minimal paint chipping and staining to replicate the real aircraft’s limited use. 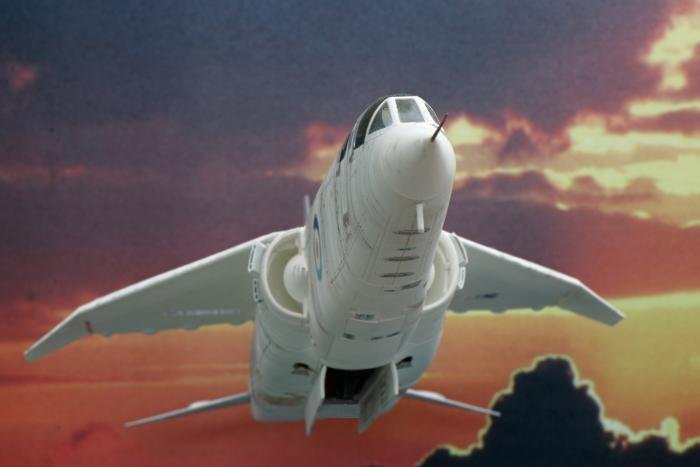 Airfix BAC TSR.2
Another of Ian Surridge’s depictions of the BAC TSR.2 test airframe XR219 involved a head-on approach and a Sunset display scene from Coastal Kits – again, the kit was build out of the box. 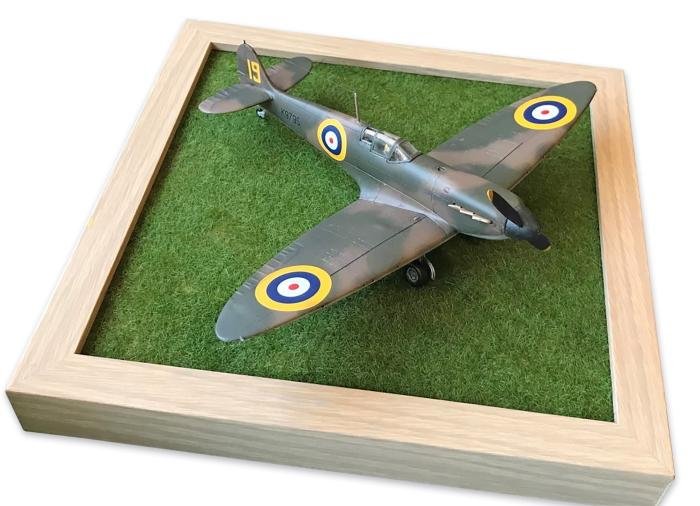 Airfix Supermarine Spitfire
Following practice on Airfix’s 1/72 Spitfire and 1/48 Hurricane, Adam Danks turned his attention to the firm’s 2007-vintage 1/48 Spitfire Mk.I – this kit was released in just three versions before being replaced in 2014. Pre-war markings were considered to provide an unusual appearance, and just minimal wear was replicated to simulate a fresh, early airframe. 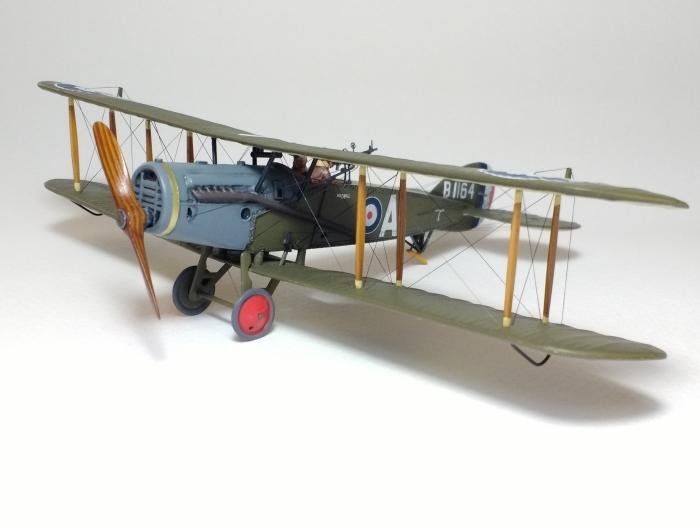 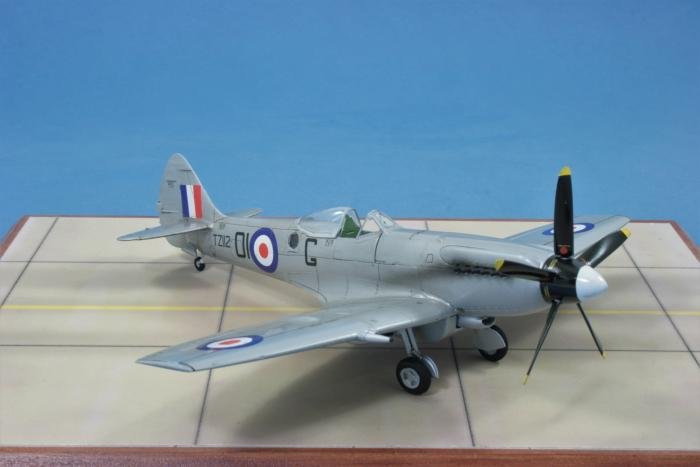 Airfix Supermarine Spitfire FR Mk.XIV
Ethan Williams tackled the combat version of Airfix’s 1/48 Spitfire Mk.XIV, depicting a Fighter-Reconnaissance aircraft, TZ112/OI-G, of II(AC) Squadron at RAF Bückeburg, Germany, in 1950. The canopy was posed open to display the wealth of internal detail, while the otherwise well-kept finish was enlivened with a convincing exhaust stain. 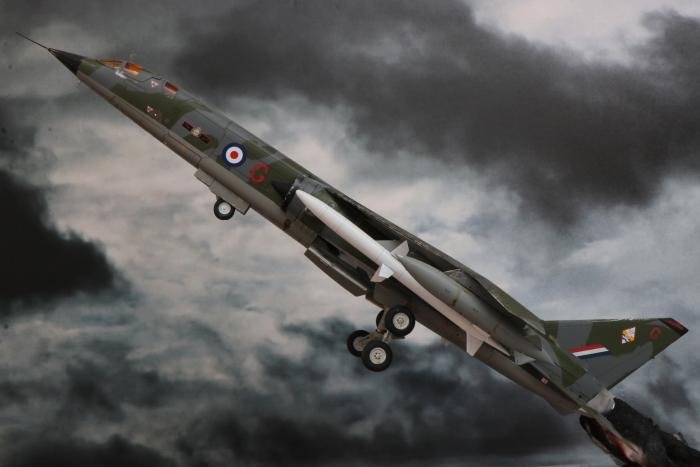 Airfix BAC TSR.2
With the type frequently spoken of in ‘what-if’ terms, it’s no surprise modellers have also taken this route – Ian Surridge’s final TSR.2 project utilised Model Alliance decals to suggest the appearance of a 617 Squadron jet. A pair of Mastercaster Blue Water missiles and spare fuel tanks were also added to the model. 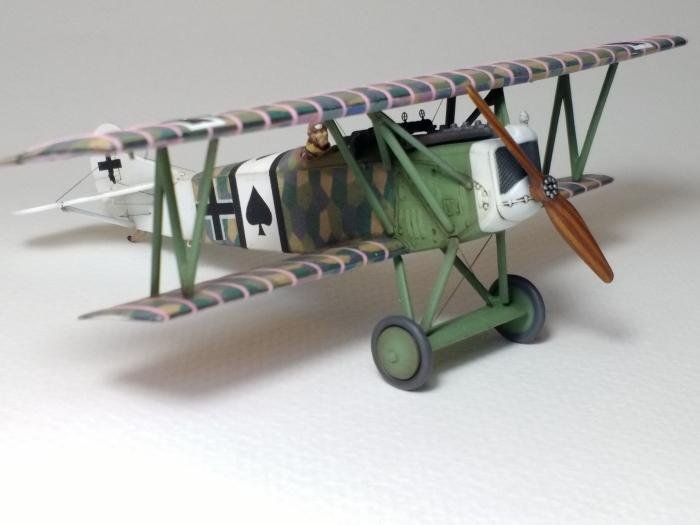 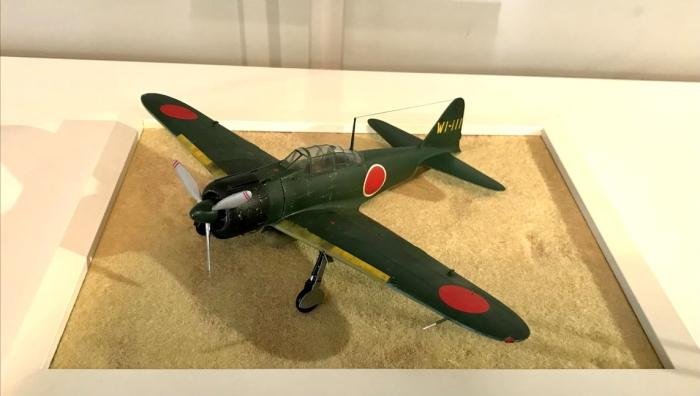 Hasegawa Mitsubishi A6M2B Zero
Moving to the Pacific theatre, Adam Danks situated Hasegawa’s quarter-scale Zero on a suitable base and set about reproducing a combat-weary airframe with paint chipping and wear – notably on leading edges. Staining was added around exhaust outlets while further distress was simulated around the cockpit. 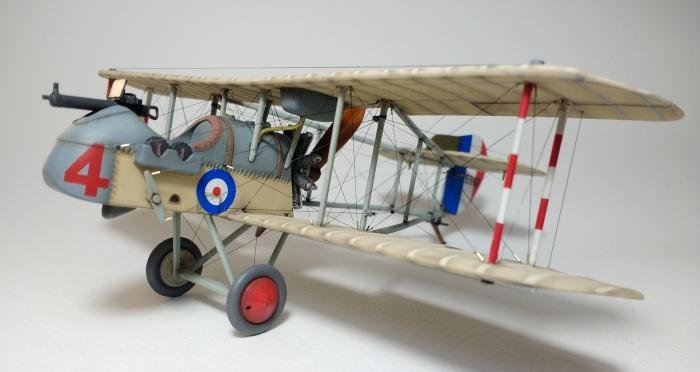 Směr de Havilland DH.2
Although stated to be 1/48, Směr’s DH.2 is a re-boxing of the venerable Merit kit, which originated in the 1950s and was based on 1/50 measurements. Even so, the increase in scale meant Nick Callan could use brass pipe to detail the radiator pipework, Lewis gun and compass housing, while the rigging was added via 0.08 monofilament coloured via Sharpie – Ushi van der Rosten line was retained for control cables.