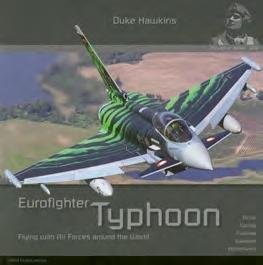 The Duke Hawkins reference series has rapidly established itself as one of the ‘go-to’ reference titles for modellers, with its stunning photographic examinations of modern fast jets. It’s sixth volume, which focuses on the Eurofighter Typhoon, is no different, save for the fact the shots seems to be even better than ever. Whether the aircraft are portrayed in the air, on take-off/ landing, or with maintenance hatches open to reveal the inner workings, all the images are pin-sharp and bursting with detail. Regular ‘line’ jets receive most attention, but there are also several pages devoted to special liveries, whether that’s for the famous NATO Tiger Meet, or an anniversary, such as that of the colourful Luftwaffe airframe painted to commemorate 100 years since the death of World War One ace Manfred von Richthofen. All the above is highly useful for modellers, but it’s the close-up sections that provide the most information, with every nook and cranny examined in depth. Subtle elements such as the drooped inlet ramps on parked aircraft, the changes between the various production blocks, and the different weapons carried by various nations are all covered, making this an indispensable reference on the multi-role Typhoon. SF 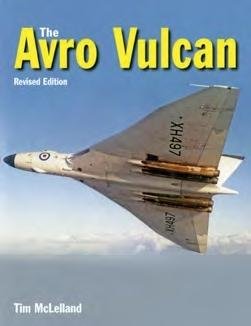 Few aircraft can evoke as much excitement and interest as the Avro Vulcan, and this updated and revised history provides an enthralling insight into the V-bomber’s development and operational service. The type’s initial concepts, and the use of ‘baby Vulcan’ testbeds to validate the planform and engine arrangements are arguably as fascinating as the eventual design, and all are addressed in this exhaustively researched book. A chapter is devoted to the Vulcan’s nuclear role, including the abortive Skybolt missile and proposed Phase 6 design, which would have carried six of these weapons… there’s even a study on using the bomber as a launch platform for nuclear bomb-loaded Gnat fighters! No history of the Vulcan would be complete without mentioning its role in the Falklands War, and this receives close attention, from analysis of the missions to the later use as an air-refuelling platform. While the narrative is engrossing, it’s enlivened throughout by crew anecdotes, and these include explanations of how bombs were aimed. This is the definitive history of the classic Vulcan, and one no fan of Cold War British bombers should be without. SF 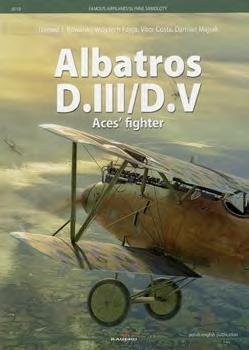 Part reference, part modelling step-by-step, this splendid Famous Airframes volume is dedicated to the Albatross D.III and D.V biplane fighters of World War One. The Polish and English text is well written, notably for the history of the types’ development and operational service, where engineers realised the adage of “if it looks good, it must be good” applied to both designs, and this was proven in combat. The first section is devoted to how these formidable biplanes came to be, backed by period photos of the aircraft – and thankfully the temptation to include restored/replica airframes has been resisted. A set of design drawings brings this part of the book to a close, before attention shifts to three high-quality stepby- step builds; one features Eduard’s 1/48 D.III, while the other two are of Wingnut Wings’ 1/32 D.Va. The associated photos are superb, with good lighting and depth of field, even on the close-ups, enabling modellers to understand all aspects of how these models were built, detailed and painted. The final 11 pages (plus the rear cover) provide a series of full-colour profiles, including several examples of Polish machines. SF 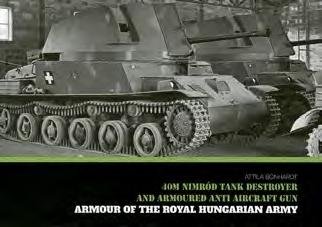 While there has been much written about other European tanks, there is little on the Hungarian 40M Nimród, so Attila Bonhardt’s informative volume fills a notable gap. The type’s genesis and development are covered in depth, while highlighting the dual-role nature of the design, which would see the vehicle employed as a tank hunter and anti-aircraft asset. Lists of the vehicle’s technical features then lead directly into the main photographic section, and it’s this element that modellers will find the most useful. All are dated either to the period immediately prior to World War Two or once hostilities had started and provide a wealth of information on this commonly used machine within the Hungarian Army. The Nimród is depicted on parade, in combat, on exercise and in maintenance, which allows views of most aspects, although there are few of the interior or fighting compartment. Comprehensive captions supply valuable context, and highlight nuances in camouflage, markings and equipment fits, with many of these offering plenty of inspiration for diorama builders, whether that’s using Hobby Boss’ 1/35 or IBG Models’ 1/72 kits. SF 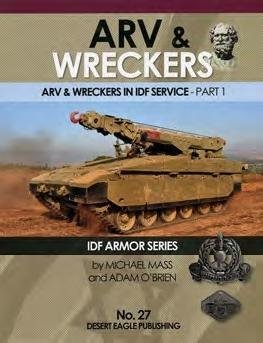 Desert Eagle’s meticulous approach to Israeli tanks and armoured fighting vehicles (AFV) has been extended to combat recovery machines. This subject area, and the Israeli aspect in particular, has previously received little attention from publishers or model manufacturers (there’s just a single kit from Hobby Boss, plus a series of aftermarket conversions), so this compensates for a major shortfall. The reader is first introduced to the Sherman ‘Gordon’ Type C, before tracing the various sub-types operated by the Israeli Defence Forces through the M578, M88A1 Tachlatz (Recovery Tank), Merkava ARV GP, Rekem Aqhzaka (maintenance AFV) and Namer Aqhzaka (Leopard APC for maintenance) vehicles. Each receives a similar treatment, with overview photos of the machine in barracks or on exercise/operations, which showcases its abilities and how hull-stored equipment is configured, before a series of close-up shots cover the subject in detail. Extensive captions provide further information and valuable context, while line drawings supply size details. Regardless of whether modellers are working on a kit, conversion or major scratch-building project, this is arguably the best possible reference for Israeli armoured recovery vehicles, and one that no fan of these types should be without. SF

ICONS OF THE ‘SILVER PERIOD’ 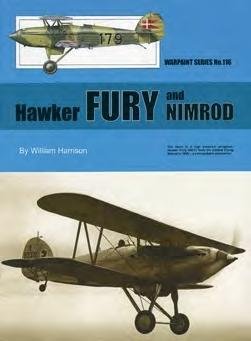 Hawker Engineering’s classic Fury and Nimrod biplane fighters are the focus of Guideline’s 116th Warpaint Series, providing the usual mix of modelling inspiration and historical information on these inter-war types. The text is free-flowing, rather than in separate chapters but despite this the narrative is well structured, and covers development, operational service (including the Fury’s involvement in the Spanish Civil War), camouflage and markings. The dedicated modelling section is comparatively short, with a spread of close-up photos that shows the cockpit, engine and undercarriage, plus a kit/accessory/decal listing. The latter highlights how poorly the Fury and Nimrod have been served by model manufacturers. While there are several colour photos of restored/replica airframes, most of the livery presentations are in the form of Richard J Caruana’s excellent profiles, which depict British (RAF and RN), Spanish (Nationalist and Republican), Danish, Japanese, Yugoslavian, Norwegian and Persian airframes. There are four pages of 1/48 scale plans of both types – differences such as the slightly swept outer wing sections on Danish aircraft and variations in the exhaust configuration are all included. This may be a slim volume, but it’s an ideal reference and introduction to the Hawker Fury/Nimrod family. SF 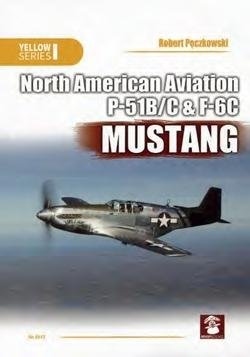 When the Mustang was first tested by the Royal Air Force, few could have known just how successful the eventual design would be, as the original Allisonpowered variant was lacking in performance. The substitution of a Rolls-Royce Merlin engine would transform the airframe into a world-beater, and one that was still flying operationally more than two decades later. Robert Pęczkowski’s well-written history and modeller’s guide is focused on the story of those initial P-51B and ’C airframes, supplemented by 14 pages of colour profiles by Artur Juszczak. It follows the same format as other entries in MMP’s Yellow Series, charting the fighter’s development, post-production modifications and technical characteristics, before examining the F-6C reconnaissance version. Detail photos occupy almost half of the pages, and these are a pleasing mix of wartime and warbird display aircraft images, with the latter used mainly for the close-up shots. These are augmented by selected extracts from Mustang pilot and engineering/maintenance manuals, providing further context to the photos and ‘raising the covers’ on the P-51’s structure and interior configuration. This is a treasure trove of information for modellers, regardless of which kit is being built, and one well worth considering. SF

HOME OF THE SCHOOL 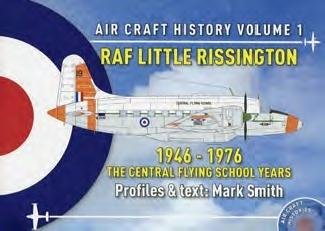 Coastal Craft’s first Aircraft History volume describes the lineage and aircraft of RAF Little Rissington from 1946 to 1976, a three-decade period when it was the home of the RAF’s Central Flying School, which trained the service’s military flying instructors. Mark Smith’s narrative is clear and concise, and serves as both introduction to the airfield and its environs and a neat segue to the main section, covering the various aircraft operated at this RAF station. These types receive similar treatment (although there is more artwork for the longerserving subjects), with colour profiles, notes on camouflage and markings, plus a basic description of its role, weapons fit (if any) and comments on modifications for the instructional purposes. While this is aimed at a modelling audience, the Aircraft History series is also ideal for any enthusiasts or history buffs, such is the level of research incorporated within the 48 pages. It catalogues the changes in colour schemes worn by RAF training aircraft, from High Speed Silver, to the addition of fluorescent orange stripes, transition to Light Aircraft Grey/White, and lastly the adoption of red areas on the fuselage and outer wings. It’s also bursting with inspiration for all those unbuilt Chipmunk, Jet Provost, Gnat, Varsity and Vampire kits , and comes highly recommended. SF