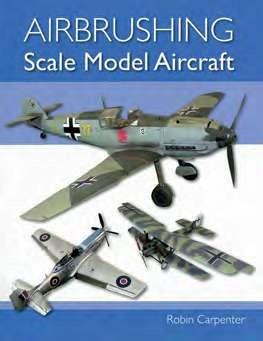 This engaging and easy to follow ‘how-to’ guide on airbrushing builds on the author’s tutorials, and provides a solid grounding on this painting technique. While aimed at the novice, it can be argued this is equally applicable for more experienced modellers, as it covers a multitude of techniques, and not just how to use an airbrush. A comprehensive approach is applied, starting with a discussion of how painting is done on real aircraft before delving into how a model’s surface is prepared…probably the most crucial stage. Basic tools and equipment are then described, along with an excellent section whereby each type of airbrush is examined and then taken apart, identifying the components along the way. Only at this point is paint employed, but as a primer, showing how contamination or poor mixing can affect the overall finish. Most of the pages are then devoted to the skill of airbrushing, covering all types of paint, plus masking, pre-shading, preparation of photo-etched metal and resin surfaces, creating camouflage schemes via masks, templates and freehand application, by carrying these out on several build subjects. This is a superb reference, and one that should be on most, if not all modeller’s bookshelves. SF 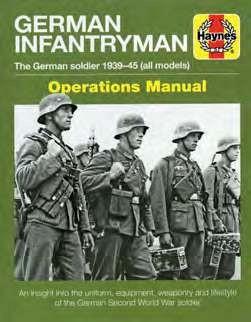 In a departure from previous Operations Manuals, Haynes focuses on the ‘whom’ — the German Infantryman — instead of the ‘what’. Rather than start with a soldier and his training, the author begins by analysing Germany’s education system during the 1930s, which focused on fostering loyalty to the Nazi regime. As explained here, it was at school and within the Hitler Youth movement that military training started — joining the Wehrmacht was merely a progression. The reader is then shown how a soldier was developed, equipped, rewarded and clothed. The second half is devoted to equipment specifics, starting with personal weapons, and progressing to mortars, artillery and motorised vehicles. The final chapters address German Army medical services and how casualties were processed, plus combat tactics. Key to the latter was the squad, usually a four-man team with an MG 34/42 machine gun at its core, usually led by a noncommissioned officer. The author then describes how everything was built from this formation. This is a fascinating account of the German Infantryman, and is backed throughout by a combination of period and re-enactment photos and is recommended for military modellers or figure painters. SF

By: Richard A Franks

Rather than just re-issue its Do 335 Pfeil monograph, Valiant Wings has updated and expanded the volume, providing even more information on this late-war fighter. The format is unchanged, with two major sections devoted to the airframe and its representation as a scale model (which also includes an in-depth walk-round), plus appendices that offer listings of the available kits, accessories, decals and mask products. Dornier’s ‘push-me/pullyou’ design is examined in depth, charting its development and ultimate deployment on combat operations, before adopting a ‘what-if’ approach and charting those aborted projects and ‘paper’ variants, including hybrid and swept-wing versions. A brief treatise on colours and markings (including colour profiles) leads into the modellers section, which opens with a series of kit reviews. The build chapter then covers 1/72 Dragon/Revell, 1/48 Tamiya, and 1/32 Zoukei-Mura and Hong Kong Models offerings. Isometric drawings are used to depict each variant, along with the changes between each (including several Zwilling designs), before the walkround component, which features a mix of period and museum photos and provides sufficient information for even the most ardent super-detailer. As a final bonus, there is also a gatefold, with 1/48 scale drawings. SF 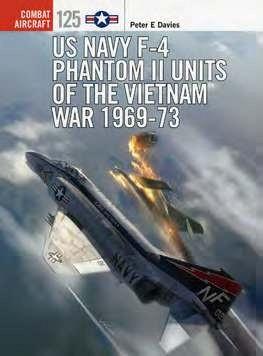 Much has been written on the Vietnam air war, but Osprey’s latest Combat Aircraft volume focusses on the US Navy’s carrier-based operations after the cessation of Operation Rolling Thunder in 1968. The opening section addresses the strategic/tactical situations at the time, strengths and weaknesses of the F-4 and its weapons systems and US Navy air combat training, before plunging the reader into the air war of early 1969. As a historical guide, this is a splendid compilation, but what sets it apart are the crew accounts, covering experiences during ground-attack and combat air patrols, which enliven the narrative enormously. These are interlaced with descriptions of the dangers of carrier-based operations, from rampstrikes to deck fires, highlighting the skills needed to operate an aircraft from these ships. There are ten pages of colour profiles, depicting F-4B/J variants, with the markings of most carrier deployed Phantom squadrons from that period.

Equally useful for modellers are the representative weapons loads, which generally portray a mix of air-to-air and air-to-ground munitions, most of which feature in the accompanying photos. SF