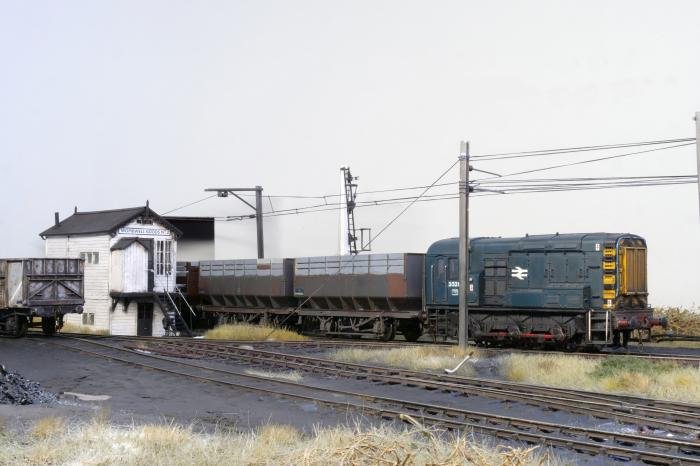 In 2017, Model Railway Journal launched their Cameo Layout Competition, promoting the building of compact, well presented layouts which both looked good and ran well. After a number of years not having built a layout myself, the competition provided the incentive I needed to get started, and Bottom Works Sidings is the end result. Whether I have achieved any of the things the competition set out to promote I will let you decide!

The layout is set in the heart of the South Yorkshire coalfield, just south of Barnsley, on a cold January morning in 1973, and recreates a small set of exchange sidings that function as a secondary entrance into a steelworks. It is assumed that these sidings were included within the scope of the Manchester, Sheffield and Wath electrification scheme of the early 1950s. As such, trains on the layout are hauled by a mixture of BR diesel and electric traction, as well as British Steel industrials, and consist of a mixture of coal, coke and metals wagons. While these are a variety of shapes and sizes, they are universally filthy!

The layout has been constructed using generally conventional techniques, drawing on the writings of Gordon Gravett and Ian Rice amongst others. Stock is either detailed ready-to-run or kit built, and all is weathered. More details of the layout and its construction are coming up in HM184.