Even though it is one of the wildest and most scenic rides in the country, the Cambrian Coast Line is not as well-known as it should be. EVAN GREEN-HUGHES delves into the history of this fascinating route, which is still open today.

Churchward ‘43XX’2-6-0 5393 leaves Barmouth Bridge and approaches the town with a down train on May 14 1951. John Wilson/Rail Archive Stephenson. 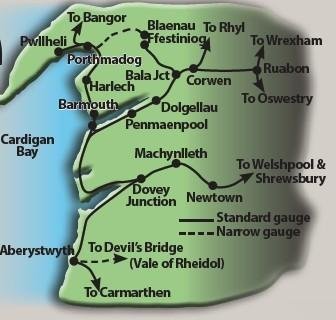 GWR ‘Dukedog’4-4-0 9003 calls at Penrhyndeudraeth with a Barmouth to Pwllheli train in the early 1950s. The ‘Dukedog’4-4-0s were built in the 1930s as replacements for worn out ‘Bulldog’4-4-0s by combining ‘Bulldog’and ‘Duke’parts. Gordon Hepburn/Rail Archive Stephenson.

THE RAILWAY line forming what is now known as the Cambrian Coast Line (CCL) runs from Dovey Junction, near Machynlleth (on the line between Shrewsbury and Aberystwyth), to the seaside town of Pwllheli, a distance of about 60 miles.