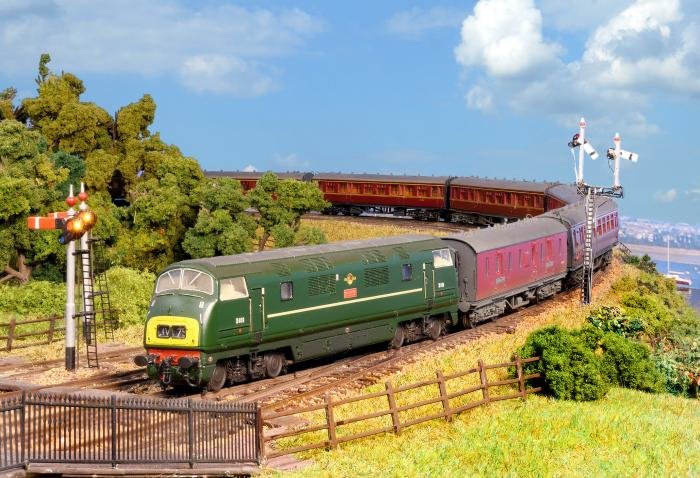 This layout is my attempt to capture Dawlish Warren station as it was during the 1960s together with a short section of sea wall.

The station itself is approximately scale length with scratch built platform buildings but compromises have had to be made elsewhere. I have included what I consider to be the most important features of Dawlish Warren such as the camping coaches, the Mount Pleasant Inn, the Victorian Footbridge, Langstone Rock, the ice cream stand and the little tunnel under the railway to the beach car park. I have also included a nod to the holiday parks but unfortunately there just wasn’t room for the Langstone Cliff Hotel. Back in the 1960s there was no funfair and only one shop by the railway.

The layout is 11ft 6in x 3ft 4in. The backscene is made up from photographs taken in the area. Behind the backscene there are 12 storage sidings which ensures a good variety of trains can run through the scenic area with some stopping in the platform loops to allow others to pass. It’s always a warm summer’s day in South Devon and diesel hydraulics rule the rails.

I hope you enjoy watching the trains go by - I certainly will. Look out for the working signals, these will show where the next train is going.

Read the full feature on Dawlish Warren from HM180 here.