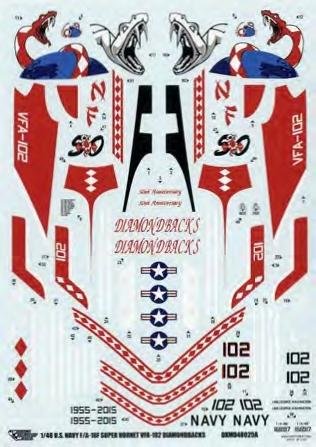 This comprehensive two-sheet offering from DXM depicts two brightly liveried airframes from VFA-102 ‘Diamondbacks’, celebrating the unit’s 50th and 60th anniversaries in 2005 and 2015 respectively. These machines have standard FS 36375 Light Compass Ghost Gray/ FS 36320 Dark Compass Ghost Gray camouflage, and while all trim is supplied for the 2015 airframe, modellers will need to paint the spine, vertical stabilisers and the wing and horizontal stabiliser tips with FS 11136 Red. A small section of this colour is supplied in decal form for matching purposes. Register and opacity appear excellent, while the gloss carrier film should reduce the risk of silvering. There are enough airframe stencils, national insignia and warning decals for a single airframe, with additional items for the drop tanks. The two examples are: 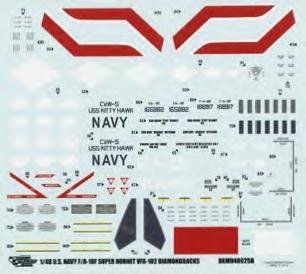 Modellers with 1/144 Thunderbolts by Platz-Bego and F-Toys will appreciate this lovely set of markings for French Air Force airframes by Shelf Oddity. These are beautifully printed items, with gloss carrier film, sharp tonal boundaries (notably on the unit insignia) and the colour density will prevent underlying tones from being visible. National markings include roundels and two styles of fin/rudder flash, plus there are serials and wing walkway areas. There are enough decals for two models, making this even better value for money. There are four overall natural metal schemes: 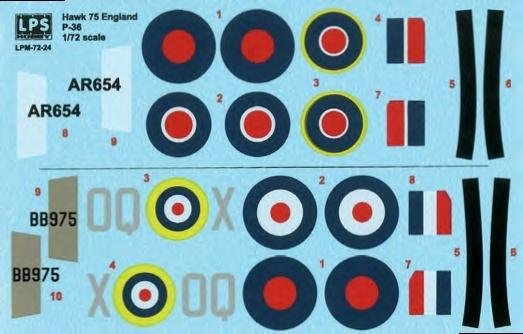 LPS Hobby’s markings should be suitable for any 1/72 Hawk 75/P-36 offering and caters for two machines. There is a single UK-based example (although no details are supplied as to its affiliation or base location) plus one assigned to 5 Squadron as part of the RAF’s Far Eastern Command during World War Two. The latter is an unusual (and very welcome) inclusion as this unit seems to have been neglected by decal manufacturers. This set supplies basic serials, national insignia, fin flashes and wing walkways, so airframe stencils must be obtained either from the kit or aftermarket products. While all items are well printed, the paler tones appear slightly translucent, and the backing sheet was visible through the white sections — so modellers may wish to undercoat these areas on the model. The two schemes are: 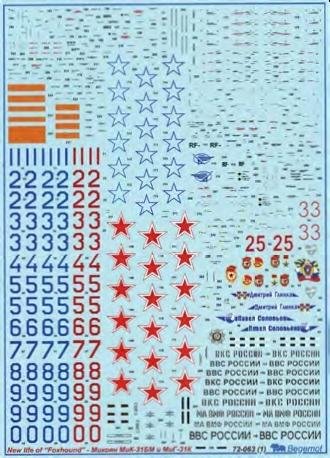 Begemot’s second examination of Russia’s MiG-31 Foxhound covers the latest BM/BSM and K variants in rich detail, with no fewer than 28 options, plus stencilling for all the type’s associated missiles and launch rails. It’s supplied on two sheets, with multiple styles of national markings, Russian Air Force/Air and Space Force legends and Bort numbers and these are printed to the firm’s usual high standards, with sharp colour demarcations, perfect register and strong opacity. This is also available in 1/48 (48-040) with just 15 options. The schemes include: 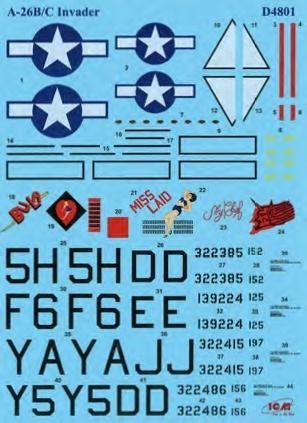 What better way is there to advertise an upcoming release than to issue a dedicated decal sheet in advance? That’s just what ICM has done in readiness for its newly tooled 1/48 A-26B/C Invaders, and this set supplies markings for four overall natural metal finish US Army Air Force airframes, three of which are the gun-nosed strafer variant with eye-catching artwork. The opacity and register appear spot-on, notably on the white areas and yellow text, with national insignia, serial codes and numbers, artwork, aircraft names and major stencilling elements supplied. The chosen airframes are: 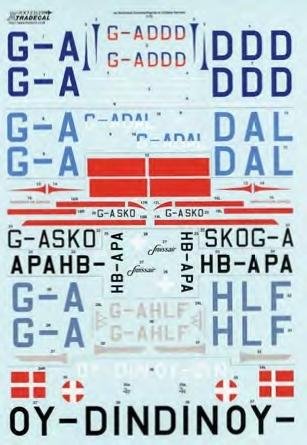 Xtradecal’s second collection of de Havilland Dominie/ Rapide airframes is dedicated to civilian machines, several of which feature rather striking liveries, and are designed for the Airfix/Heller and Tasman Model kits. All registration serials and national insignia are provided, plus airline legends but just basic cheat/trim lines are supplied, for the Mayflower Air Services and King’s Flight examples. The decals are commendably thin, with gloss carrier film, excellent colour definition and demarcations, and while the Swissair logo may look strange, it’s accurate for a 1940s airliner. No airframe stencilling is included, so these items must be sourced either from the kit or aftermarket products. The six schemes are: 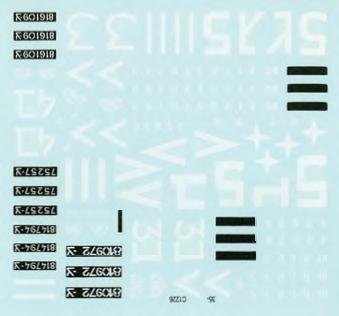 This is Star Decals’ ninth compilation focussed on Israeli armour and caters for M51 Super Shermans with markings worn during the 1967 Six-Day War. It covers tanks modified from either M4A1 or M4A3 tank hulls and includes notes on air-recognition markings plus guidance on unit chevron orientation and individual vehicle modifications. Basic colour annotations are supplied, although surprisingly there is no mention of the main Sand Grey shade worn by Israeli Shermans. One tank wore its turret number on what appears to be a fabric panel, and there is a 1/35 scale diagram of this to aid modellers. The four options are: 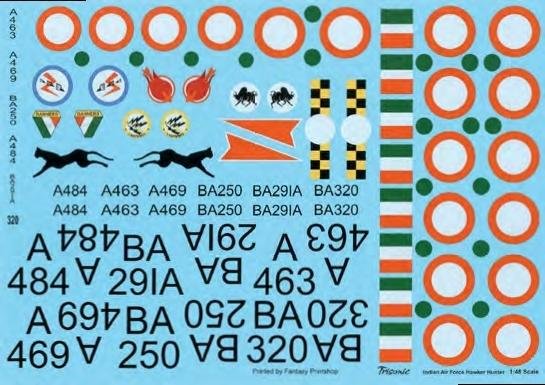 Trisonic Decals is a relatively new company; its first 1/48 scale release is intended for Airfix’s 1/48 Hunter F.6 and offers six options for Indian Air Force F.56A aircraft. The markings are accompanied by extensively researched notes on colour schemes, equipment fit, airframe changes and production batch information. Note all choices offered here are for Hunters modified to carry the large 230 gal (1,046 lit) inboard drop tanks, so will need notches cut in the flaps to accommodate them. Printed by Fantasy Printshop the decals are to firm’s usual high standards, with sharp colour boundaries and excellent register. The selection of Hunters is: