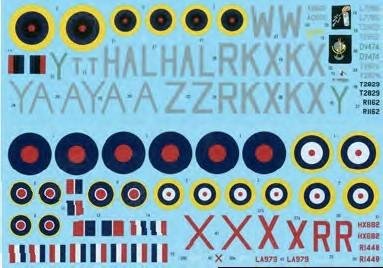 With ten schemes on offer, depicting several variants of UKand Mediterraneanbased Wellingtons in different camouflage types, this is a great value two-sheet product from DK Decals. It provides all relevant national markings and fin flashes, including night-bomber A1-style roundels, with the white areas overpainted with black to reduce visibility. Colour density and register are spot-on, notably for the nose artwork featured on several airframes, and the glossy carrier film should reduce silvering. Colours are listed for Humbrol and Agama paints. The choices are: 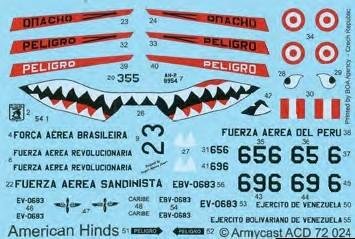 Designed for 1/72 Mi-24/25/35 kits by Zvezda, Hobby Boss and Italeri, this splendid two-sheet offering caters for Brazilian, Cuban, Nicaraguan, Peruvian and Venezuelan Hinds. All warning symbols are included, along with national and unit insignia, airframe serials and even the red/ white stripes for the tail rotor blade tips. The featured Mi-24 schemes are: 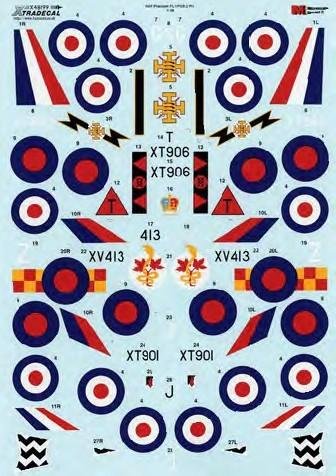 Timed to coincide with the re-release of Revell’s 1/48 Phantom FGR.2, this collection features a single FG.1 and three West Germany-based FGR.2 ground attack and reconnaissance machines, with one example from each of the three primary RAF stations. Just the relevant aircraft serials, unit and national insignia alone are provided, so all stencils must be taken from the kit decals or via the firm’s own aftermarket product (X48197). All markings exhibit sharp colour demarcations, and even the white elements have sufficient colour density to prevent bleed-through of the underlying tones. The four airframes are: 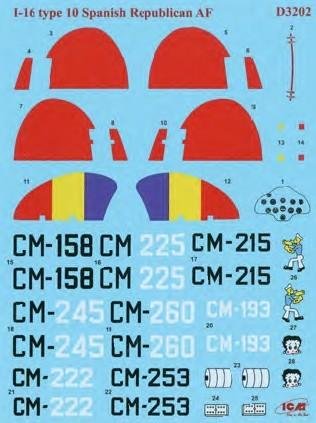 ICM’s second decal sheet features eight Spanish Civil War I-16 Type 10 Ratas (Rats), as flown by the Republican Air Force between 1938- 39. These airframes had very little airframe stencilling (usually a lift line for the tail skid), and this is included, along with various forms of tail artwork (barrels, dominoes, plus Betty Boop and Popeye figures). Modellers have a choice between using the supplied wingtip and rudder markings or masking and painting them instead. Helpfully, there are small sections of red and yellow for the rudder hinges and aileron tips; decals for the tail lift line and a spare instrument panel are also supplied. The eight schemes feature: 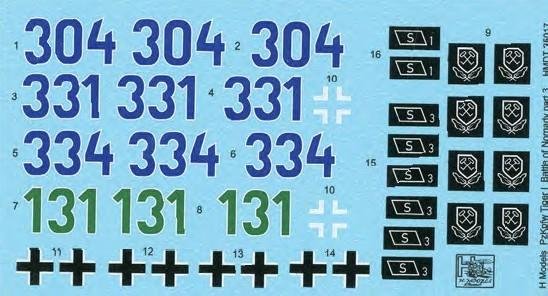 T he third in H-Models’ Battle of Normandy series concentrates on Tiger I Ausf.E machines assigned to Schwer-SS Panzer Abteilung 101, with turret numbers and insignia for four tanks. There are enough Balkenkreuze to allow four models to be built (just one Tiger had the white version on its rear hull plate). Similarly, H-Models has supplied four sets of tactical formation markings, making this good value and ideal for Airfix’s new 1/35 release. The gloss carrier film should minimise silvering, while the colour density will prevent underlying tones from bleeding through. Markings are included for: 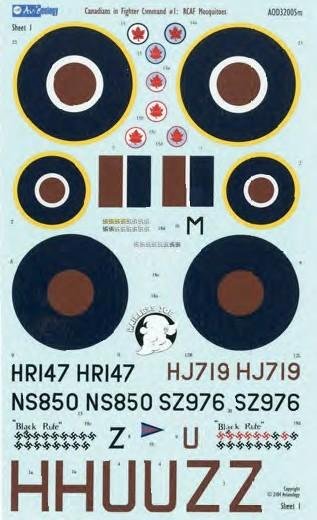 For those unfamiliar with Aviaeology products, they also include copious background material on each airframe, detailing changes needed to kits for an accurate replica, plus the usual colour and placement guides. This is an updated sheet, with revised artwork for HR147 Hairless Joe and alternative kill markings for NS 850 Black Rufe. Print quality is firstrate, with excellent colour definition. No stencils are provided but are available separately (AOD32S05), while these markings are also offered in 1/72, 1/48 and 1/24 scales (AOD72005m, 48005m and 24005m respectively): 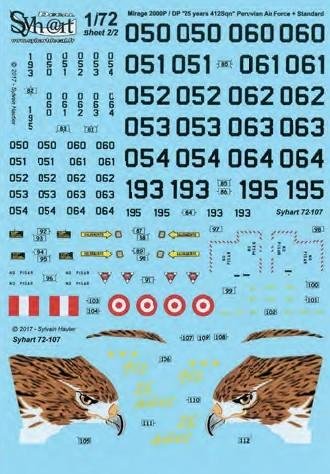 Although the specially marked 25th anniversary airframe features strongly in the artwork, it’s just one option available in this delightful set, which allows modellers to build any of Peru’s 12 Mirage 2000s (ten single-seaters and two dual-place trainers). All serial numbers are provided and there is a complete set of airframe stencilling, with every item characterised by perfect register and strong opacity. Both the early-style desert and later air-superiority liveries are catered for. Colour matches (including mixes) are provided for Humbrol, Mr, Hobby, Testors, Tamiya and Revell products. A two-page A4 sheet supplies modellers with all the information required to accurately model a Mirage 2000, with comprehensive notes on airframe configurations, chaff/flare dispensers and wing pylon types. These decals are also available in 1/48 scale (48-107). 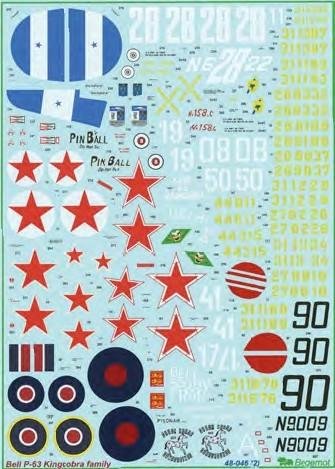 When it comes to offering multiple decal options, few companies can match Begemot, as this massive compilation of 51 Kingcobras shows. It includes examples from the US, Soviet Union, France, Honduras and United Kingdom. While most depict operational aircraft, others portray test/evaluation, aerial target, training and converted civil racing machines. Each option comes with detailed notes on colours and markings, plus a separate stencil placement guide. There are three sheets of beautifully printed decals featuring accurate shades and register. Among the many schemes are: