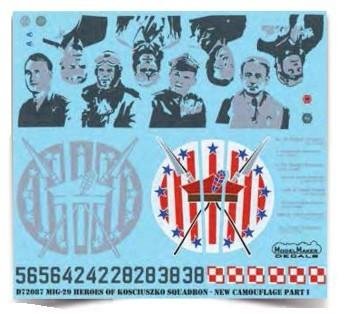 If you’re looking for a non-standard scheme with which to decorate a Fulcrum, these Polish Air Force special liveries could be the answer. This 1/72 sheet offers a mix of markings for two MiG-29Ms and two twin-stick UBMs, but all wear the now well-known Kosćiuszko badge, applied large on the upper fuselage. Each aircraft is painted in the usual low-vis grey, but one of the single-seaters has a full-colour rendition of the circular motif, while the remainder all sport two-tone grey versions. Further décor comes via images of Polish aviation heroes on the inside faces of the vertical stabilisers. All the machines here are also available from Modelmaker in 1/48 scale, via sheet D48087. The options, all hailing from the 23rd Tactical Air Base, are: 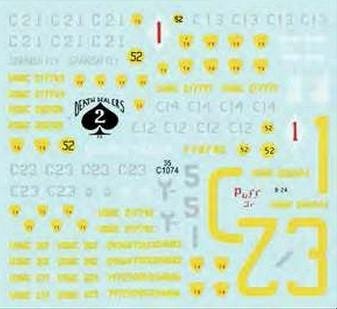 US Marines in Vietnam M48A3

US Marine Corps M48A3 (Late) tanks are the subject of this Vietnam-war associated package from Star Decals, being distinctive with a raised cupola, and would be suitable for 1/35 offerings by Academy, Dragon and Tamiya. The two sheets supply sufficient markings for all of the markings choices to be built, and there are separate numerals for those wanting to portray other USMC Pattons. All items are printed on matt carrier film, which may cause silvering issues, but the colour register and opacity is excellent. Although the instructions feature four schemes, when the alternative options are included there are actually seven machines, all from the USMC’s 1st Tank Battalion: 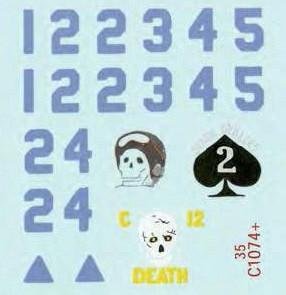 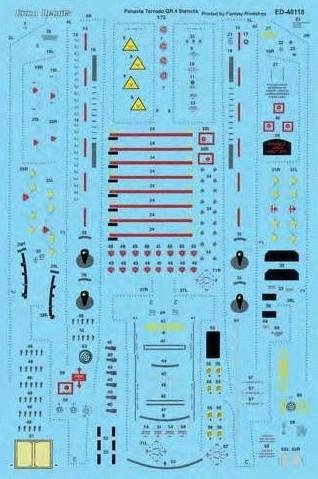 Regardless of the kit you’re building/converting, any 1/48 Tornado GR.4 build will look better courtesy of these well-printed stencils. There’re enough markings for one entire aircraft, and they include the pylonpivot areas, under-nose doppler panel and data for fuel tanks and BOZ-107/Sky Shadow countermeasures pods. Walkway hatching is also supplied, as are the yellow advisory marks for the MACES pylons. And don’t worry if this isn’t ‘your’ scale, as all these stencils are also available in 1/72 and 1/32, via the firm’s ED-72118 and ED-48118 respectively. 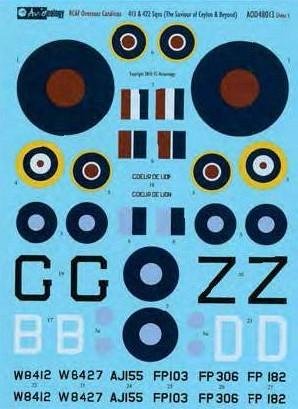 Any new release from this firm is always welcome, particularly for the superb, detail-packed instructions. This sheet offers seven schemes for the Catalina in 1/48 scale, so that’s the original Monogram kit or the parts repackaged by Revell. Besides the beautifully printed decals themselves, which come on three individual backings, there are serials lists by marks, a wealth of structural information and a scale lower-wing drawing. Most of the aircraft are in Extra Dark Sea Grey and Slate Grey over Sky or white, and two aircraft wear RAF South East Asia Command twotone blue national insignia. All the machines are from the Royal Canadian Air Force during World War Two: 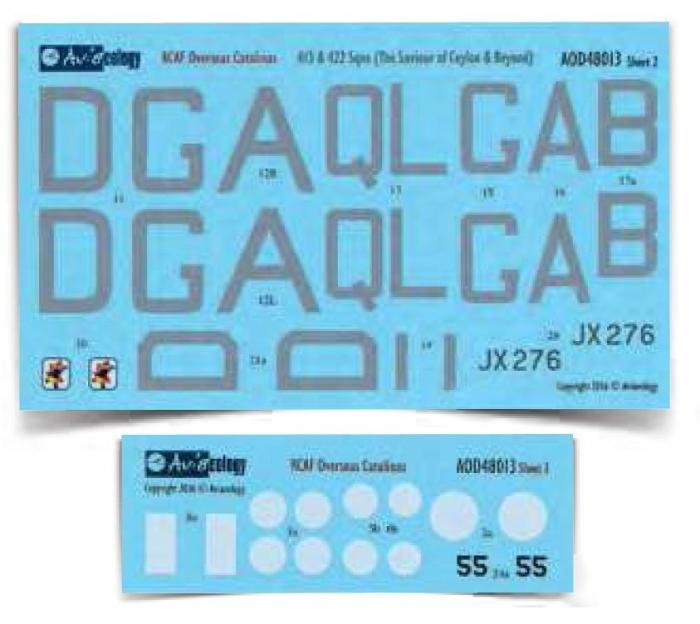 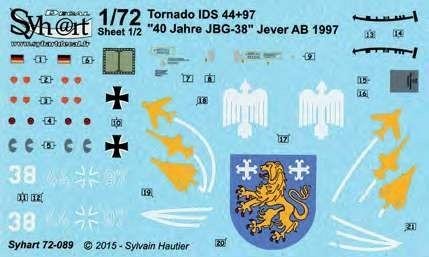 When it comes to providing complex anniversary schemes that are relatively simple to replicate, Syhart is hard to beat for its attention to detail and comprehensive instructions. This particular twosheet package also supplies a pre-cut self-adhesive mask set to reproduce the distinctive ‘Batman’ artwork. The subject is Luftwaffe JBG-38 airframe 44+97, based at Jever Air Base in 1997, to celebrate the unit’s 40th anniversary of operations. Thanks to clever design, all modeller must do is paint the blue/black scheme with the aid of the masks, as all the yellow trim is supplied in decal form. Colour density is excellent, notably on the yellow and white items, and the register is superb, especially on the unit shield, which adorns the fuselage underside. The minimal stencilling is reproduced accurately and includes wing pivot-point symbols for the pylon locations. 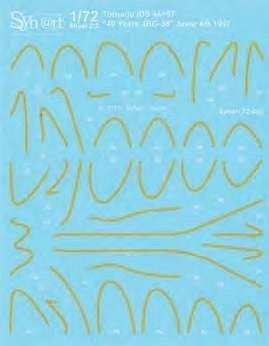 FROM SPYING TO RECORDS

Arctic Decals can be relied upon to find a different approach to a subject, and this lovely package enables Azur’s 1/72 Ca.310 to be depicted in civilian guise, as I-ENEI, which was involved in an ill-fated attempt to set a record for the time taken to fly between London and Cape Town in 1938. It comprises two decal sheets, and a set of pre-cut selfadhesive chrome vinyl door and window frames for the passenger entrance. The markings are printed on a single piece of carrier film, so they will require cutting individually before they can be applied. Several are multi-piece items, and will require care to align properly, although they do feature superb register and clarity, which should ease positioning. Modellers are advised to apply an acrylic-based varnish over the decals to seal them, as otherwise they will be damaged by lacquer/enamelbased products. 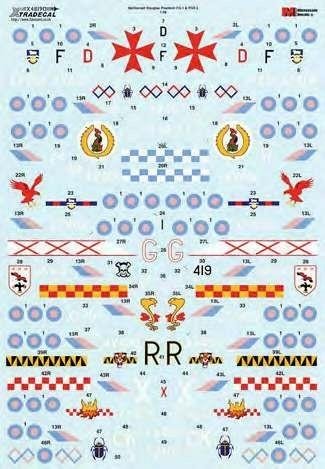 These luscious low-vis grey Phantom FGR.2 liveries are ideal for Hasegawa’s kit, or the same styrene re-released by Revell. All wear the standard late-service Barley Grey, Medium Sea Grey and Light Aircraft Grey. Note that the instructions, in some cases, seem to state detachment locations rather than the squadrons’ traditional stations, and post-operational placement. The choices are: 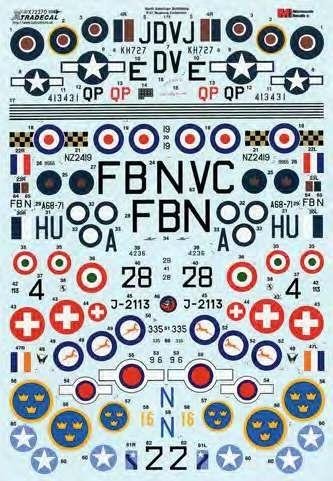 Modellers seeking less-common subjects for their 1/72 P-51Ds would do well to consider Xtradecal’s eclectic mix. Alongside the regular US, British, Australian and New Zealand options are examples from Italy, Switzerland, South Africa, Haiti and Somalia, providing a range of eye-catching liveries. The 11 choices are: 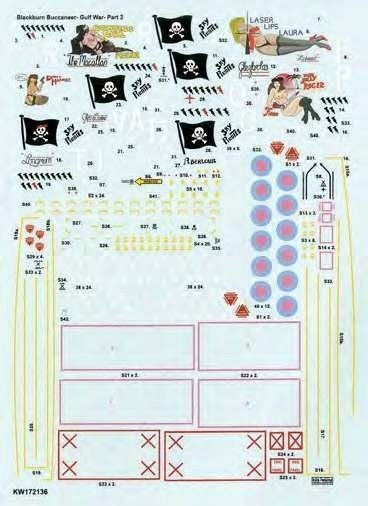 Whether modellers have CMK, Revell/Matchbox or Airfix 1/72 Buccaneers in the stash, or are just preparing for the latter’s newly tooled offering (see News, P.6), Kits-World’s second foray into Operation Granbydeployed Buccaneer S.2Bs is ideal. It provides markings for seven of the 12 aircraft deployed to Muharraq, Bahrain and the artwork is replicated faithfully, with excellent colour reproduction. Full airframe stencilling is included, but modellers will need to check references as most of the Desert Pink painted Buccaneers featured just basic warning labels; the remainder were overpainted. This set is also available in 1/48 scale (KW148148). The schemes are:

Designed to fit Sweet’s 1/144 offerings, Shelf Oddity’s decals are also suitable for offerings by F-Toys or Minicraft. Just basic items are supplied, in the form of national insignia, plus limited stencilling. It features a single airframe, A6M2 Reisen 21, construction number 4593, which was recovered in Alaska during 1942 and utilised for test purposes subsequently. Two schemes are provided, the first depicts the initial repainting in US Navy two-tone camouflage, which occurred in October 1942. Helpful notes provide direction on the colours for the wheel bays, inner faces of the undercarriage doors and the spinner and propeller. There is a similar treatment for the airframe as it appeared in 1945, by which time it was mainly natural metal, with painted rudder, ailerons and elevators. 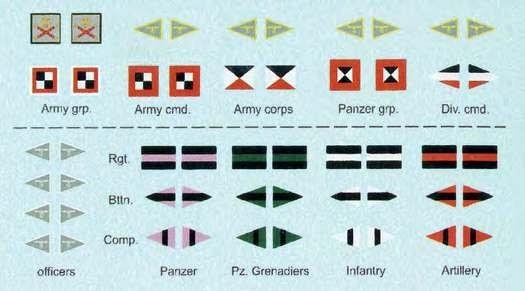 Black Lion has produced a series of decals intended for wargamers, but these are equally applicable to modellers, such as this collection of pennants, as seen on German Army staff cars. These are printed on a single sheet of carrier film, so will need cutting individually before application, but the colour register is good, as is the opacity, even on white areas. 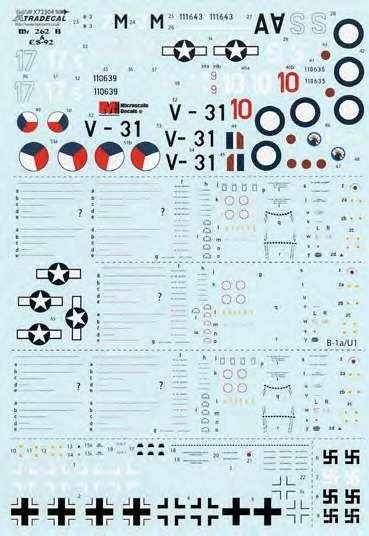 Xtradecal’s Me 262 trainer/night fighter collection is ideal for Airfix’s newly tooled offering, but also Revell’s neat 1/72 kits. It features a mixture of captured and trials airframes, including a Czech-built example, with several wearing RAF and US Army Air Force insignia and serial numbers. The ten schemes (note airframe ‘Red 10’ is depicted with German and RAF markings):