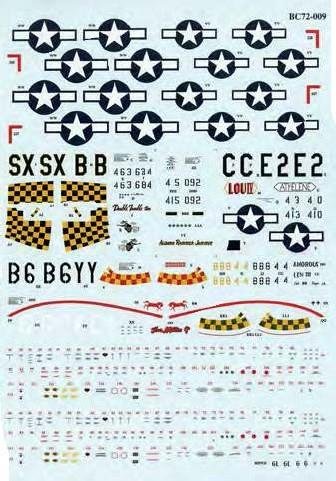 Barracuda’s excellent Mustang decal collections have been reprinted, and the first instalment caters for UK-deployed ‘bubbletops’, with such favourites as Lieutenant Colonel Thomas Christian’s ‘Lou IV’ and Major Eduard Giller’s ‘The Millie G’…both airframes flown by Giller can be made from this set. There are sufficient national insignia to enable four of the five choices to be built, with full stencilling for two airframes. This set is also available in 1/48 (BC48011) and 1/32 (BC32009). The five schemes are: 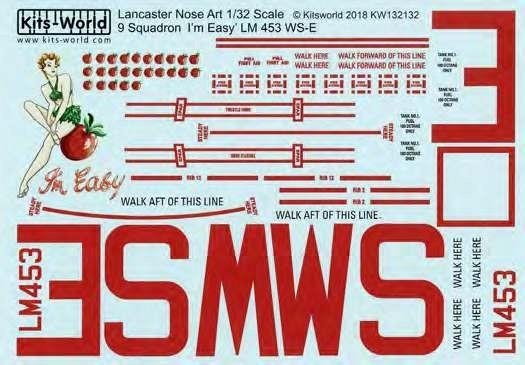 With large-scale Lancs due from Wingnut Wings and Hong Kong Models, decal specialist Kits-World has reissued several offerings in 1/32. This set supplies markings for one airframe, LM435/WS-E ‘I’m Easy’, of 9 Squadron, RAF Bardney, 1944, depicting this machine with 25 mission tallies (in the form of tomatoes) on the fuselage. While most of the decals are just red in colour, the nose art is particularly wellrendered, and register is perfect. Note just those items specific to the airframe are included, national insignia, fin flashes and all other markings must be sourced from the kit, although they are also available separately from Kits-World via its General Markings sheet (KW132049). 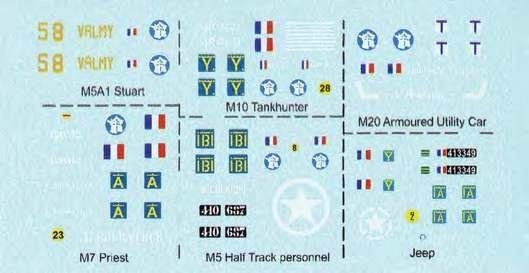 Black Lion has a well-deserved reputation for its small-scale compilations, and this latest item addresses armoured vehicles assigned to the French 2nd Armoured Division during 1944- 45. There’s a varied selection offered, from M51A1 Stuart and M10 tank-destroyer to M20 scout car, M7 Priest self-propelled artillery and M5 Half-track. Colour and placement guides will be available soon on the firm’s website, but all vehicles were overall Olive Drab and all subunit identifiers are included in the decals. The schemes are: 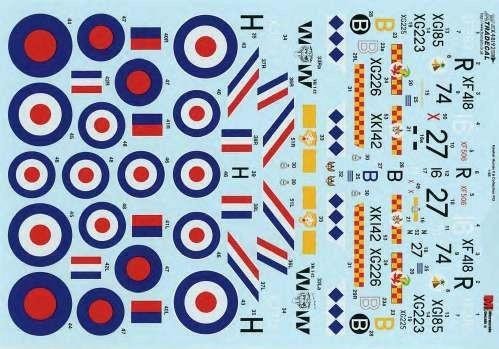 Hannants’ own decal brand makes its third visit to the Hunter, and this package offers an absolute riot of colour. Note several options are for the F.6A, which sported the FGA.9’s parabrake housing. Arguably the most interesting schemes are the rare F.6As of the Tactical Weapons Unit, which received trial high-visibility red or yellow paint on the spines, empennage, fuel tanks and outer wing halves. The remainder are a mix of display and frontline jets: 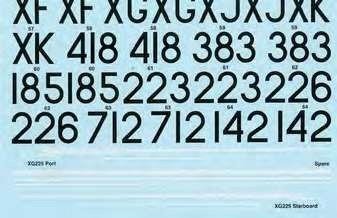 Designed for Revell’s Junkers F.13 Floatplane, this comprehensive package from Arctic Decals supplies both markings and paint masks, to enable one or more of three Finnish Maritime Guard airframes to be portrayed. Detailed notes are supplied for the changes in livery, while conversion sets from either Master-X or Rising Decals are recommended for the correct control surfaces (Revell’s are the earlier type)…ski-type landing gear and the starboard access hatch will need scratch-building. Three airframes, LK 2/3/4, are provided in three different liveries covering their initial delivery in 1932, simplified 1933, and final 1938 schemes; the latter includes civil registry lettering for the upper and lower wings and fuselage sides. The decals must be cut individually as they are printed on a single sheet of carrier film; note they must also be sealed afterwards with an acrylic-based varnish. 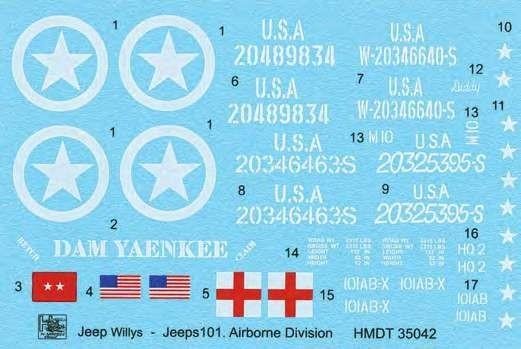 The humble Willys Jeep is the subject of this decal sheet, one of several on this subject from H-Models, and is suitable for any 1/35 offering. This offering provides examples from the 101st Airborne Division, with two each from the Normandy D-Day Landings, and the December 1944 siege of Bastogne. One of the latter is the unit commander’s Jeep, used by Brigadier General McAuliffe during this period. There are sufficient decals for all choices to be built, plus paper Red Cross flags for the ambulance versions, representing great value. These are also available in 1/72 (HMDT 72042); the vehicles are: 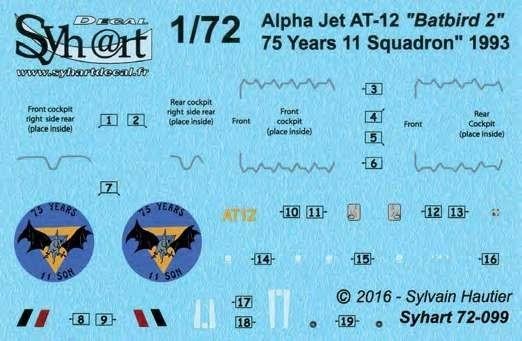 Arguably one of the brightest schemes to have graced an Alpha Jet, the Belgian Air Force’s ‘Batbird’ livery is also challenging to reproduce. Step forward Syhart, with a well-designed paint mask/decal package, which should be applicable for Airfix, Heller or Fujimi kits and will simplify the task greatly. Comprehensive notes highlight where each mask is placed, with recommendations for the wings and horizontal stabilisers to be left off, to aid placement of the fuselage items. The colour guide supplies references for Humbrol, Revell, Tamiya, Mr. Hobby and Model Master tones, while the superbly printed decals provide all necessary insignia and airframe stencils. There are even markings for the canopy miniature detonating cords, which should be applied to the interior, along with the associated exterior ‘horns’. This set is also available in 1/48 scale (48-099). 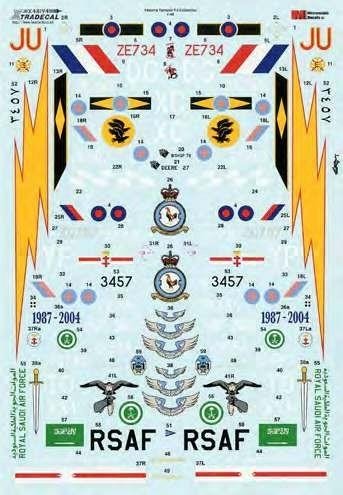 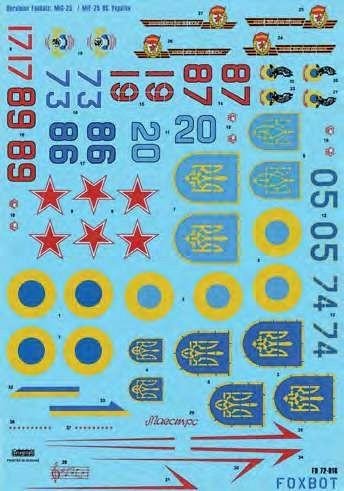 Foxbot’s MiG-25 Foxbat collection is timed perfectly for ICM’s newly tooled 1/72 kits, but is equally applicable to older Condor or Hasegawa offerings. It covers those aircraft deployed in the Ukraine while part of the USSR, or after the latter’s dissolution in 1991. This yields a varied mix of fighters and reconnaissance types, all clad in natural metal and wearing either the Soviet red star or the Ukrainian blue/yellow shield. Ten airframes are provided:

Also available in 1/72 (D72032), SBS Model’s latest decals feature Finnish Air Force Fiat G.50 Freccias (Arrows); there’s a pleasing mix of camouflage, starting with standard Italian tan/green disruptive pattern and gradually evolving into the familiar Finnish green/black uppersurfaces, with varying degrees of the original camouflage visible. Additional information on the painting options is available via the firm’s blog: www.resinguys.com. With 24 national insignia, there are sufficient to portray all four choices, all suitable for either Flying Machines or Hasegawa kits. Four schemes are offered: 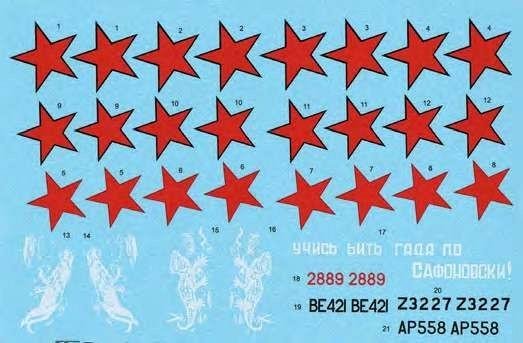 This is H-Models’ first foray into Russian Hurricanes (supplied under the Lend-Lease programme), and is also available in 1/72 scale (HMD 72126), and offers both Dark Green/Dark Earth and overall black camouflaged airframes. There are sufficient markings to enable all four options to be modelled, including correctly styled national insignia and tail artwork for two airframes. Stencils are available separately (HMD48103). Helpfully, paint masks are supplied for those areas which previously featured RAF markings and were oversprayed by the Soviets on arrival, plus enlarged light green sections for the tail artwork. The schemes are: 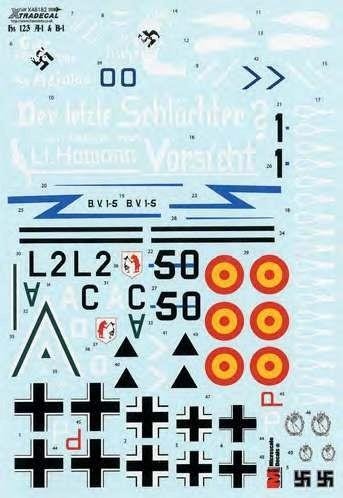 Gas Patch’s delightful Hs 123 is the intended recipients for this varied collection from Xtradecal, which has also been issued in 1/72 (see Reviews, January 2018). Here there are just five schemes, offering pre-war RLM 61/62/63 and the later RLM 70/71/65 camouflage, both in splinter patters, while the single Spanish option (where it was known as the Angelito) is in doped Aluminium. The decals are printed on gloss carrier film, which should minimise silvering, while the register is spot-on, and colour density should be sufficient to prevent underlying tones from being visible. There are five liveries: