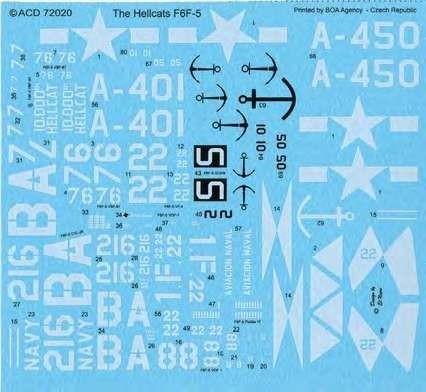 Armycast’s new Hellcat decal collection is refreshing because it offers export markings as well as US Navy items. One carrier sheet has mostly white numbers and ID devices, while much more colour adorns the other backing, which offers national insignia, unit badges and the like. A bonus is the resin antenna fairing provided for one of the Uruguayan options. Nine early/late F6F-5 airframes are represented, and the decal quality, register and colours are splendid; these markings are also available in 1/48 ACD 48020. Examples include: 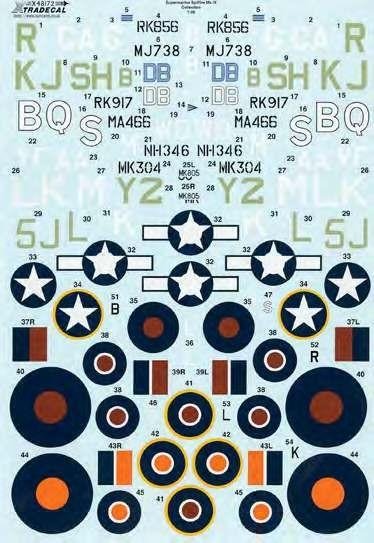 Anyone contemplating Spitfire Mk.IX projects have a great aftermarket option here, courtesy of Hannants’ own brand. While RAF day fighter camouflage rules the roost, pleasing variety comes via high-altitude Medium Sea Grey over PRU Blue, and desert tones on a USAAF airframe. Some of the ten choices are:

Transportes Aéreos Ejecutivos (TAESA) was a Mexican budget airline that operated from 1988 to 2000. This sheet caters for the carrier’s 737-200 XA-SLC, and offers window/door decals, windscreens, national flags and company branding. The blue tail logo comes on yellow backing, but the latter is somewhat patchy due to the printing. All other markings look great, though, and the painting is easy given that the aircraft’s fuselage is overall white. 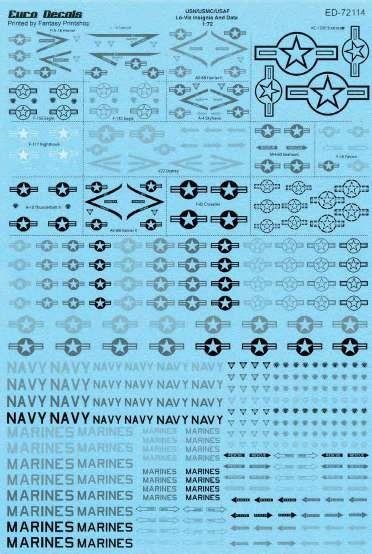 No modeller of modern US jets should be without this incredibly handy sheet of low-vis grey markings. Stars and bars, rescue banners, ejection seat stencils and intake warning chevrons of various styles feature here, along with NAVY and MARINES legends. Recipient types include the KC-135, A-4, F-15C/E, F-117, AV-8B, MH-60 and A-10. Perfect if one needs replacement decals due to kit items being damaged, or simply for a change of scheme, these are perfect.

Sukhoi Su-24M from the Russian VKS in Syria

Considering this two-sheet package contains options for 15 Su-24M Fencer-D airframes, plus pre-cut painting masks (for the initial aircraft deployed to Syria, which had painted-over serials and insignia), it’s an absolute bargain. Designed for Trumpeter’s impressive 1/48 scale kit, all airframes bear standard light grey/white camouflage, with radomes and dielectric panels in the latter tone. Meticulous research has uncovered a treasure trove of information on Syrian-deployed Fencers (nicknamed ‘suitcase’ due to their slab-sided fuselage), and Begemot has packed this into the busy instructions. The schemes, all belonging to the Aviation Group of the Russian VKS in Syria, include:

TAKING ON THE VC

In this second collection of Vietnam War participants, Blackbird Models gives more weight to local airframes (three of the seven), but still manages to offer an eclectic mix of subjects. There’s a USAF RB-57E, F-110D and RF-101C, US Navy AP-2H and VNAF C-47, U-6 and UH-1H, with schemes varying from overall black to white/grey, overall Olive Drab, South East Asian camouflage and three-tone greys.

The decals feature excellent register and opacity, but the unit codes and serials for the F-100D and RF-101 should be white, rather than the supplied light grey. The schemes are: 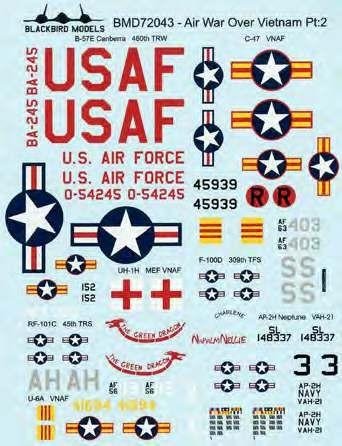 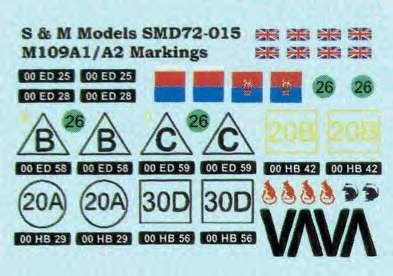 S&M has branched out into decals for 1/72 military vehicle subjects; the first such set covers British Army M109A1 and A2 howitzers and is intended for Revell, Riich or OKB Grigorov kits. Five are depicted in either overall mid-Bronze Green or IRR Green with black disruptive pattern, and the final two represent vehicles deployed as part of Operation Granby during the 1991 First Gulf War. Perhaps due to the printing process, several decals appear to have a soft edge, but otherwise register and opacity are good.

Note the markings are printed on a single sheet of carrier film, so will need cutting out individually prior to being applied. 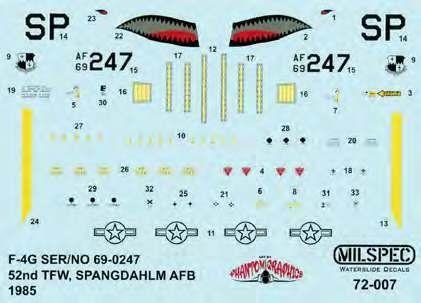 For some reason, defencesuppression or ‘Wild Weasel’ platforms always seem to have an aggressive air about them, and none more so than European- 1-camouflaged F-4Gs. Milspec’s busy single decal sheet supplies all necessary markings, insignia, stencils (including low-voltage light strips) and shark-mouth for a single machine, with all aspects researched exhaustively. Four-view painting/decaling diagrams provide all necessary guidance to build this US Air Force Europe-deployed airframe — all items feature superb colour definition and quality and this product would be suitable for any 1/72 F-4G. Note, modellers could arm this aircraft with either AGM- 65 Maverick and AGM-78 Standard or AGM-88 HARM weapons as the latter was just entering service in 1985. This F-4G scheme (which is also available in 1/48 and 1/32 scales) is for:

And now for something decidedly different…Airline markings for passenger boarding stairs, specifically those used by Hungarian carrier Malév on its Khaz-104 self-propelled units. They would have been seen around Il-14, Tu-134s and possibly even the airline's early Boeing 737-300s at airport terminals. These markings are designed for Eastern Express’ SPT-104 kits, but should also be applicable to NorthStar’s SPT- 154 stairs (which were the later version). Each decal will need to be cut from the sheet prior to application, as they are printed on a single sheet of gloss carrier film. Three different styles of markings are supplied, featuring red and blue logos and legends. Dark grey stripes are included for the tops of the hand rails and rubber pads where the ladders come into contact with the aircraft. 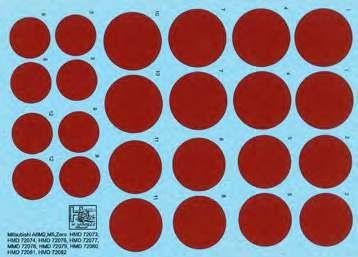 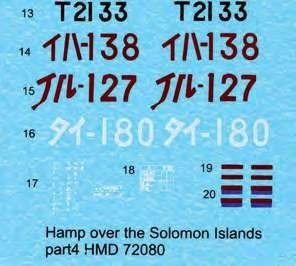 Hamp over the Solomon Islands

This is the fourth in H-Models range of Mitsubishi A6M decals and provides basic unit/ national markings for four Model 32 ‘Hamp’ sub-types that were operated over the Solomon islands in 1943- 44. Three are in overall Imperial Japanese Navy (IJN) light grey-green, while the fourth has IJN Green uppersurfaces.

Three sheets are included; two supply basic and white-rimmed hinomaru in various sizes (with eight spares), and the third offers aircraft codes, airframe inscriptions and landing gear door stripes. Stencils are available separately (HMD72071) and this set is also available in 1/48 scale (HMD48061). The aircraft are: 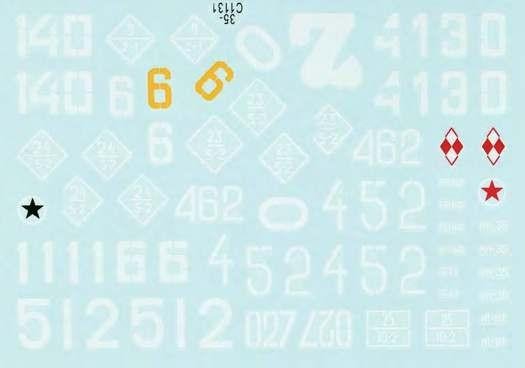 Star’s dedicated T-55 set provides eight examples (with options for three additional subjects) of tanks involved in Operation Danube, the Sovietled invasion of Czechoslovakia in 1968. The overall Russian Green vehicles are a mix of T-54, T-55 and T-55A variants, from Soviet and Polish units, and would be suitable for any 1/35 T-55 kits. Operational identification marks/stripes varied considerably between units and nationalities, and these are captured accurately on the profiles, along with and Czech ‘paint bombs’ thrown as the tanks moved through the crowded streets in Prague. As always, opacity is excellent, although the matt carrier film may lead to silvering. The schemes are:

US Navy A-4s were renowned for their brightly coloured unit markings, and VA-212 featured a striking rampant golden lion on a black shield motif. MILSPEC’s latest early A-4 set deals with one airframe from this squadron, BuNo 154979, Modex 304, as it appeared in 1973 when assigned to CVW-21 (NP tail codes) on USS Hancock (CV-19), during which the aircraft flew in the Indian and Arabian Seas. In addition to providing the basic unit/airframe data, this package also includes full airframe stencils, walkways and anti-glare panels, which are available separately as 72-010. Colour registration and density on both sheets are excellent, with VA-212’s lion insignia notable for its clarity and contrast. These decals would be ideal for any dorsal-hump-fitted 1/72 A-4E/F. This product is also available in 1/48 and 1/32 scales (48-017 and 32-017 respectively). 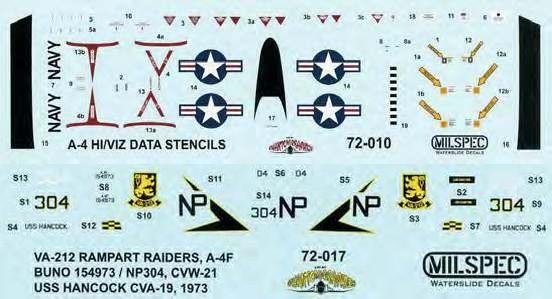