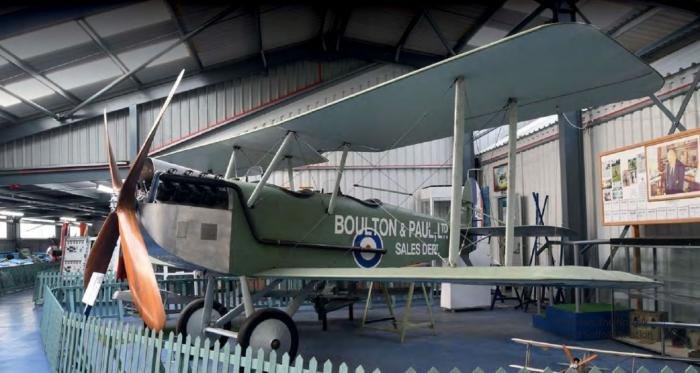 significant number of exhibits are devoted to the rich local aviation heritage, including this beautiful replica Boulton & Paul P.6, complete with a comprehensive history of the Norwich-based manufacturer. In fact, the museum’s main hangar was built by the company in 1937.

The ubiquitous Jet Provost T.3A was represented by XN500, which was purchased by the collection in 2012. This aircraft led a hard life as a trainer, with no fewer than three crashes and rebuilds in its log book! It now enjoys a quiet retirement, and is displayed in the museum grounds.

Most of the larger aircraft exhibits are outdoors, along with a Bloodhound surface-to-air missile, and those preferring the fresh air can enjoy the Adair Walk, set in approximately two acres of the museum’s grounds. Indoors, there are sections devoted to the USAAF 446th Bomb Group (which operated B-24s), RAF Bomber Command (including components from a 9 Squadron Wellington and a Lancaster prop from the film ‘The Dam Busters’), RAF Coastal Command and Sea Rescue, Flight Training and the Royal Observer Corps. This is a great venue, with an almost overwhelming amount of reference material for the scale modeller, including a useful line-up of Martin-Baker ejection sets. Special mention must also be given to the enthusiastic and friendly volunteer staff, whose in-depth knowledge (and often first-hand experience) of the exhibits contributed to a very enjoyable and educational day out. Dave Oliver