Having delighted modellers with its newly tooled 1/48 Spitfire Mk.Ia, Eduard has now turned its attention to the Rotol propeller-fitted Mk.IIa variant. 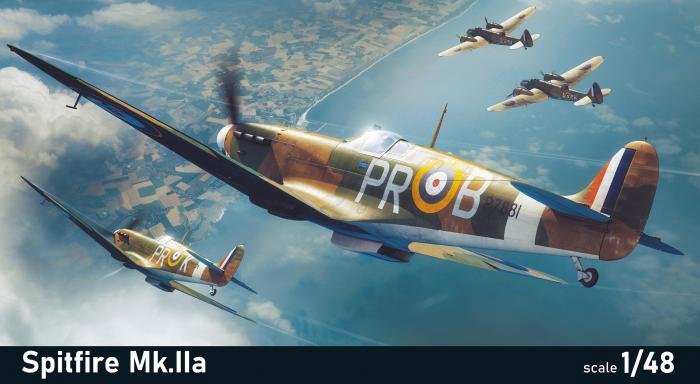 Similar to the firm’s Fw 190 kits, the most noticeable change in the parts is a new lower wing section, and this is accompanied by Runner S, which provides the necessary propeller, oil cooler intake and cockpit sidewall parts for an accurate Mk.II airframe.

All other components are as per the original boxing and, with this being a ProfiPACK release, they are accompanied by a photo-etched metal fret for items such as the instrument panel, seatbelt, oil cooler grilles, flare cartridge holder and armour plates for the pilot’s seat. A pre-cut self-adhesive mask set includes sections for the canopy, wheels and reflector gunsight, all of which should aid painting.

In typical Eduard style, there’s a generous collection of markings schemes, with airframes flown by British, Polish, Czechoslovakian, Australian and Free French pilots. The camouflage schemes cover the period from November 1940 to early 1942, with the phasing out of Dark Earth/Dark Green/Sky and its replacement with Ocean Grey/Dark Green/Medium Sea Grey.

Further details are at: www.eduard.com