Biplane fans will welcome the fifth boxing of Eduard’s new-tool 1/48 Sopwith Camel. As CHRIS CLIFFORD discovers, this ProfiPACK item is a multi-media gem. 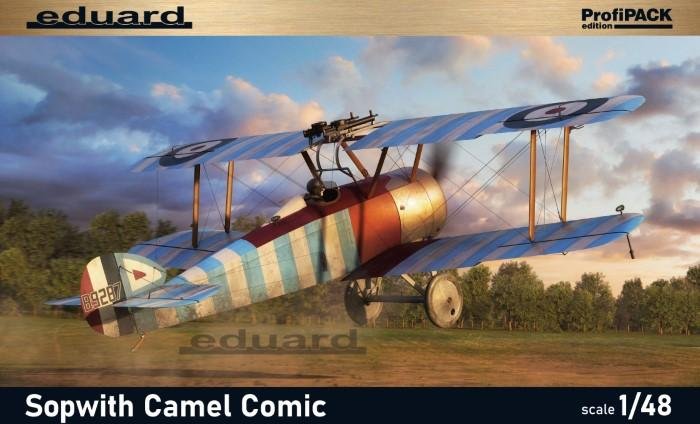 Eduard pleased many a biplane modeller last year when it released its then new-tool Camel in 1/48 scale. It appeared in limited-edition first, then there have been two more ProfiPACK boxings, allowing the portrayal of different sub-types and various engines. Now, Eduard has decided to employ this format again for providing a Camel Comic (item 82175).

ProfiPACK status means you receive not just the styrene parts, but also photo-etched (PE) metal details and kabuki tape paint masks. If you are unfamiliar with this tooling, it offers outstanding detail, and relies on the firm’s generic runner approach to ensure yet another variant. The ‘Comic’ Camel was created in pursuit of a practical night-fighter, and based on the F.1. To avoid the pilot being blinded by flashes from fuselage-mounted machine-guns, two Lewis guns were fixed on the upper wing, but could be folded down for reloading, and positioned for oblique firing.