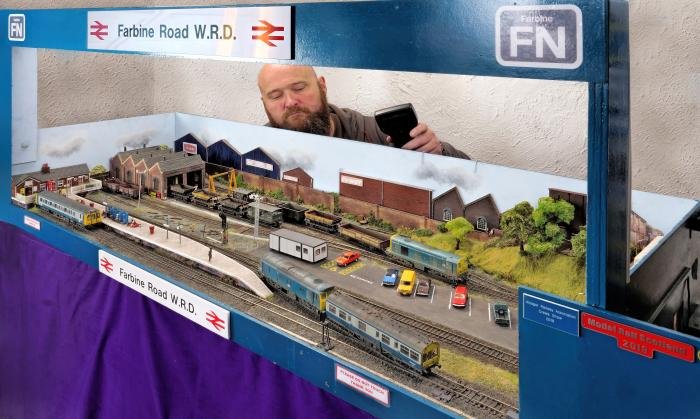 Farbine Road Wagon Repair Depot is a fictional depot loosely set in the West Midlands area. There are two elements to it, at the rear is the Wagon Repair Depot (WRD) and at the front a small passenger terminus station which manages passenger and parcels operations. These include locomotive hauled DMU substitutions.

The two sections of the layout are totally separate which means movement can be seen on both elements at the same time making for a lot of activity in a relatively small space. The layout can be based anytime from mid 1970s to the late 1980s depending on how we feel on the day.

BR blue will be the main colour seen but other liveries can occasionally appear. Many different types of civil engineering stock can be seen on the depot for repair with

many different classes of diesel traction visiting the depot and station during an operating session.

The main inspirations for Farbine Road are memories of trips as a youngster into Birmingham from Bescot passing Duddeston Wagon Repair works on Class 304 units whilst out for the day on the old 75p Daytripper ticket.

Read the full feature on Farbine Road from HM175 here.