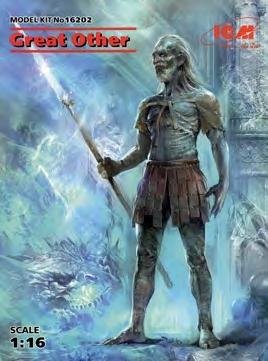 Game of Thrones may have left the TV screens but modellers can still enjoy this lovely offering from ICM of a 1/16 scale standing ‘zombie’ from the Night King’s icy army. There are three styrene runners – one each for the figure, three-piece stand and spear respectively – with all parts moulded to the firm’s exacting standards. The detail is highly refined throughout, from the four-part rendering of the leather Pteruges (‘skirt’ armour) to the superb facial expression, while the torso has a convincing reproduction of the strangely emaciated appearance seen on these antagonists in the TV series. While this would undoubtedly make an excellent accompaniment to ICM’s King of the Night (16201), its arguably just as imposing as a single figure. 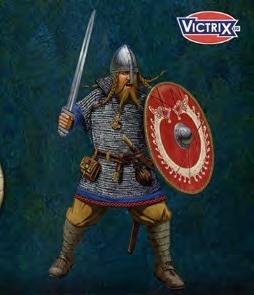 Vikings – Warriors of the Dark Ages

Victrix’s bumper package is ideal for fans of wargaming or figure painting and contains enough parts for 60 Viking warriors. There are eight styrene runners and all parts are marked by an absence of flash or moulding flaws, with crisp detail, notably on the chain mail and faces, as well as convincing (for the scale) poses. Fourteen basic bodies are supplied with two each of six warriors, and six each of a further eight, but the real fun begins when the arms are added. As usual with this firm’s figure sets, the number of possible options is huge, with separate arms wielding real swords, shields, spears, axes (long- and short-handled), helmets, signal horns and even severed heads. If this wasn’t enough, the addition of Little Big Men Studios’ shield and banner decals (also available the Victrix website) means there are even more variations. 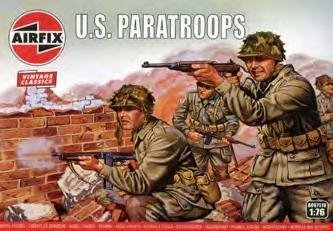 Released as part of Airfix’s Vintage Classics range, this is a welcome return for its small-scale World War Two US Paratroopers set. There are 48 figures in total with 14 different poses, comprising soldiers walking, shooting (in standing, seated and prone positions), throwing grenades or operating a radio. Additionally, there is what appears to be either an officer or NCO. While the moulding is generally acceptable, there were several heavy seams on AMW’s sample and combined with the soft vinyl-type styrene this will make neatening more challenging than with other, harder plastic offerings. 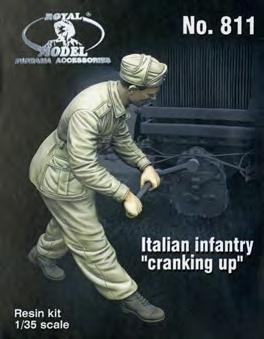 Comprising eight beautifully cast resin components, Royal Model’s Italian infantryman depicts a soldier in the act of crank-starting a truck engine. The pose is utterly convincing, from the positioning of the feet to the hands gripping the handle. The figure is clad in a uniform that appears similar to midwar German clothing, with superbly rendered detail on the tunic, while the facial expression was rendered superbly. No flash was present on AMW’s sample and once parts are separated from the casting blocks there is minimal preparation required prior to assembly. 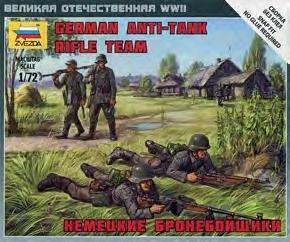 Zvezda’s four-figure set is intended to accompany its ‘Art of Tactic World War Two’ gaming system but is equally applicable for small-scale military dioramas. It’s a snap-together product, with no glue required for assembly and has provision for two different configurations, either all soldiers on a single base or the prone sniper and spotter on one platform and the second two-man team (posed as if walking) on individual stands. Each figure is a multi-piece ensemble, with separate arms and legs, with a mixture of Kar 98a rifle and Panzerbüchse 38/39 anti-tank rifle armament. 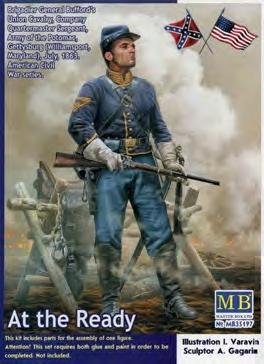 Part of Master Box’s five-set American Civil War series, this single figure offering depicts a Company Quartermaster Sergeant assigned to Brig Gen Bufford’s Union Cavalry, Army of the Potomac during the Battle of Gettysburg in July 1863. The large box supplies just a single small styrene runner with 16 wellmoulded parts; the breakdown has enabled Master Box to maximise the detail, from the belt and tunic straps to the separate hand guard on the sword, although the rifle cocking lever will need scratch-building from fine wire.