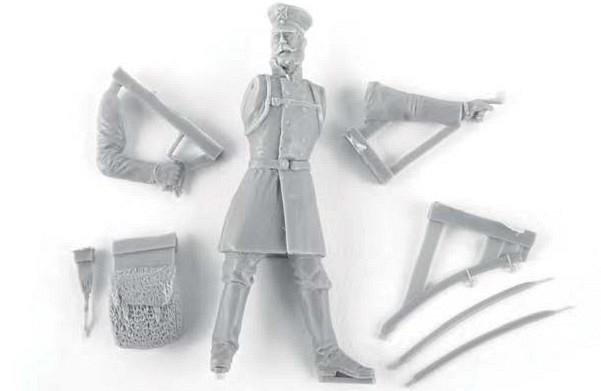 Paul Blaber Miniatures is new to AMW and its latest offering, an eight-piece Prussian Officer figure, features exquisite sculpting and casting, notably on the face and rucksack. It is posed, standing with drawn sword in the right hand while directing his militiamen with his left. The body, head and legs are provided as a single item, with separate arms, rucksack, scabbard, knucklebow/guard tassel and two blades. A length of thick metal foil is included for the scabbard straps. No instructions are supplied, but assembly is straightforward, while a printed image provides information on the uniform colours. 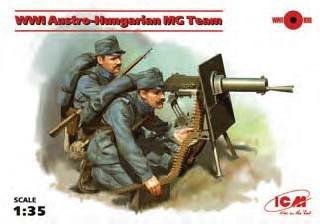 Value for money offerings seem to be the order of the day from ICM, which has combined one runner from its comprehensive WWI Austro-Hungarian Infantry Weapon and Equipment set (35671) with a two-figure ensemble to produce an M1908 or M1912 machine gun team. The poses are superb, with one trooper sitting as if firing the weapon, while the second is feeding ammunition from a wooden box. Both soldiers are equipped with a full complement of backpacks, ammunition pouches, food bags and entrenching tools. The gunner has a pistol, while the loader carries an M1985 rifle. 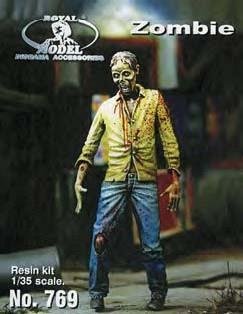 Ready for the apocalypse? Royal Model’s superb fivepiece Zombie figure is an ideal addition to any ‘undead’ scene, with high-quality sculpting and casting. There’s a choice between full- or half-length left arms, the latter appears to have been severed or gnawed at the elbow, and the separate head has convincing features.

Few model manufacturers regularly include crews, so this two-figure set of US Navy pilots will be very useful. Each consists of three parts, with separate arms, and depicts a seated individual, clad in the style of flying suit, helmet and oxygen mask used commonly during the 1950s, making these suitable for aircraft such as Panthers, Furys, Vigilantes, Skywarriors, Skyrays, Banshees, Demons and early Skyhawks. The cast detail is of the highest quality, notably the oxygen mask and parachute/ seat harnesses. 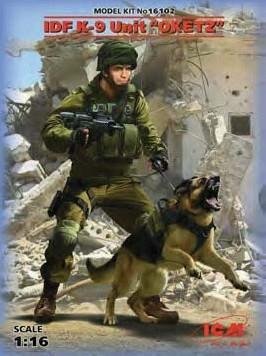 ICM surprised many with its recent IDF K-9 unit, as previously its largescale figures have been singletons. That said, the moulding is arguably the firm’s best to date, with notably refined detail on the dog’s mouth and the handler’s legs, boots and personal weapon. Everything is provided on two styrene runners, with a separate frame for the threepiece base. The comprehensive assembly/painting guide is supplemented by a colour A4 poster of the box-top artwork, and this will make an eye-catching display. Body armour and pistol harnesses are in styrene form, but those for the TAR-21 Assault Rifle and the canine companion must be scratch-built.

ON THE ROAD AGAIN 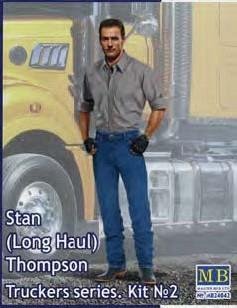 The second in Master Box’s Truckers range depicts a standing lorry driver. It comprises seven well-moulded styrene parts, with a two-part torso, and separate limbs and head, and this permits greater detail to be incorporated, notably the creases in the clothing. The level of refinement is more than adequate for the scale, notably the refined facial features, while there is a convincing ‘sit’ to the buttoned shirt and driving-gloveclad hands.

This would an excellent addition to any truck model or scene, either on its own or with other figures from this series.