Having released the US Marines’ F-4J as part of its new-tool 1/72 Phantom II range, the firm has reissued this sub-type with new US Navy markings. 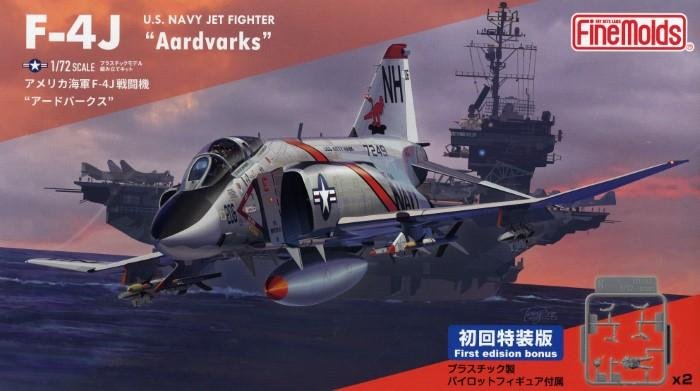 Phantom fans worldwide greeted Fine Molds’ new range of 1/72 F-4s with glee. They are arguably the best on the market in this scale, overtaking Hasegawa’s for refinement and accuracy.

For a review of Fine Molds’ F-4C Phantom, see here

It’s first F-4J provided three different US Marine Corps schemes, but now it has re-boxed the parts as kit FP43S, with decals for a trio of US Navy F-4J airframes, two being Vietnam War MiG killers.

Fine Molds Phantoms are splendidly detailed, and nothing has changed in that regard on this release. The kit offers the correct nuances of the F-4J, such as appropriately shaped inboard wing pylons (different to USAF versions, and likewise, longer standard LAU-7 missile rails are present, rather than the shorter air force items). Other airframe subtleties include fairings for the AN/APR-32 radar homing and warning antennas situated under the air intakes and nose, and on the upper-rear portion of the vertical tail.

Slotted stabilators are also provided, and in the cockpit, you have a choice of flat instrument panels with decal detail, or those with dials/switches moulded in situ. Raised features adorn the side consoles, and the rear ‘office’ has the correct vertical structure on the starboard side.

As with other F-4s in the range, it has wing and centreline fuel tanks, but no weapons… these must be sourced from Fine Molds’ own dedicated armament packs (FP44 US Aircraft Missile Set, and FP45 US Aircraft Bomb Set), other makers’ weapons sets or what you may have in your spares box.

The decal sheet is superb, and besides offering a full complement of stencils, warning markings and walkways, has décor for the following Phantoms:

All three aircraft wear the standard FS 16440 Light Gull Gray over white. A feature of this kit’s initial production run is that of bonus pilot figures, which are superbly detailed, each having two pairs of separate arms for different positioning. The individual heads have helmets and oxygen masks in place.

If you are a Phantom die-hard, but for whatever reason haven’t yet parted with cash for a Fine Molds Phantom, do try to do so. You’ll be rewarded with a splendid kit that builds well, and has a high degree of accuracy. This kit costs £39.99 and is available from Frome Model Centre: www.fromemodelcentre.com