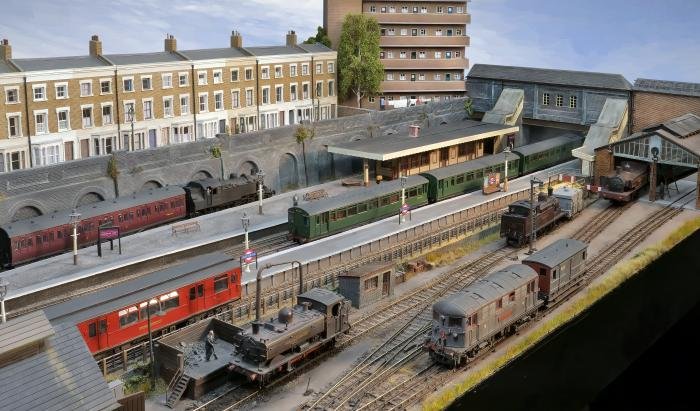 Rossiter Rise portrays a fictitious through station somewhere in the suburbs of North West London in the mid-late 1950s.

It includes platforms serving LMR suburban services, LMR branch line trains and a bay platform for London Underground shuttle services. In front of the station is a small LT depot.

Many of the structures are scratchbuilt, whilst others are kit built or modified propriety models. The majority of the rolling stock is not ready-to-run but a collection of unusual and rarely modelled items, including conversions, scratch-built and 3D printed construction.

As well as the services mentioned above, freight and light engine workings mean that almost anything can make a surprise appearance as motive power!

The layout is designed to be operated in such a way that trains are moving. Also, the layout is operated from the front and stock can be viewed ‘waiting in the wings’ in the off-scene storage yards at each end of the scenic section. The layout has been featured in Hornby Magazine and the London Underground Railway Society Magazine.