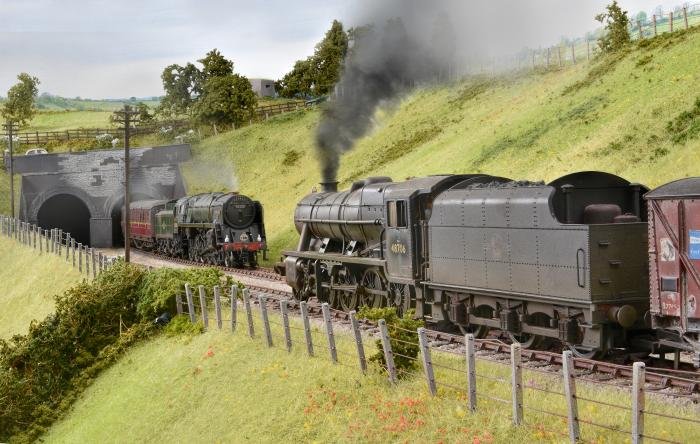 To some the 'Slow and Dirty' and to others the 'Serene and Delightful', the Somerset and Dorset Joint Railway (SDJR) has always attracted interest and debate amongst enthusiasts. The original inspiration for the layout was a photograph in the Somerset and Dorset in Colour book by Mike Arlett and David Lockett and the result is a 19ft long stretch of double track main line recreating the line as it exits Chilcompton Tunnel.

The trackplan is modest by most standards as the scenic section has no point work at all - just straightforward plain line laid using Peco's flexible bullhead rail track. However, it is the scenery around the railway and the stock itself which sets the scene as the layout includes the classic twin bore tunnel mouth from Chilcompton as well as the road underbridge shortly after.

All of the locomotives are ready-to-run items which have been detailed and weathered specifically for the model. All locomotives on the layout have at least been noted running along the SDJR and you can expect classic formations such as the 'Pines Express' headed by last built BR steam locomotive '9F' 92220 Evening Star, heavy freights in the hands of Stanier '8F' 2-8-0s and Fowler '7F' 2-8-0s, double-headed workings are more.

The full feature on Chilcompton Tunnel appeared in HM150 - the December 2019 issue - and you can also read that feature online here at KeyModelWorld.