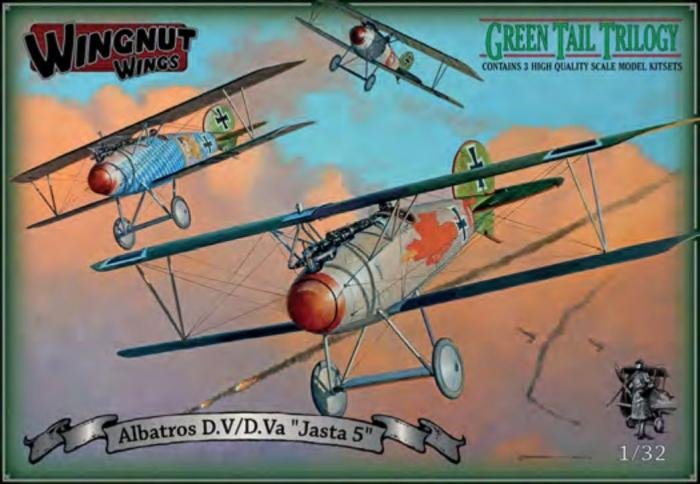 FANS OF large-scale World War One models will be delighted by the return of two classic Wingnut Wings’ 1/32 offerings, in the shape of its Fokker D.VII (Fok) and Albatros D.V/D.Va. The D.VII (32067) is the first to arrive, featuring identical parts to Wingnut’s 2012 iteration, but with markings for five early production aircraft, including those of Rudolf Berholt and Bruno Loerzer. Notable among the decals (supplied on four Cartograf-printed sheets) are those for the strié (stripey) camouflage, which was applied to the first 150 airframes.

However, it’s the Albatros Jasta 5 Green Tail Trilogy (32701) that brings the real fun, as it’s a triple-kit package, dedicated to this Royal Prussian squadron. Both D.V and D.Va variants can be built, and there are 11 spectacular schemes, with decals supplied on 12 sheets, including five-colour lozenge and a plethora of rib tapes.

This is likely to retail for approximately £180, but when one considers a basic Wingnut 1/32 aircraft costs in the region of £70-80, this represents good value for those with the budget. Both releases offer a range of options, such as engine types, cowlings, windscreens, radiators and propellers, and compared to other biplanes have minimal rigging, especially the D.VII. Further details, build hints and tips are at: www.wingnutwings.com