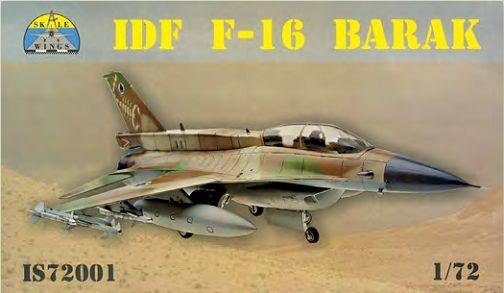 While there are plenty of 1/72 F-16 kits out there, its two-seat Barak (IS72001) is a notable addition to the styrene ‘Viper’ family. Comprising nine styrene runners (including one clear) and a small photo-etched (PE) metal fret, this is a well-detailed product. Exterior features are represented by engraved panel lines, and while generally quite fine, those on the fuselage spine halves are heavier, and would benefit from light sanding. Moulded relief is present on the cockpit instrument panels and side consoles, and the three-piece ACES II ejection seats receive PE straps and firing handles. Curiously, the exhaust nozzle is split horizontally, which may result in an awkward seam. Being limited-run in nature, parts will need minor preparation before assembly, but care at this stage will yield impressive results. A basic weapons fit is supplied, namely two underwing fuel tanks, and what appear to be LANTIRN targeting and navigation pods; two each of AIM-120, AIM-9 and Python 4 are also included…the latter are markedly superior to the other stores. There are three schemes (all in Israeli four-tone camouflage), from 105 Squadron ‘Scorpions’ at Hatzor Air Base in May 2005, featuring that unit’s distinctive sand-toned tail motif. Further details on Skale Wings’ products are available from its Facebook page.