Heljan has revealed that it will be producing the Mk 2/Mk 2a First Corridor (FK) coach as part of its new series of 'O' gauge passenger carriages. Release is expected in 2021 and prices have been set at £279.00 per coach. 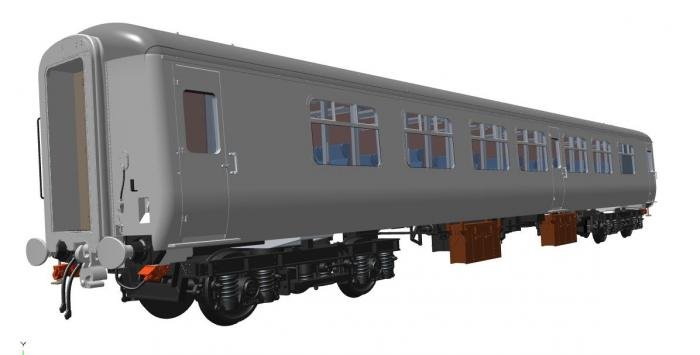 Above: CAD drawing for the newly added BR Mk 2 FK for 'O' gauge.

The FK joins the previously announced models of the Tourist Second Open (TSO), Brake Second Open (BSO) and Brake First Corridor (BFK) in late 2019 and will allow realistic Mk 2 formations to be recreated in 'O' gauge. Heljan has confirmed that design work is now complete on all vehicles and tooling is underway. The first samples are expected this autumn.

Highlights of the new Mk 2 carriages include interior and exterior detail, customer-fit underframe and gangway doors to allow models to be completed as vacuum-braked Mk 2 or air-braked Mk 2a vehicles and removable roofs secured with magnets. The removable roof also allows for installation of the separate battery powered lighting bars which are being developed by Heljan for sale separately.  These will feature a motion sensor to turn the lights on and Heljan says they will remain illuminated for two minutes when a train is stationary. The lightings bars will cost £29.99 per pack and are due to be released soon.

Above: Mk 2 TSO interior cutaway view from the final CAD drawings for the Heljan 'O' model.

Other features of the Mk 2 coaches include seats, luggage racks, tables and guards van detail on the interior and Heljan's new B4 bogies which will also be used on its next batch of Mk 1 stock for 'O' gauge. The livery range has also been amended, as detailed in the table below.