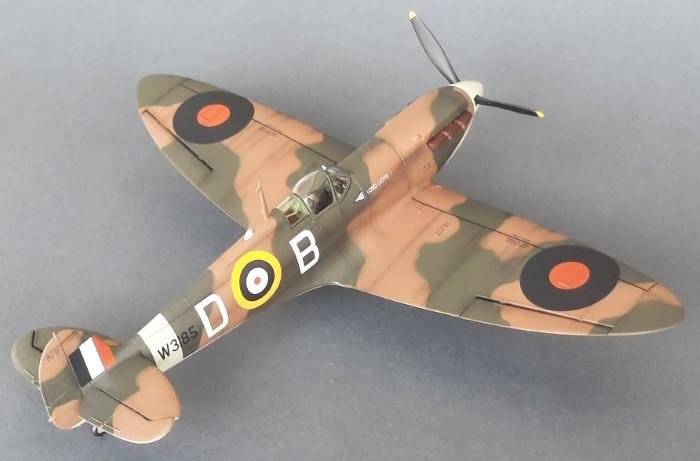 One of the few silver linings that came with the Covid-19 pandemic, among the many familiar stories of misfortunes and challenges, was that modellers had suddenly found more time for their hobby. Diehard builders gained extra hours not having to commute, while modellers who gave up kit-building long ago found themselves cooped up at home with the kids for months, looking for amusement. In many ways, this was a golden opportunity to finish those seemingly un loved ‘hangar queens’ that had stared at us for the last decade or more.

In Singapore, we experienced the same and with it came extra time on our hands. Many of us here belong to the aviation industry in one form or the other. With the slowdown of air travel, some were hit with a reduced work week and others were furloughed; at least during the initial stages of the pandemic. 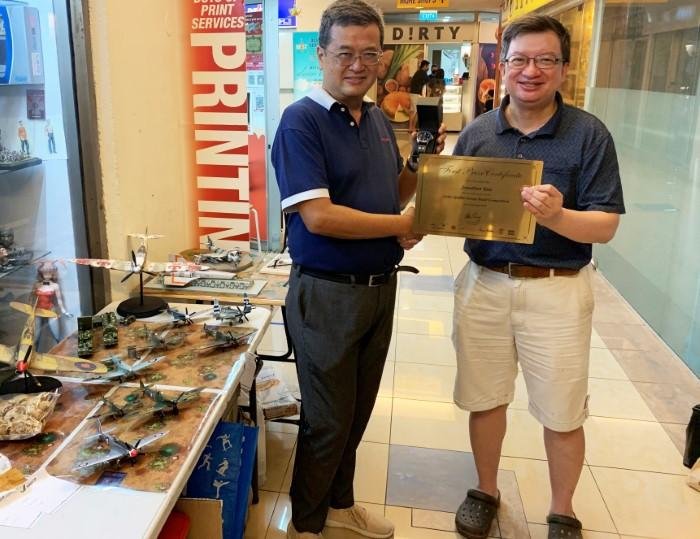 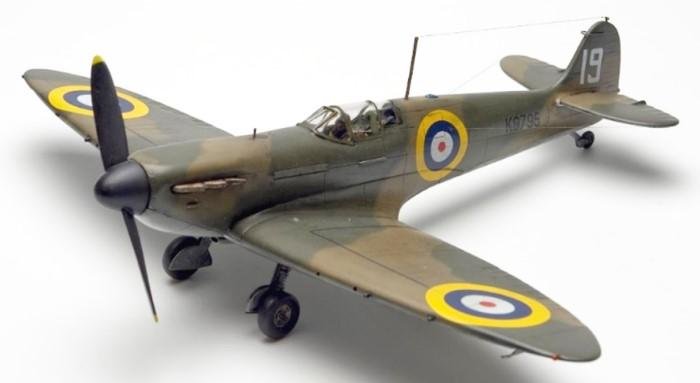 Above: Jonathan Kua's 1/48 Spitfire Mk.Ia, based on the Airfix kit from 2007. He added scratch-built detail, such as the rudder balance guide horn, fuel cap and tail antenna attachment point.

However, club modellers here kept our passion alive, transferring our beloved hobby from face-to-face weekly meets to remote gatherings/competitions, with photos of completed models being submitted for judging. Needless to say, we were forced to innovate quickly in the face of the uncertain scenario at the time.

In all, the group of about 30 members have held six competitions so far, on various themes. The weekly remote gathering through Skype had continued without missing a single session for 25 months. One of the unexpected advantages of having remote competitions and meetings is that there is no geographical restriction. For every event, we have had participants and judges from the UK, Australia, Kuwait and other various parts of the world… thanks to advanced yet affordable IT technology. The events were therapeutic for some and just good fun to the rest; certainly, it kept the group together, and attracted a few more international members. Collectively it has become known as ‘The Usual Suspects’. 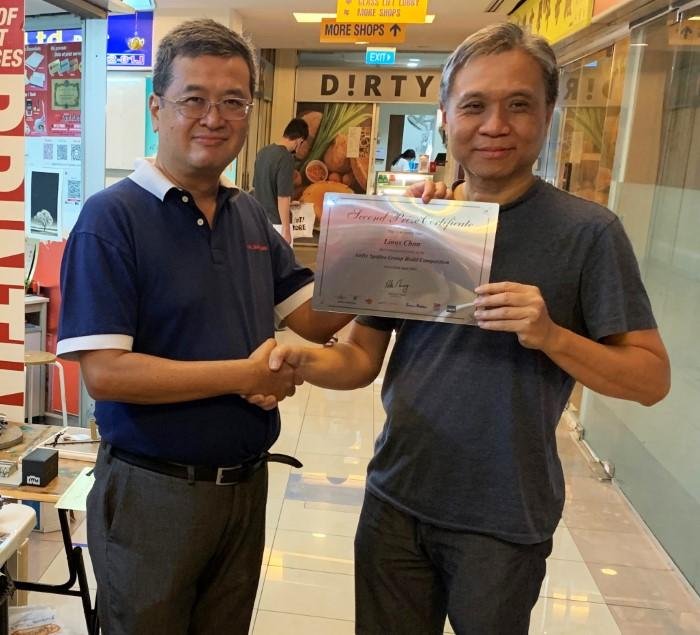 Above: Linus Chan (right) was the second-placed modeller, for his efforts with his 1/48 Spitfire Mk.Va named ‘Dogsbody’, depicting Douglas Bader’s aircraft W3185/D-B.

The latest and more audacious competition was a Spitfire group build conducted in April 2022. Singapore is not short of self-professed Spitfire experts, making the event that much more interesting. Participants were given three weeks to complete their iconic Airfix Spitfires and Seafires, judges being nominated from within the group. No restriction was placed on the period, and participants had the artistic and technical freedom to modify and add aftermarket as they wished. The judges were Tony James, Mick Stephen, Kevin Khoo and Peter Chiang. 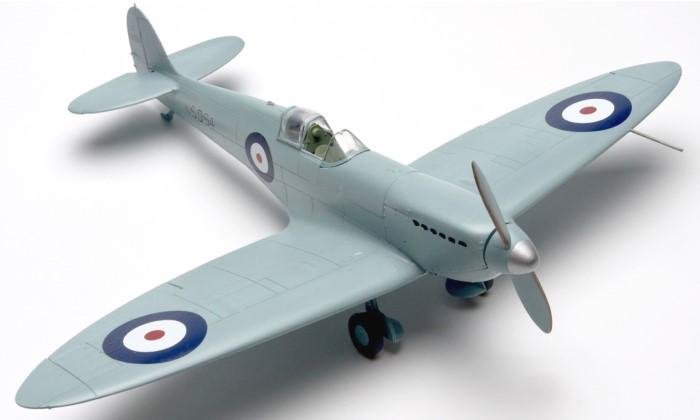 Above and below: Kevin Luo (left) gained third place with his excellent Spitfire prototype K5054, based on Airfix’s 1/48 new-tool Mk.Ia but heavily modified. The build involved re-scribing, filling the gun and shell ejector ports, scratch-building new exhausts, and hand-drawing stencils for the serials. 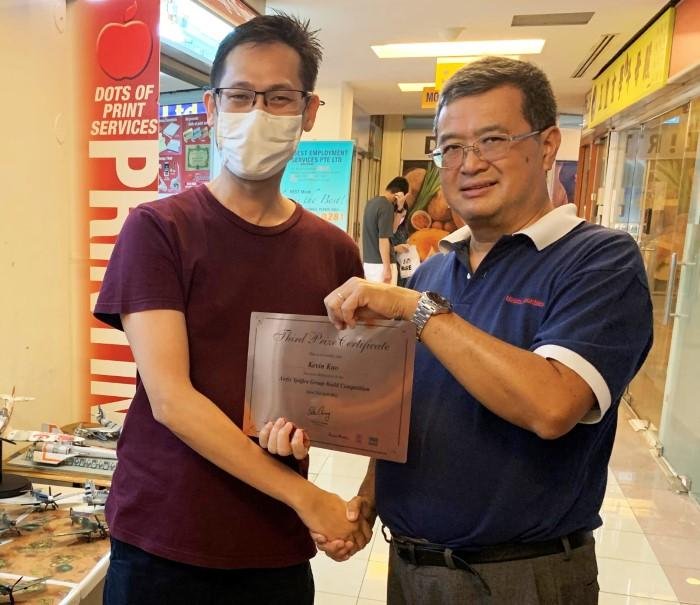 At closing, there were 13 entries and 15 aircraft on display (one addition from the organiser and the other from previous build). Scales ranged from 1/72 to 1/24 and kit production era was from vintage to the newest of toolings.
During the three weeks of competition, on weekends, remote Skype calls were made with all participants together… also incorporating ongoing WhatsApp commentaries with photos of various stages of construction. These activities made the group build feel more like a Jamboree than a competition. To add to the fun and share interesting information, participants were invited to participate in Spitfire trivia, to ask or to answer. Interesting facts were shared, and even more hilarious answers received. 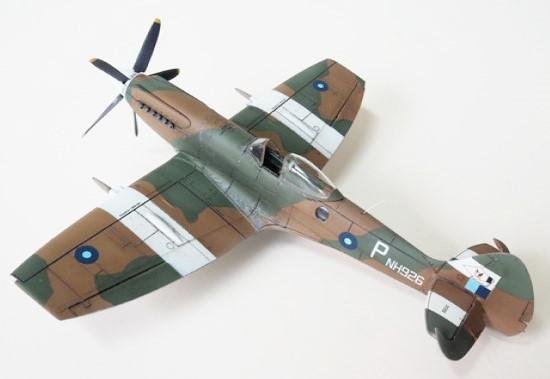 Above: There were many other Spitfire builds outside of the top three, including this 1/48 FR.XIVe by Koh Tse Hsien. It was completed out of the box, apart from photo-etched metal seatbelts and aftermarket markings from Xtradecal.

Trivia included questions such as, why additional Perspex panels were installed on early Spitfire canopies, how many types of propellers were on Spitfires/ Seafires, wing types, Frise ailerons, Spitfire Knuckles etc. The challenge was to find questions that were not easily found through Google; which proved to be difficult and ‘keyboard champions’ always had the advantage. 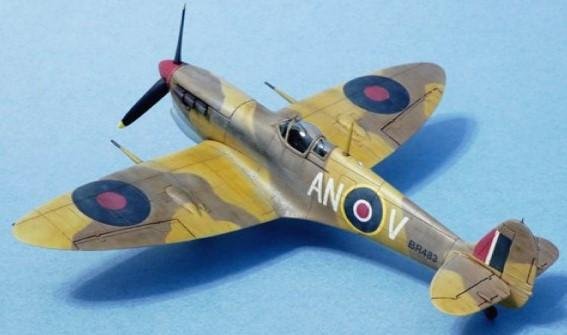 Above: John Wong’s 1/72 Spitfire Mk.Vb was an attractive entry, the model being built from Airfix’s vintage 1970s kit, and emulating the Royal Canadian Air Force machine BR483/AN-V, based in Tunisia during 1943.

In the tradition of the retailer Hobby Bounties’ model competition, realism and engineering accuracy were important components of the finished model. This was over and above the artistic rendering when it came to painting, aftermarket additions, weathering and the like. Propeller pitch, flight control surface positions and landing gear angles were all critical to make a realistic model. ‘Gutsiness’ was another important aspect of scoring. Putting it all together, entries are scored more for ‘Adventurous Realism’ rather than on artistic prowess. In that spirit, we have a few extraordinary entries, namely a Type 300 prototype, K5054, modified from a Airfix Spitfire Mk.1a; the same modeller also finished a Seafire FR.47, completing his objective of building the First and the Last, leaving the rest of us to fill in between. 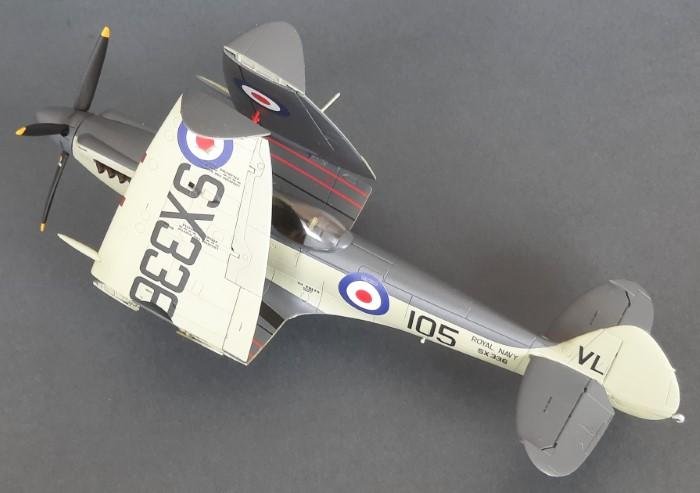 Above: This very smart 1/48 Seafire F XVII by Linus Chan was much admired by fellow club members. It emulates SX336, restored in the UK by Kennet Aviation and now in the care of the Navy Wings Heritage Centre at Yeovilton.

In conclusion, the mini group build had achieved its intended objectives and superseded expectations; particularly on an iconic subject that is so popular and so ably researched. More importantly, all had fun participating, albeit remotely. For years, the mantra has been that modelling teaches many skills, including patience, systematic problem-solving, understand drawings/plans, and thinking three-dimensionally. This competition, however, highlighted seldom-mentioned ideals; keeping our sanity during times of uncertainty, relieving stress triggered by matters beyond our control, and keeping in touch with friends through a hobby that can be as affordable or as expensive we want it to be. Ultimately, it’s a fun and enjoyable hobby that produces completed models that are special in their own way, no two being the same; something to be called our own. 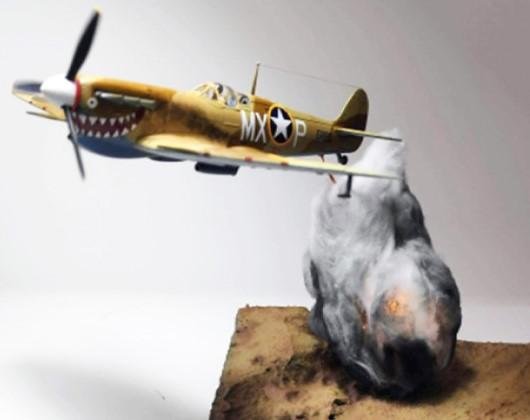 Above: Paul Gallagher chose an ingenious method of display for his 1/72 new-tool Mk.Vc in desert scheme, which is a still a project in progress. The base is still to be enlivened with 1/144 vehicles for forced perspective. 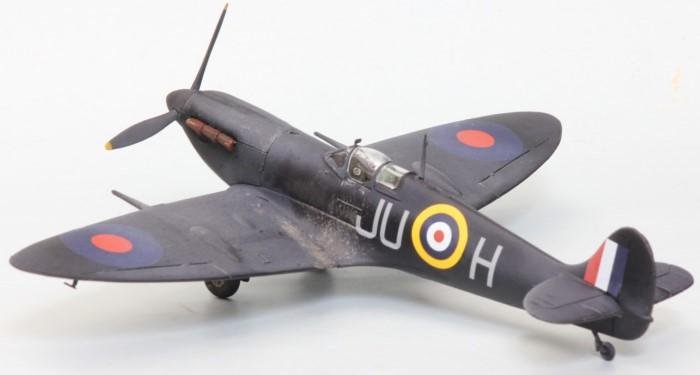 Above: Terrence Teo chose an RAF nocturnal livery for his 1/48 Spitfire Mk.Vb, which exhibited real depth of finish.