Accurascale has unveiled plans for its next ‘OO’ gauge model - the HYA/IIA bogie hopper wagon.

Around 400 examples of these high-capacity hopper wagons were built in batches between 2007 and 2011. Originally developed for GB Railfreight (GBRf), they were intended for use on coal trains although many are today dedicated to aggregates traffic, while some have either been converted for Biomass use or shortened in length. A batch was also built for now defunct Fastline Freight, which subsequently passed to other operators in recent years including Colas and Freightliner.

Accurascale’s new ‘OO’ gauge model is well-advanced with first Engineering Prototype (EP) samples arriving with the manufacturer’s development team for evaluation earlier in the year. Working closely with manufacturer WH Davis, improvements to the fit and finish of the wagons have been highlighted and revisions will be made ahead of decorated samples arriving during September. The specification includes sprung buffers, air pipes, separately fitted brake hand-wheel, levers, hopper operating brackets, TP25 low track force bogies, brake blocks in line with wheels, etched metal detailing and more. A working tail lamp will also be included with one GBRf and one Fastline Freight wagon for added realism. 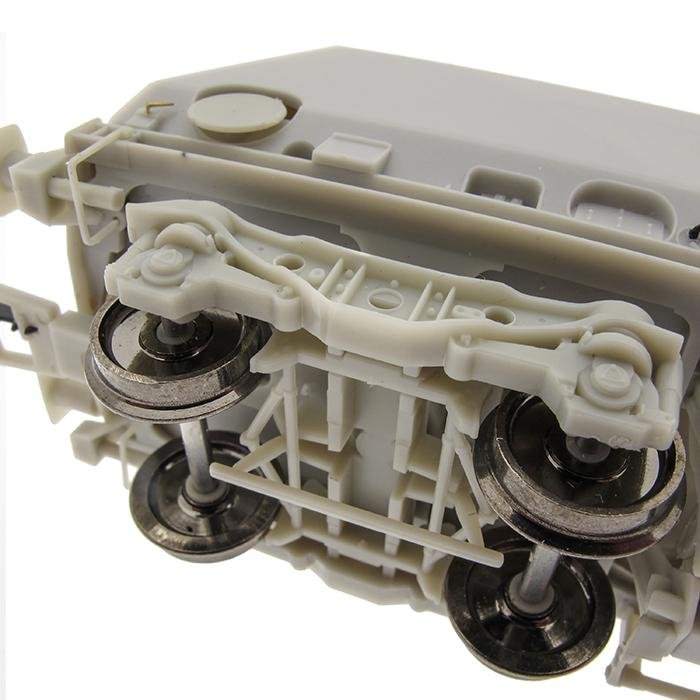 Priced at £74.95 per twin pack, bundle deals for the GBRf and Fastline Freight examples are also available at the discounted price of £210, while all wagons can be obtained for £469.20. Delivery is scheduled during the second quarter of 2021.