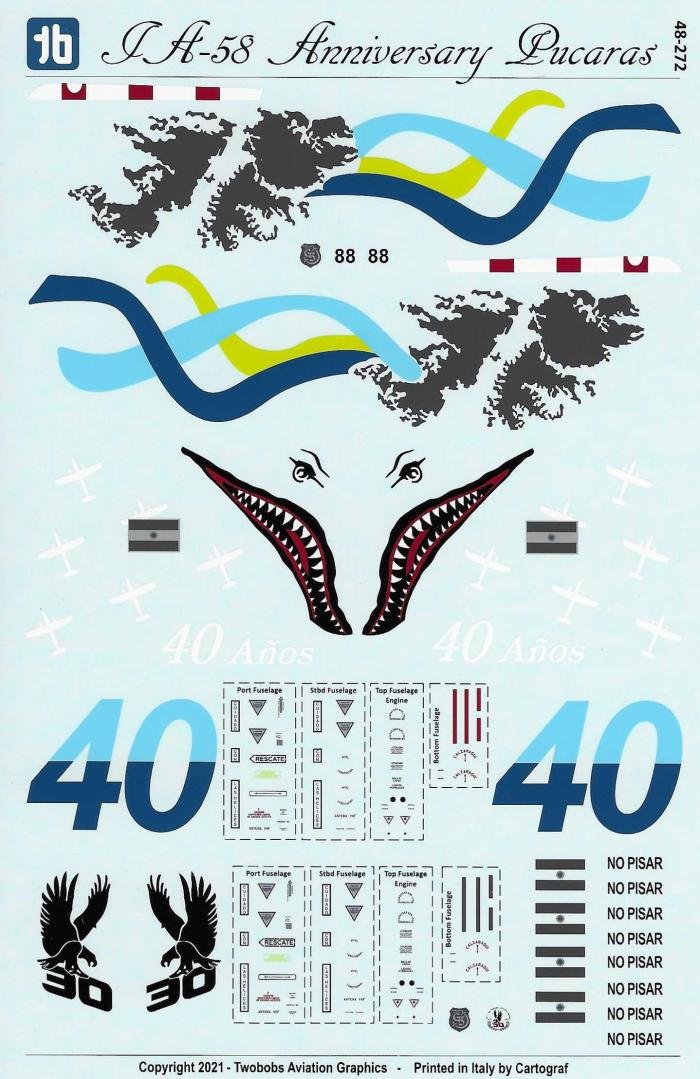 Forever associated with its role in the Falklands conflict of 1982, the FMA Pucará is a fascinating and capable counter-insurgency aircraft, which still serves and is continually being upgraded. Bizarrely, though, it took until earlier this year for the first injection-moulded 1/48 styrene kit of the type to reach the market, via manufacturer Kinetic (see News, in Airfix Model World May 2021 issue). In case you’re wondering, the aircraft’s name is that of an Inca stone hill fort, following the FMA’s tradition in using South American Indian monikers for its products.

Two Bobs is quick off the mark with three special liveries on its new decal sheet, and the airframes are all painted to mark the 30th and 40th anniversaries of the invasion of the ‘Malvinas’... the Argentinian name for the Falkland Islands. One 30th and a 40th anniversary Pucará wear overall FS 36495 Light Gray, but the other bucks that trend by having an FS 15102 Dark Blue tail with white Pucará planforms and ‘40 Anos’ legends. The two machines marking 40 years also have a Falkland Islands outline on the fuselage, with trailing colour bands of pale and dark blue, and yellow. Conversely, the overall Light Gray aircraft has a simple black bird of prey and ‘30’ motif on the tail.

The decals themselves are to Two Bobs’ usual excellent standard, with gloss carrier film and sharp printing by Cartograf of Italy. For further details visit: www.twobobs.net