FOR THE LOVE OF TRAINS

Hornby Magazine’s photographer TREVOR JONES explains how he became interested in railways following a visit to Manchester in the late 1940s.

MY LOVE OF TRAINS started in the late 1940s when my grandad used to take me out shopping in Manchester. We usually visited Woolworths, but on one occasion we called into Piccadilly station and were invited on the footplate of a steam locomotive. The driver lifted me up to pull the whistle, what a noise for a three or four-year-old!

My second thrill was at a foot crossing near Pendlebury when a red engine on a matching rake of coaches stormed past. These two events were the start of my lifelong love of trains and particularly steam locomotives. It was Christmas 1949 that I started my abiding interest in model trains when I received a Hornby Dublo train set featuring Gresley ‘A4’ 4-6-2 No.7 Sir Nigel Gresley in LNER garter blue with maroon wheels.

We moved to London in 1950 and eventually the Hornby set developed into a permanent layout in my bedroom. My interest in train spotting slowly developed and after becoming mobile, with a three-speed Hercules bike when I was 12, most Saturdays were spent alongside a railway line or engine shed. My early adventures were mainly on the nearby Southern Region. 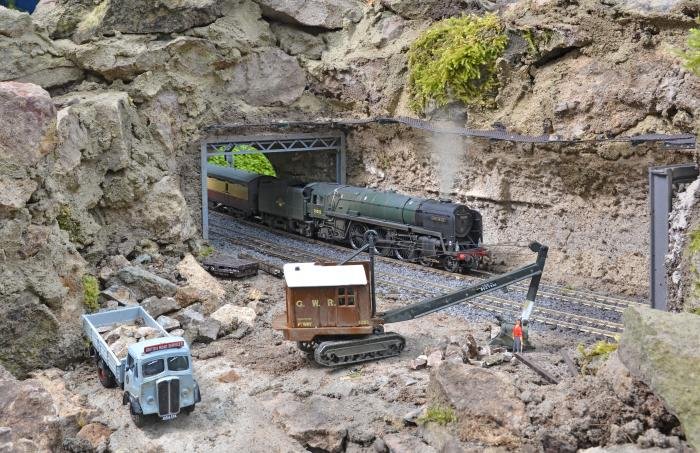 Above: Trevor’s ‘OO’ gauge garden railway is a stunning example of model railways outdoors. It features in Hornby Magazine Yearbook No. 12 – on sale now from the Key Publishing Shop.

With newly found enthusiasts at my grammar school, a trip to Hornsey on the Great Northern Main Line was arranged and from the footbridge there my love for Gresley’s streamlined ‘A4s’ was set for life. The distant sound of the chime whistle, then smoke as the locomotive passed Harringay, and finally the ‘streak’ appearing in the distance with the sun glinting off the streamlined casing making it look silver. A few seconds later it tore through the station at 60mph working hard as it headed north from the capital. This memory has stayed with me throughout my life and is relived every time an ‘A4’ is seen, either real or as a model.

In my late teens model railways went down in my interests and it was in the 1970s that my passion for miniature trains was rekindled. The introduction by Mainline of its LNER ‘J72’ 0-6-0T (HM149) and its private owner wagon range were catalysts together with the Trix/ Liliput ‘A4’ which set new standards for ready-to-run products at that time. These were soon followed by Airfix entering the market. Wanting to run a greater range of locomotives I started building kits, firstly a Wills SECR ‘P’ 0-6-0T followed by a K’s LNER ‘P2’ 2-8-2 - both are still running today on my garden railway, but with new mechanisms.

In 1979 we moved to Buckinghamshire and a year later I laid out the first outdoor railway line which led to creation of the garden railway that I have today. It fulfils my dream of watching trains go by, just as I had loved to do with the real thing in my youth.

Over the years it has developed into a more complex and impressive layout which has become the standard to aim for in ‘OO’ garden layouts. The full circuit is more than 150ft long and it occupies more than 80ft from the length of my garden. The railway is fully bedded in to its surroundings with the final phase being development of the station area at Flackwell Heath. You can read more about my garden railway in the Hornby Magazine Yearbook – on sale from November 21 2019.

My life as a professional photographer has led me to combining my model railway hobby with photography and for 11 years it has given me the opportunity of seeing many marvellous layouts on my photographic assignments for Hornby Magazine. Through the magazine I’ve visited all parts of the UK to photograph model railways and met many fantastic modellers along the way and I look forward to seeing more new layouts in the years to come.