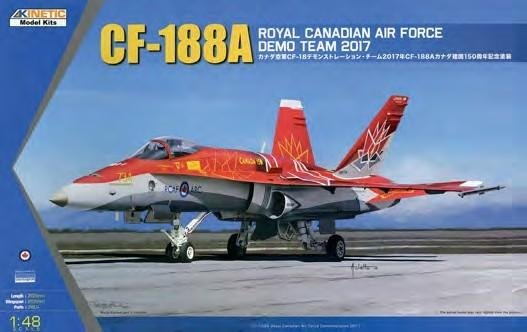 CANADA HAS applied colourful special schemes to some of its CF-188 Hornets, but this year’s display jet is arguably the most eye-popping.

Kinetic has put much thought into the decals for this complex livery, offering not just waterslide markings, but also the option to use the templates provided in painting the white portion of the aircraft. Decal quality and printing is superb.

Styrene-wise, there is much to love about this kit (see Chris Jones’ build of the first boxing in our August 2017 issue), although note that the copious weaponry given previously does not appear in this latest package, due to the jet’s ‘clean’ display format. The photoetched brass detail parts remain, however. For further details, visit: www.kineticmodel.com