Arguably one of the best Schnellboot (also known as S-Boot and E-Boat) kits available, Revell’s S-100 is also great value, with six styrene runners, separate hull halves, a splendid decal sheet, rigging thread and a pre-printed acetate sheet for the bridge glazing. While most parts are well moulded, smaller items suffer from flash, notably the prop-shaft mounts and crew ladders, although these should be easy to neaten. There’s plenty to savour, from the accurate anti-aircraft guns to the well-appointed armoured bridge interior and spare torpedo rails (two reload munitions are supplied). While there are no crew figures, these are available from aftermarket companies, as are photo-etched and turned brass extras for those demanding further refinement. Markings are provided for four vessels, two without hull numbers (although one of these – possibly S-204 – has jaguar artwork on the bridge sides), and the remaining pair are S-68 and S-206. All are clad in standard Schnellbootweiss, with black lower hulls and Dunkelgrau decks. 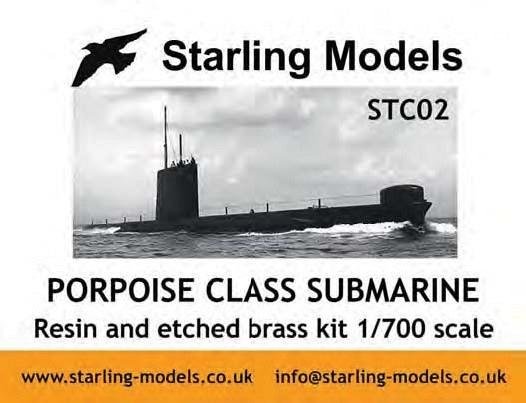 The second release in Starling’s ‘Craftsman’ line is a British Porpoise-class diesel-powered submarine, as used by the Royal Navy between the 1960s and 1980s. With just four parts, this is a quick and simple subject, with a single piece resin waterline hull and conning tower, plus a small photo-etched (PE) brass fret for the diving planes and anchor. The casting is excellent, with the upper casing featuring fine recessed detail, along with flooding holes on the sides. Openings in the conning tower provide locations for periscopes and masts, and there is an aperture in the port hull for a PE anchor. No painting guide or decals are included, but helpfully, two references are provided to aid modellers. 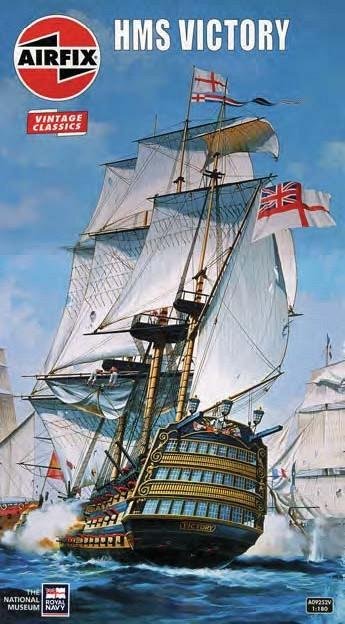 Airfix’s HMS Victory is history personified. The original kit is more than 50 years old, yet the parts are comparatively well moulded, although smaller pieces suffer from flash. All the styrene parts remain unchanged from the first release, with the sails represented as vac-formed items (these will need cutting from the surrounding sheet before use), while the deadeyes are supplied in blocks, to ease construction. The big difference is the rigging; gone are the pre-formed ‘sheets’ of shrouds, instead there’s an ingenious two-piece jig, two thicknesses of thread and a double page devoted to their use. Ensigns, standards and signalling flags are supplied as self-adhesive stickers, and the latter items are intended to replicate Admiral Nelson’s famous Battle of Trafalgar “England expects that every man will do his duty” message, although at least one has an incorrect pattern, and the blue sections are too pale when compared to references.

FROM PLATE TO JAVA

Aoshima’s third boxing of HMS Exeter depicts the vessel as it appeared after its post-Battle of the River Plate refit in late 1941, with improved secondary and antiaircraft armament, and replaced the pole-style masts with tripod units. It comprises nine styrene runners, all packed with beautifully moulded parts, notably the single piece catapults and crane jib, while the separate waterline hull features integral life rafts and recessed portholes. This is by far the most accurate and refined offering of a York-class heavy cruiser in the scale, and boasts a staggering level of detail, from the multi-part octuple ‘pom-pom’ mounts to the delicate engraved decking and anchor chains. Experience modellers may wish to add photo-etched fittings, but it will build into a convincing replica straight from the box and would make a great subject for those new to maritime subjects. Neat touches include open bridge windows and the searchlights – supplied as transparent items.