Italeri has steadily been re-releasing 1980s ESCI kits in recent years. Now it’s the turn of the 1/72 F-8E Crusader, as CHRIS CLIFFORD explains. 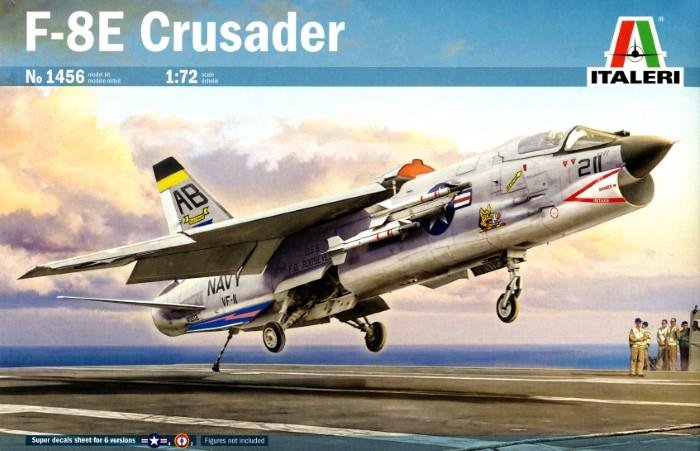 For much of the 1980s, Italy’s ESCI was the go-to manufacturer for 1/72 fast jets, along with Hasegawa. Kits such as the A-7D/E, Sea Harrier FRS.1, F-100 and F-4 Phantoms were highly regarded for their engraved panel lines and overall decent shape, despite the detail being a little sparse here and there. The firm’s 1988 F-8E Crusader was a popular item at the time, and it’s now made its way into an Italeri box for a re-release, with a spanking new (and busy) decal sheet. 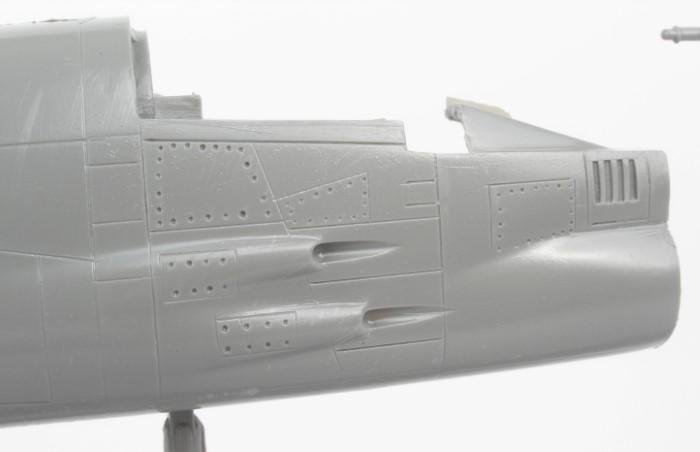 Above: ESCI was one of the first aircraft kit manufacturers to provide engraved panel lines, and they still stand up well today. 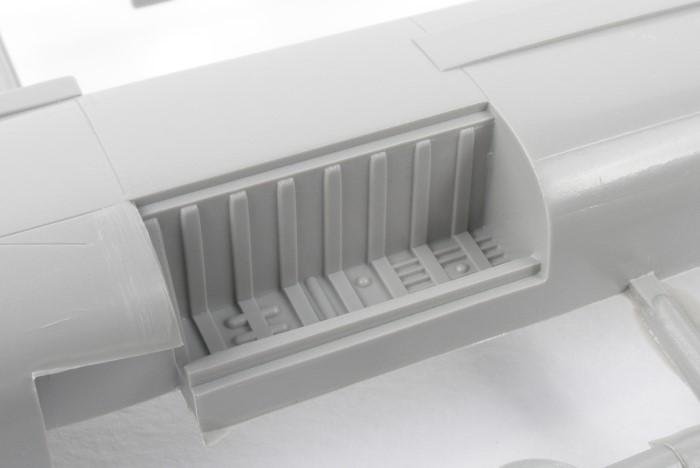 Above: While not strictly accurate, the undercarriage bay detail makes these areas livelier.

Let’s make no bones about it, the F-8, known as the MiG Master for its air combat prowess in the Vietnam War, has already been kitted by Academy in 1/72, and that company’s effort is the ‘gold standard’ in this scale. It can be purchased for roughly the same price as Italeri’s (£19.99), so you’d be forgiven for considering the latter kit somewhat redundant. That would be harsh, as it still stands up reasonably well and has the bonus of the large new (and well-printed) decal sheet, providing a generous six colour scheme options. It can also be quickly improved with better weapons that many modellers have lurking in the spares box.

On studying the fuselage halves, you’ll find delicate engraving and recessed rivet lines, deftly moulded vents under the windscreen, and detailed undercarriage bays. The cockpit is reasonable at best, with integral side consoles, an odd-looking control column and a basic ejection seat. Popping in an aftermarket Martin-Baker Mk.5 seat would be a cheap and easy upgrade. No moulded instrumentation is present – just decals for the panel and consoles, which would be adequate if having the canopy closed.

Above: The undercarriage legs are fair replicas, but sturdy. 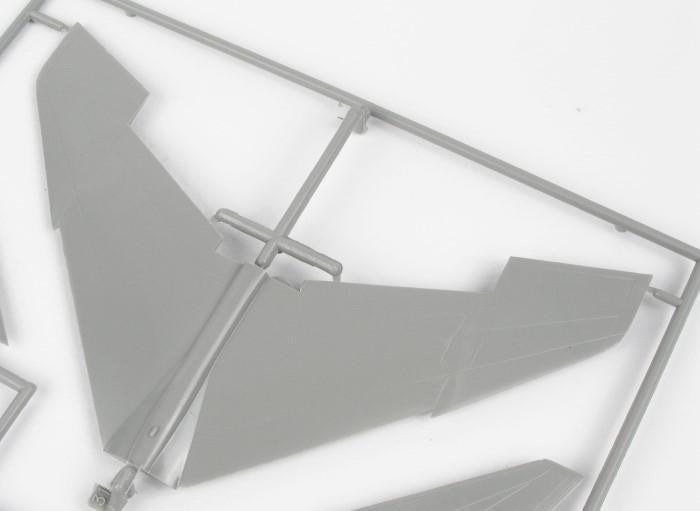 Above: As with most F-8 kits, you can pose the variable-incidence wing open or closed, and separate flaps are provided.

On the bonus side, there are separate flaps, and the type’s famous variable-incidence wing can be posed level or raised. An afterburner flame holder is offered, this fitting to the rear exhaust section, and the undercarriage legs are fair in terms of detail. Other features include the correct bulged spine (which incorporated electronics to work in concert with Bullpup missiles), the infrared sensor on top of the nose, and the E’s larger radome.

Above: The wheel hubs are passable, but you could always use better aftermarket options. 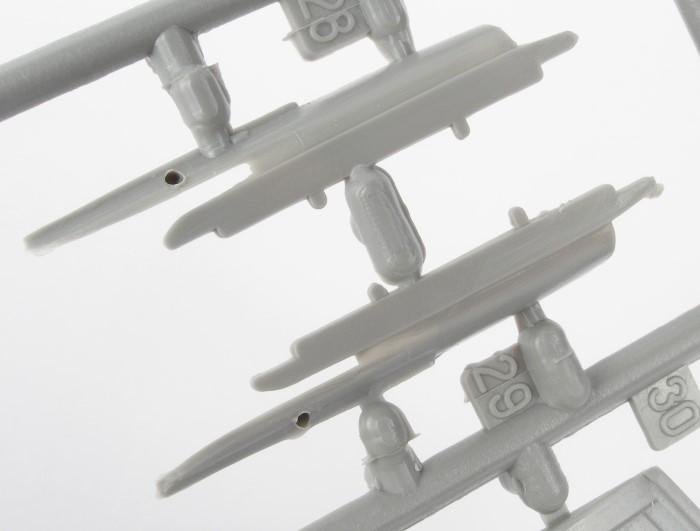 Above: Dual missile rails for AIM-9s are present, as seen here, as well as single equivalents.

The kit does fall down in its weaponry, which is slightly clunky; there are six Mk.82 Snakeye retard-tail bombs, two triple ejector racks, AIM-9B Sidewinder and Matra Magic missiles. The latter are particularly poor, with incorrectly-shaped forward fins. There is the choice of single or dual AIM-9 rails for the US variants. 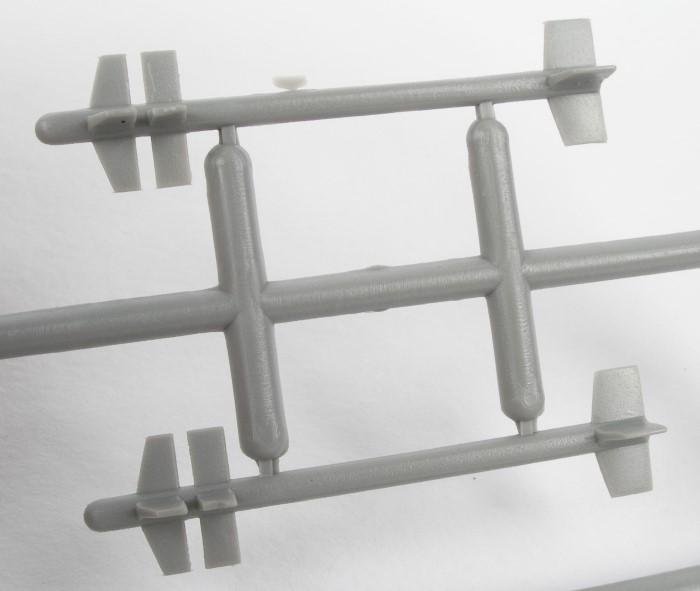 Above: You’re best removing the forward fins from these Matra Magic missiles if building either of the French aircraft, and making more accurate replacements with plastic card. Or, remove the forward fins altogether and cut down the rear fins, to create practice rounds. 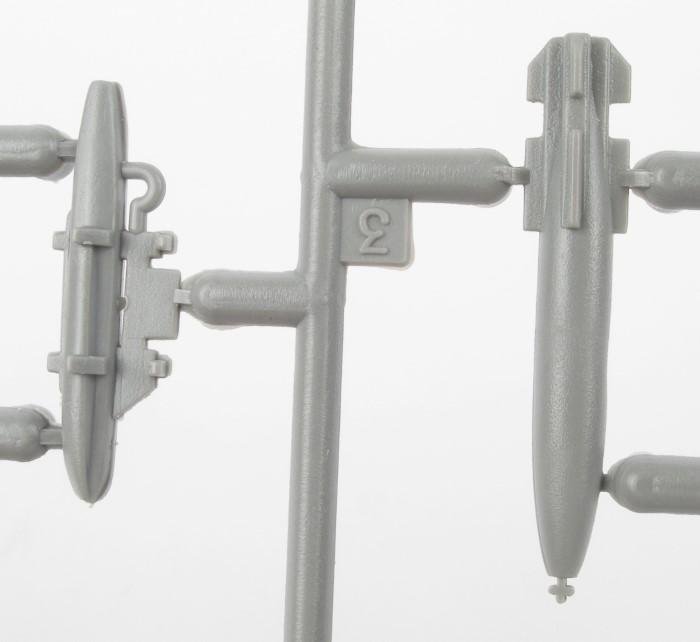 Above: Mk.82 Snakeye bombs and triple ejector racks are provided. If you want more refinement, better examples of both can be found in Hasegawa's Aircraft Weapons I: US Bombs & Rocket Launchers

As mentioned, the winning inclusion is the busy and richly-coloured decal sheet which, besides the US Navy/Marines liveries, provides markings for the older and late-service camouflage on French Aéronavale F-8E(FN)s. The liveries are:

The US Navy/Marines jets are all in the standard Light Gull Gray over white, as is the earlier-scheme French example, but the other Aéronavale machine is in overall Intermediate Blue. 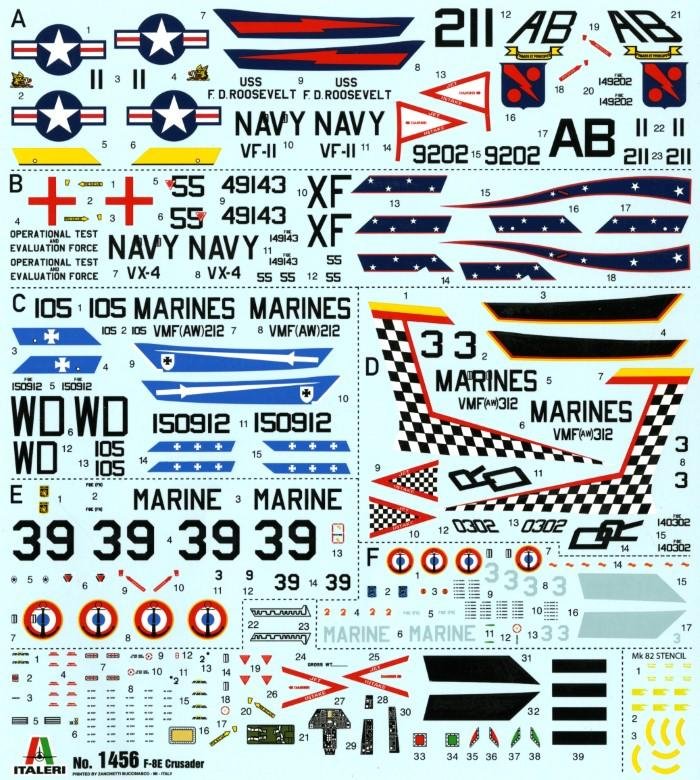 If you want the best detail and build quality, Academy’s kit is the winner, but if you can’t locate one  ̶  and/or the choice of colour schemes with Italeri’s boxing is more appealing, it won’t take too much extra work to make the latter look pleasing. A little scratch-built embellishment in places will work wonders, and the engraved panel lines make the kit look more modern than it is. Build it for nostalgia, or just for the sheer heck of it… either way it’ll be fun!

Italeri kits are available in the UK via The Hobby Company: www.hobbyco.net