Preparations are well in hand at the Newark Air Museum for the Falklands 40th & Cold War Call Up event, which takes place on Saturday 30th April and Sunday 1st May, 2022. 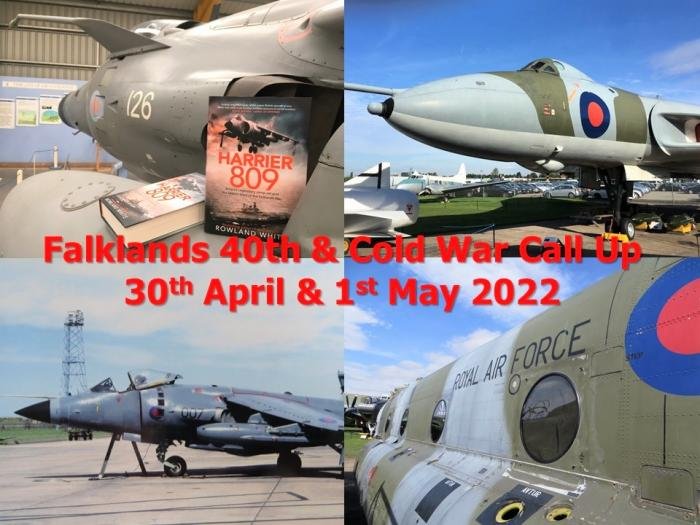 This two-day event has been organised to tie in with the commemoration of the 40th Anniversary of the successful Black Buck 1 Vulcan bombing raid on the runway at Port Stanley Airport in the Falkland Islands. The raid was co-ordinated by the Vulcan Wing at nearby RAF Waddington, Lincolnshire; in conjunction with the Victor Tanker Wing at RAF Marham, Norfolk and launched from Ascension Island on April 30th, 1982.

The museum's Sea Harrier ZA176, which flew Combat Air Patrols from HMS Hermes during the successful campaign to liberate the Falkland Islands. This aircraft will form a central element of the event, which will be supported by a host of visiting displays and exhibits dispersed around the 16-acre site.

On Saturday 30th April, an RAF Explosive Ordnance Disposal (EOD) Memorial will be dedicated in the Museum Memorial Garden at 11:00 hours, in a short service led by Rev Alan Boyd. This will be followed by the official unveiling of the new RAF EOD Display in Hangar 2. On Saturday afternoon and throughout the day on Sunday, Sqn Ldr Mick Haygarth will also host various Question & Answer sessions about his time in the RAF and with various RAF EOD units; he will also be available to sell and sign copies of his book From The Cold War To The War On Terror.

Another aspect of the displays will aim to remind visitors of the tremendous role undertaken by many aircraft and aircrews during the Cold War Era and helped maintain a relatively peaceful situation in Europe for many years. Plus, we will be hosting an Outdoor Aeroboot aviation sale on the Southfield Site.

For members of the general public normal museum admission rates apply and full listing details about the events can be found on the Museum Events page of the museum website at www.newarkairmuseum.org - the address is below and admission prices are as follows:  Adults £10.00, Over 65s £10.00, Children £5.00 and Family ticket [2 adults & 3 children] £27.00. Appointments are preferred for Group [15 plus people] visits, although not essential and a party rate booking information pack is available on application.