‘OO’ IIA biomass wagons are next for Accurascale

‘OO’ IIA biomass wagons
are next for Accurascale

ACCURASCALE has unveiled plans to produce the GB Railfreight (GBRf) IIA Biomass hopper wagon for ‘OO’. This latest announcement follows plans to produce the HYA bogie hopper wagons (HM160), from which the IIA was developed for GBRf. More than 100 wagons were built or converted by WH Davis between 2009 and 2013 for use with GBRf’s biomass traffic. Amongst the changes were a pair of long pneumatically operated roof doors to keep the payload dry during shipment to power stations. 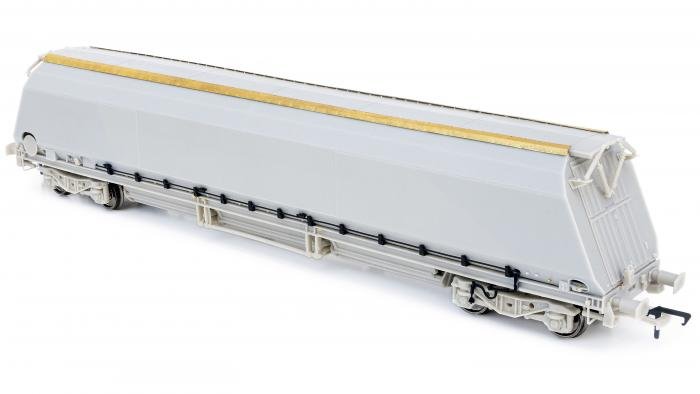 Currently at the first Engineering Prototype (EP) sample stage, the new model incorporates the new doors along the roofline, revised end plates, master controls, equipment boxes and more. These wagons have carried two variants of GBRf livery – one with First/GBRf and VTG branding and the other with just VTG and GBRf branding – and Accurascale will be offering examples in both schemes, supplied in four twin-packs containing eight individually numbered IIA wagons in total. One twin-pack will include a hopper with factory-fitted illuminated flashing tail lamp, supplied with a telescopic magnet wand to turn the light on and off.

Prices are set at £74.95 per twinpack, while a bundle deal for all eight wagons is priced at £269.95. Delivery is currently anticipated during the second quarter of 2021.