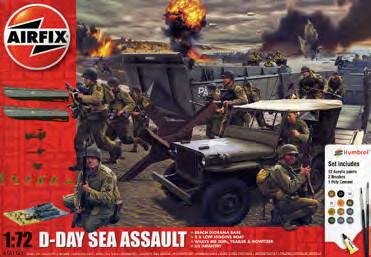 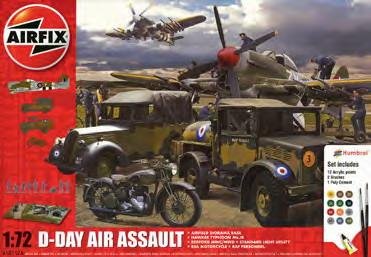 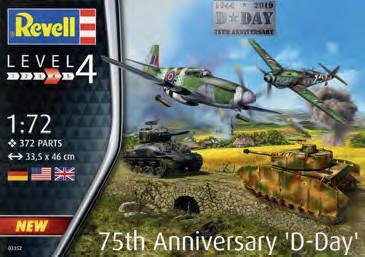 BOXSETS FROM both Airfix and Revell have been released to commemorate the 75th anniversary of the D-Day landings in Normandy, France – combining 1/72 kits with vac-form diorama bases to create instant vignettes. Airfix has recreated the multifaceted operation with two packages; one depicting the amphibious element and the other a representation of equipment used for aerial assault. The D-Day Sea Assault set (A50156A) combines two LCVP Higgins boats, US Infantry figures, a US Army Willys Jeep with trailer and 75mm Pack M1 howitzer with a 13 x 9in (340 x 240mm) base. This last item provides a section of beach and the sea lapping at the shore, with tyre tracks and indentations to position the jeep and boats respectively. Similarly, the base in the D-Day Air Assault package (A50157A) represents a section of temporary airfield surrounded by a raised embankment on three sides and a road segment beyond this. The firm’s recent Hawker Typhoon Mk.Ib appears as a 247 Squadron machine, and can be posed alongside a Standard ‘Tilly’ Light Utility vehicle, BSA M20 motorcycle and either a Bedford MWC Water Carrier or MWD Light Truck, plus 37 RAF Personnel figures. Both Airfix packs also provide 12 acrylic paints, a tube of polystyrene cement and two paintbrushes, and are priced at £29.99 each – significantly cheaper than buying the kits individually. For further details, visit: www.airfix.com Revell’s commemorative set (03352) incorporates both ground-based and aerial combat between Allied and Axis forces – in the form of a Panzer IV and M4 Sherman plus a Messerschmitt Bf 109G-10 and an RAF Mustang Mk.III. The tanks can be positioned on either side of a bridge on the 18 x 13in (460 x 335mm) base, while separate display stands are provided for each aircraft – the instructions demonstrate combining these with the diorama support. The set costs £49.99, and more information is available at: www.revell.de/en