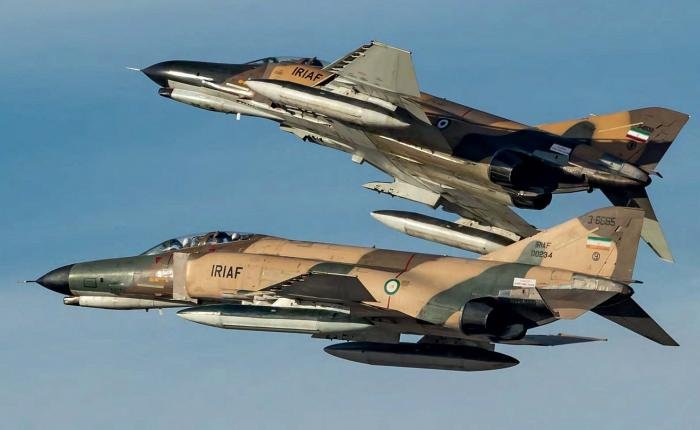 Iran is one of the few remaining nations to operate F-4E Phantoms, two of which are seen here performing a formation break. The upper airframe, 3-6535, is a standard airframe, while the second, 3-6665 has a TISEO electro-optical sight fitted to its port wing leading edge.

First held in 2002, it occurs biennially and has grown with each show; last year more than 115 domestic and foreign civil and military aviation/aerospace exhibitors participated. Flying occurred between 2pm-4.30pm each day, and the first day’s activity was attended by highranking Iranian and foreign officials. Among the most eagerly anticipated static (and flying) displays were the F-14 Tomcat, and EMB-312 Tucano, indigenous F-5- derived twin-tailed HESA Saeqeh (Thunderbolt), PC-7 trainer and C-130 Hercules were also present.

The flying programme was similar each day and opened with a parachute drop from an Islamic Republican Guard Corps (IRGC) Aerospace Force Harbin Y-12II, followed by spirited displays from a Tucano and PC-7. Two HESA Saeqehs then performed, after which a simulated airfield attack was conducted by two Sukhoi Su-22 Fitters.