Rapido Trains has announced a new production run for the 'OO' model of the Advanced Passenger Train Experimental (APT-E). It was originally produced as part of the National Collection in Miniature exclusively for the National Railway Museum in 2016.

Rapido Trains UK has been given permission to produce a new batch for general sale through its retailer network covering both DCC ready and DCC sound fitted train packs as well as additional trailer cars. 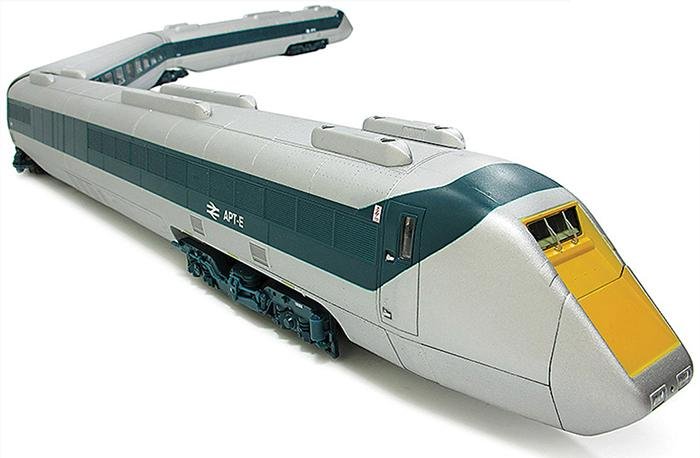 The APT-E was a gas turbine prototype built in 1975 by British Railways and featured tilting mechanisms to allow it to operate a higher speeds on curves. It set a British railway speed record of 152mph on August 10 1975 but never carried fare paying passengers. The APT-E is now preserved in the National Collection.

The new batch of Rapido Trains UK APT-Es will use the same tooling as the original. Highlights include 3D laser scanned design together with input from the original APT-E development team and an extensive specification. Each power car has a five-pole motor, flywheel, articulated bogies, working tilt mechanism, close coupling, interior detail, working lights and sounds produced from archive footage for the DCC sound fitted models.

Two four-car train packs will be offered modelling the unit with two driving and two trailer cars. These will be priced at £379.95 DCC ready and £479.95 DCC sound fitted. Additional trailer cars will be available priced at £119.95 each.

The APT-E will be available through Rapido Trains UK stockists including the National Railway Museum and Locomotion Models. A delivery date is to be confirmed.