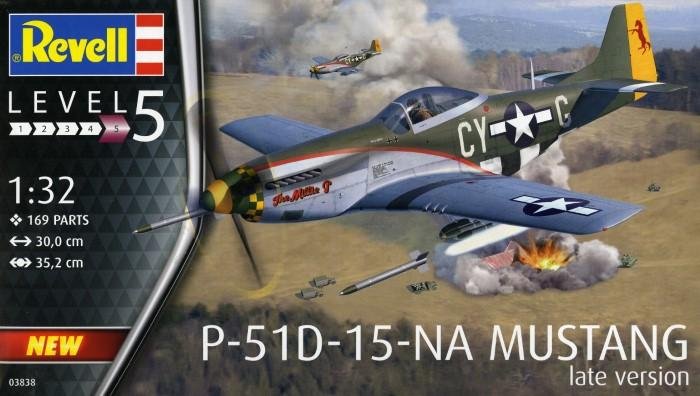 For those with deep pockets, Tamiya offers the best P-51D in 1/32 scale. However, Revell played an absolute blinder in 2017, by releasing its own Mustang in this scale. Lacking engine detail and with a less well furnished cockpit than Tamiya’s, it is still a superb kit, is accurate, and allows a splendid portrayal of the early P-51D without the vertical fin fillet. Best of all, it’s much more affordable at around £44.99 (as opposed to £120 and upwards for the Tamiya kit).

Now, though, Revell has played the trump card by re-working its parts to provide a late version, namely the P-51D-15-NA, which sports the fillet and has subtle differences in the cockpit. Extra ground-attack stores are also provided this time. Even this falls into the budget category, though, the cockpit is still very respectable, with large, detailed inserts that fit to the inner fuselage sides, a well-moulded, combined floor and radio/battery compartment, multi-part seat, rudder pedals and instrument panel with raised detail. Separate electrical/switch boxes are also present. 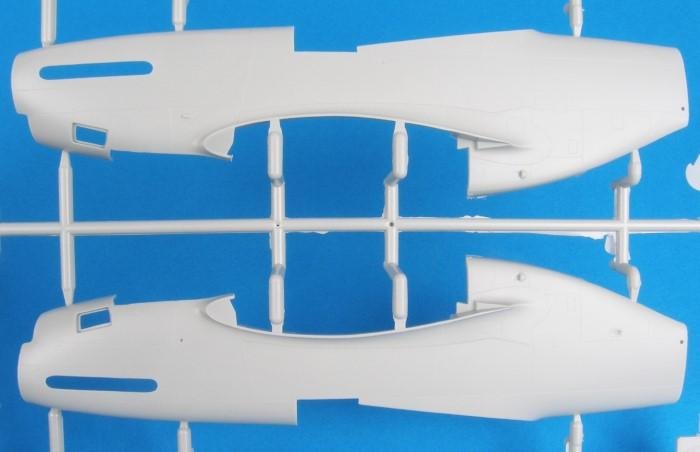 Above: The fuselage halves in this reworked Mustang, as with the original, end just before the fin fillet position to accommodate the different vertical tail formats.

Above: Here are the new tail parts with the incorporated fillet.

Revell had obviously planned more versions because the fuselage halves are split vertically at the point where the fin filet begins…allowing the two versions to be produced. Another impressive feature is that of the main undercarriage bay, whose three main parts provide structural detail but also act as a wing spar. In this boxing, due to the underwing stores, you must drill attachment holes from inside the lower wing.

Separate control surfaces are also present, for versatility in pose, although the larger parts such as those for the fuselage and mainplanes, will benefit from a very light sanding with fine Wet and Dry paper to obtain a smoother finish… especially where a metal finish is considered. 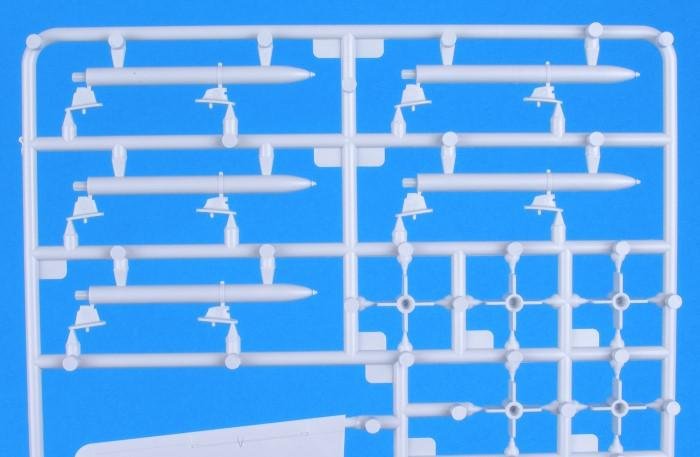 Above: Another new addition in Revell’s late version P-51D is a set of 5in rockets. 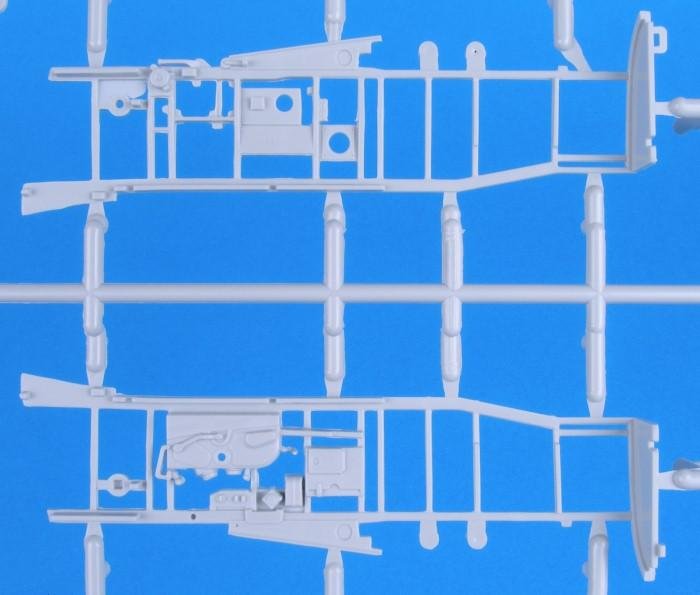 Above: These busy side panel inserts breathe life in to the cockpit.

Whereas Revell’s early version P-51D-5-NA came with metal and ‘paper’ wing tanks, and 500lb bombs, this new boxing adds 5in HVAR rockets to the mix… appropriate, as one of the units represented on the decal sheet conducted ground-attack sorties over mainland Europe. Ironically, the firm has selected colour schemes for two USAAF aircraft both lost on operations. They are: 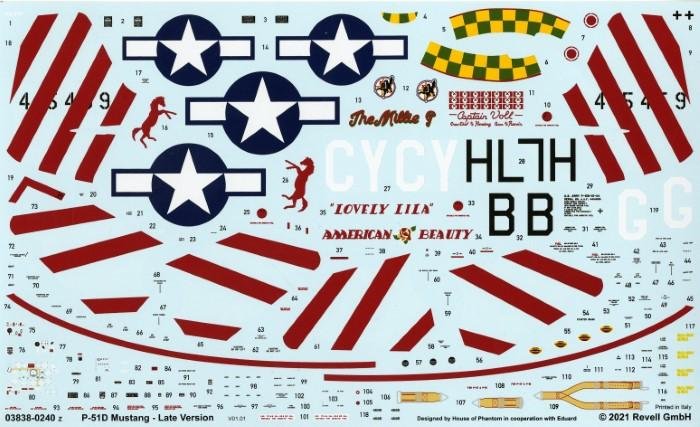 The first aircraft wears Olive Drab on its upper fuselage with, this unit’s trademark red trim acting as a boundary between the OD and bare metal portions. Revell has made a slight error on its instructions concerning the second machine, as it states that it’s a 15th FG airframe… not so. It’s actually from the 31st Fighter Group, Fifteenth Air Force. However, this ‘bird’ is also highly attractive, with yellow and red stripes, and a large kill tally under the windscreen. 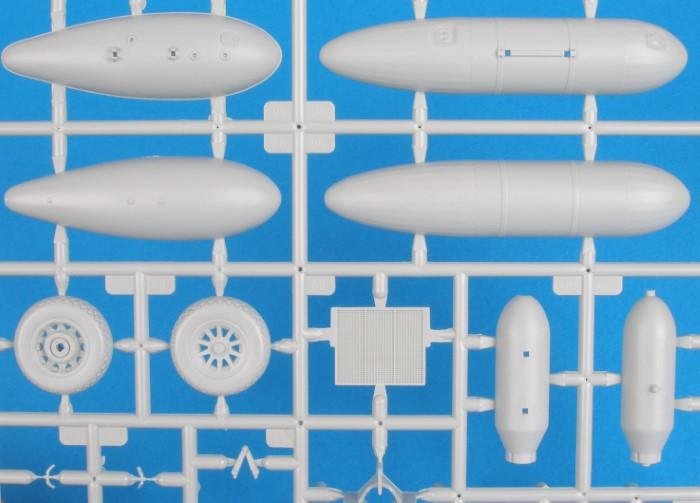 Above: Carried over from the initial release are the 500lb bombs, and two styles of underwing fuel tank.

You’ll need several coats of gloss varnish before applying the decals, due to the presence of semi-matt carrier film (you might want to undertake some trimming of the film on the larger decals, to help avoid any silvering). The printing is generally good, but there is a slight gap on one decal, between the 55th’s yellow/green checkers and the adjacent red trim. Seatbelt decals also feature; you could apply these direct, but for greater depth, they could be placed on lead foil first then cut out and fixed to the seat.

This is a pleasing and welcome extension of Revell’s 1/32 P-51D from 2017, and will doubtless encourage the production of new aftermarket decal sheets/parts, for modellers who want to go the extra mile or desire a different colour scheme. This kit is a steal at just £45.49. See www.revell.de/en for more information.

Above: Main undercarriage bay doors come as one, which is fine for wheel-up format, but they’ll need separating if the aircraft is to sit on its wheels. 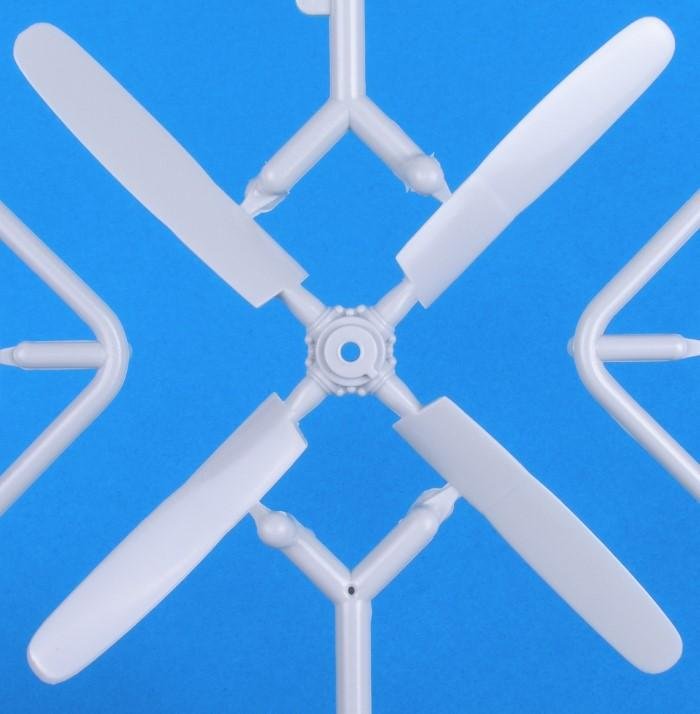 Above: A ‘cuffed’ propeller is supplied, although the cuffs themselves are not greatly pronounced. 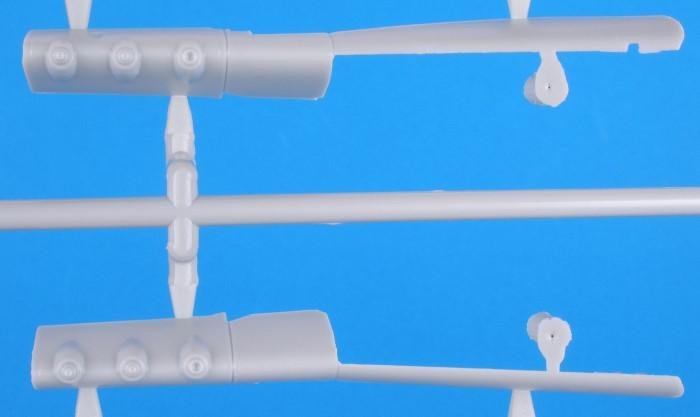 Above: It could be tricky making these gun port inserts fit with the wing.