Revolution Trains has revealed progress on its forthcoming ‘N’ gauge Class A tank wagons, as the project reaches the CAD stage of the production process. 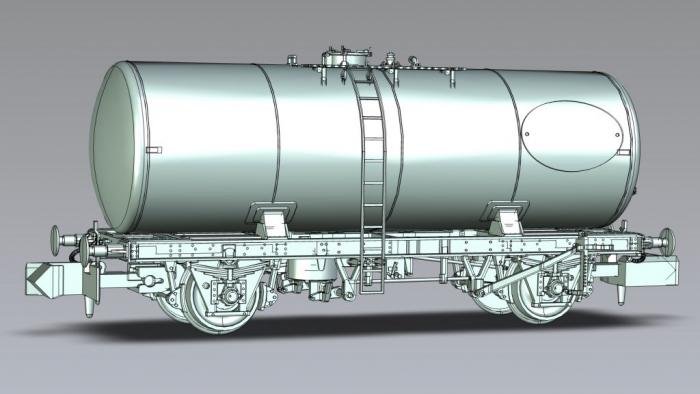 Built in the late 1950s, Class A tankers featured a longer barrel than their Class B counterparts and were designed for carrying lighter fuels.

Revolution Trains’ new model will accurately reflect the detail differences and liveries of the prototypes with examples planned in Esso silver and red, Esso grey and red, unbranded grey and red and Staveley Chemicals grey as well as proposals for those operated by Chipman’s for its weedkilling trains through the years, including the company’s distinctive green and later black liveries. The specification will incorporate a newly tooled barrel, highly detailed chassis, prototypical venting and discharge arrangements, original or revised suspension, etched catwalk detail and more.

Above: Revolution Class A artwork for Esso silver.

Above: Revolution Class A artwork for Chipman tanker.

Above: Revolution Class A artwork for weedkiller train water tank.

Priced at £19.95 each, pre-orders are being taken now. A delivery date has yet to be confirmed.