MODEL RAILWAYS in all scales and gauges catch my eye. As many will have recognised, I’ve been firmly bitten by the ‘O’ gauge bug of late and I’ve really enjoyed ‘moving up’ to 7mm scale. However, have come a long way to reach this point and I’m still very active in other scales too. 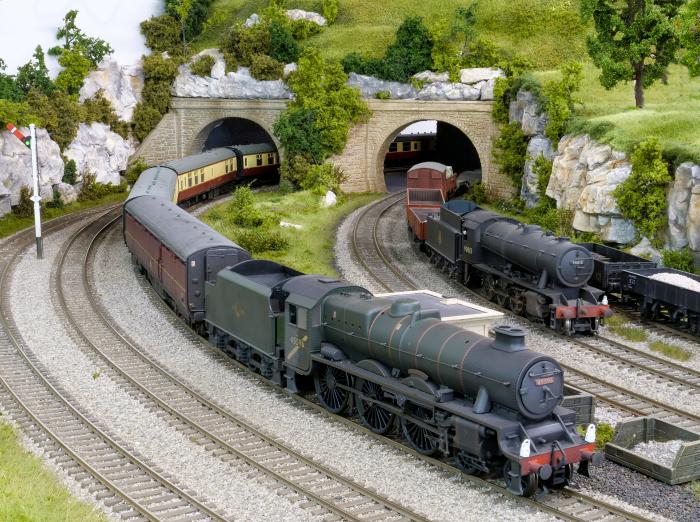 Mike’s modelling takes him across the scales from ‘N’ to ‘O’ gauge. One of his autumn projects was completion of the scenery on one side of Topley Dale.

My childhood started out with ‘OO’ gauge and remember receiving Lima’s model of Class 37 37081 Loch Long and Class 50 50043 Eagle at a very young age. At seven years old made the leap to ‘N’ gauge when a trip to Hatton’s of Liverpool netted a Graham Farish GWR ‘94XX’ 0-6-0PT, a trio of GWR wagons, a ‘Toad’ brake van and a circuit of track. It went on a pasting table in the lounge straightaway as started to get to grips with this new-found scale, which ultimately led to a bedroom layout which filled as many square inches as possible with various extensions and modifications.

For the next 12 years or so ‘N’ gauge was my main occupation. ‘OO’ gauge was always there too as we had a family loft layout, but the larger scale of ‘O’ was just a pipe dream. Over the years I’ve built a number of ‘N’ gauge layouts, including three before my life as a model railway journalist. Some were better than others and the last that built in the early 2000s attended one exhibition in 2002.

Changes in the model railway business prompted me to switch up to ‘OO’ gauge in the early 2000s - in fact it was Hornby’s Bulleid air-smoothed ‘West Country’ 4-6-2 and ‘Q1’ 0-6-0 which gave me the inspiration - and the ‘N’ gauge (by now modelling the contemporary railway scene) was packed away to make way for a new 12ft x 8ft 4mm scale layout wanted to build. It had a Southern Region theme and featured a double track mainline scene which would run through a station, past a goods yard and be served by a six-track storage yard at the rear.

Through various circumstances that never reached completion, but it did pave the way for the future and it was responsible for the station configuration on Topley Dale. Apart from a couple of modifications, Topley Dale’s station is near identical to what was aiming for with that original ‘OO’ Southern layout.

By now was at the start of my career as the editor for Hornby Magazine . After a brief period without a layout – literally the only six months of my life since I started modelling where I haven’t had a working model railway – was back building the first project for the magazine. Bay Street Shed was a short-lived layout but it attended 12 shows in its first 12 months of existence and went on to be followed by a much more successful and larger mainline/shed layout named Bay Street Mk II.

It was about this time that started building layouts on a regular basis for the magazine. Berrybridge (‘OO’) followed next, then there was St Stephens Road (‘OO’), Hettle (‘N’), Topley Dale (‘OO’), Barrenthorpe Shed (‘N’), Twelve Trees Junction (‘OO’), Shortley Bridge and Felton Cement Works (‘OO’), West Riding Power (‘N’), Grosvenor Square (‘OO’), West Coast Cement (‘OO’) and the ‘O’ gauge test track in between. More recently ‘OO9’ has been modelled as Wardle Bay (HM142) while the latest layout to roll out of the Hornby Magazine workshop is Seven Mill Depot in ‘O’ gauge (see feature on pages 50-57). must also add that I’ve had a great deal of help and support from the Hornby Magazine team in finishing these layouts for their exhibition appearances – without their input they wouldn’t have looked as polished as they do when we go out to shows.

For my own personal project I’ve been working on my ‘O’ gauge garden railway over the past 18 months, but I’m still firmly connected to other scales with work continuing on Topley Dale in ‘OO’ and recent forays back to my roots to bring our ‘N’ gauge layout Barrenthorpe out to shows over the autumn period in 2019.