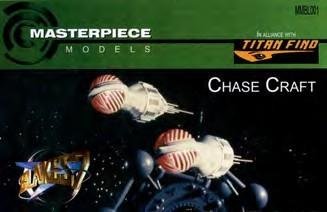 MASTERPIECE MODELS’ Chase Craft from 1970s British sci-fi series Blake’s 7 is sure to create a stir. This four-season show chronicled the adventures of rebel fighters, led initially by Roj Blake, against the ruthless Federation, in an alien spaceship named Liberator. At one point, the makers of the vessel, known as the System, pursue and capture it and the crew with these single-hulled chase craft.