FIT FOR A SITH 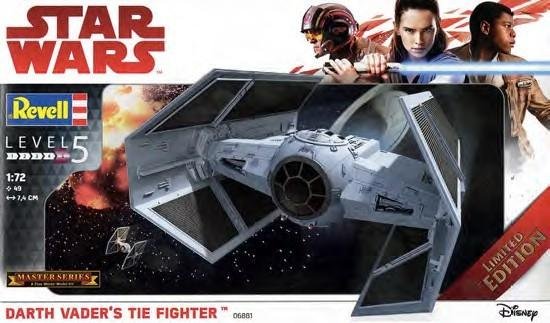 Revell has re-boxed FineMolds exquisite 1/72 TIE Advanced X1, better known as Darth Vader’s personal fighter in Star Wars. The superbly moulded parts are contained on four styrene runners (including a five-piece stand), and are characterised by crisp surface detail and a general lack of surface blemishes/flash, although both stand uprights suffer from ejectorpin marks. There’s a well-appointed interior, with a Darth Vader figure and decals for the flight instrument displays (the targeting screen is blank), but the highlight must be the exterior. Here the craft’s distinctive shape has been captured perfectly, along with the numerous ‘greeblies’ added by Lucasfilm’s modelmakers. As a Level 5 kit, it’s aimed at the more experienced modeller, but the sensible parts breakdown means those with fewer builds under their belt should still be able to tackle this iconic subject. 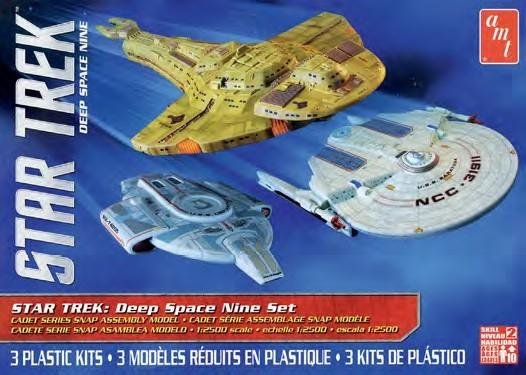 Part of AMT’s Cadet Series, this is a collection of three significant spaceships from the Star Trek: Deep Space Nine TV franchise, all portrayed in the same 1/2500 scale for continuity. The vessels are the Federation Miranda-class NCC-31911 USS Saratoga and NX-74205 USS Defiant, plus a Cardassian Galor-class cruiser. The latter two comprise a single runner (the Defiant has just six components), while the former has two frames, but all parts are moulded crisply, and the surface detail is more than adequate in this scale. The markings are the undoubted highlight, comprising two sheets of beautifully printed decals. These supply the Aztecstyle colouration for the two Federation vessels, and the varied tones on the Cardassian ship; all are to be applied over base shades as specified in the painting guide. 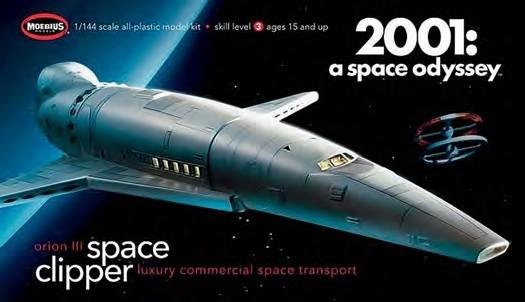 While Discovery and the wheelshaped space station get most attention in Stanley Kubrick’s 2001: A Space Odyssey arguably the most significant design was the Orion III shuttle, which transported passengers and cargo to/from earth. This graceful craft hasn’t received much attention from kit manufacturers, but Moebius’ re-released offering should redress that balance. It’s a simple offering, with just five styrene runners and separate lower hull/wings and two-piece stand, but captures the type’s sleek appearance faithfully. There are engraved panel lines on the exterior, and the ribbed section is included on the fuselage halves, as are the twin probes on the engine cowling halves. The single decal sheet provides just panel detail and stencils; the Pan Am livery as seen in the film is omitted, probably for licencing purposes, although suitable 1/144 airliner decals should suffice for the logos and pale blue cheat line. 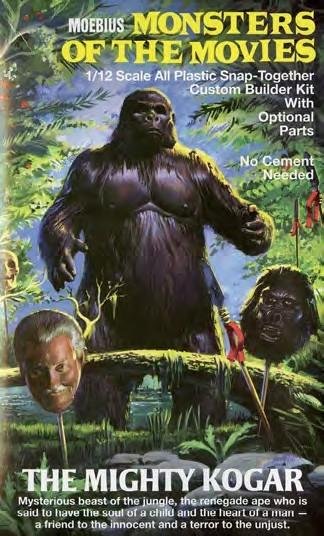 When it comes to TV-based sci-fiactors, Bob Burns III might not be the most recognisable name, but that’s because he spent a considerable part of this career wearing a gorilla suit. Moebius first released a 1/12 snap-together kit of Bob’s alter-egos back in 2012 and it’s been re-issued recently. It comprises just 22 parts, including alternative heads for Bob himself, The Mighty Kogar and Tracy the Gorilla (complete with beanie hat) and a two-piece base. This is definitely not the usual sci-fifare, and although it’s a basic kit, the sculpting and moulding quality are superb, notably for the faces, which are convincing replicas of Bob, Kogar and Tracy. While a greater starter for beginners, the price may be slightly off-putting, yet with careful painting and weathering this could be turned into an eye-catching TV spectacle… just like the originals.