ON THE SHELF ACCESSORIES 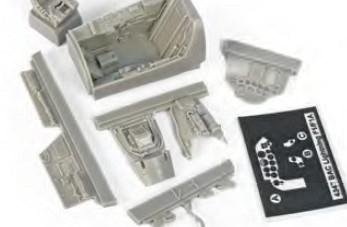 Web: www.cmkkits.com Good as Airfix’s quarter-scale Lightnings are, the one area that lacks refinement is the cockpit, but CMK’s delightful resin and acetate (for the instrument dials) package acts as a drop-in replacement. The cast detail is superb and accurate, and there’s even a replacement coaming section and rear panel (to which the canopy attaches). Minimum preparation is needed prior to assembly once the casting blocks are removed…just removal of flash from the dial apertures and ejection seat firing handles, then it’s all ready 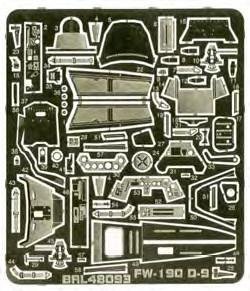 The Dragon/Italeri Fw 190D- 9 is good for its age, but it can be boosted in certain areas. Brengun’s PE offers improvement, all centred for the cockpit. There’s a new seat with belts and mounting points, instruments panels and side consoles, a map holder, windscreen trim, head armour and rear canopy decking (with a separate stowage compartment hatch), and acetate instruments. 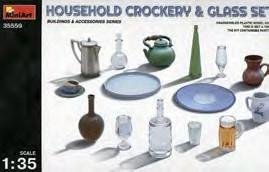 Item no: 35559 Price: £10.99 Web: www.creativemodels.co.uk Here’s another superb ‘domestic’ set from MiniArt, which is sure to find employment in dioramas, and offers cups, saucers, trays, jugs, tea/coffee pots, various bottles for alcoholic beverages and their respective glasses. Ever thoughtful, the bottles are in either transparent, clear green or brown styrene, while the glasses are clear items, requiring just paint to indicate a full receptacle. All crockery parts are in crisp white styrene, with separate handles for the tea pots, and there are even decals for motifs to enliven several of the cups. 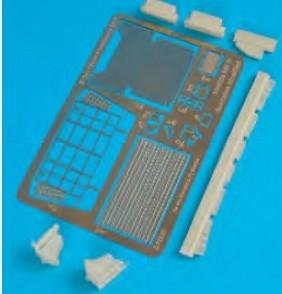 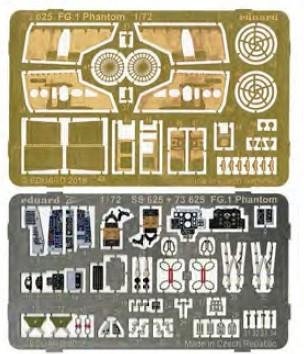 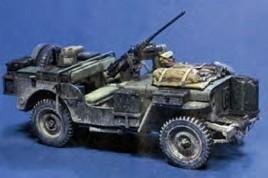 ResiCAST’s resin conversion is for Tamiya’s Willys Jeep (35219) and transforms it into one of two heavily modified vehicles used by British Army Major Vladimir ‘Popski’ Peniakoff’s Special Forces unit in Italy, during World War Two. With more than 70 resin components, it covers every nuance of these Jeeps, and offers a choice of single or twin .30 cal or single .50 cal machine guns. A host of extra jerrycans, ammunition boxes and general stowage is also included, making for a striking model 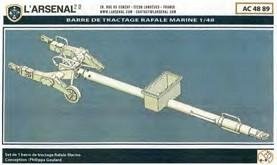 Got a Revell or Hobby Boss 1/48 naval Rafale? If so, this cool French Navy tow bar, a bespoke item for the Rafale M, is the perfect accessory. In creamcoloured resin, the item will need paper-thin flash removing from some parts, but once neatened, this resin item will be splendid. It comes with separate wheels and handles, and an optional stowage box to be mounted halfway along the arm. No painting advice is supplied, but Internet photos show it to be yellow, with small red/white markings. 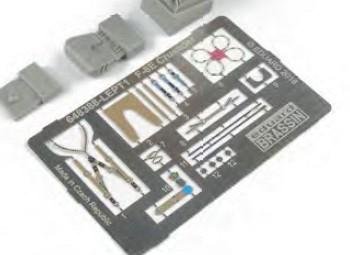 Eduard re-boxed Hasegawa’s F-8 recently, and to make more use of its additions, the ejection seat is now packaged separately for anyone with the original kit. The seat is a Martin- Baker F7, and it’s replicated superbly. The main structure is in resin, as are the parachute box and back pad, and finer details such as belts, leg restraints and firing handles come in pre-coloured PE. Vital features (drogue gun, barostatic time release unit, seat pack etc) are reproduced faithfully, although no rocket pack is present. Decals are also provided.

Web: www.cmkkits.com Modellers seeking a different look for their Hurricane should consider CMK’s resin modification, which opens the forward fuselage to allow the reserve fuel tank, part of the engine and the instrument panel rear to be displayed. It’s a matter of removing the panel immediately in front of the windscreen, adding attachment rings and then a baseplate, onto which the tank, bulkheads and panel are secured. A splendid resin panel is also included. 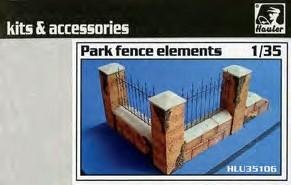 Hauler’s Park fence elements will make a splendid focal point in a vignette or larger scene. They comprise three cemented stone block pillars and a trio of lateral block sections, one being damaged to provide a ‘natural’ end-point. Cracks and other blemishes are well-rendered in these resin components, and even equally worn coping slabs are provided. The genius comes via beautifully detailed photoetched brass railings, which will look stunning with the right amount of peeled paint/rust. 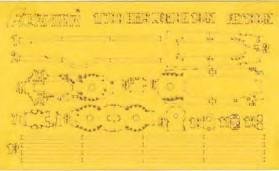 Web: www.flyhawkmodel.com Given the challenge of painting ship deck features, it’s odd that it’s taken this long for bespoke masks to emerge. Flyhawk has supplied such a product for its HMS Legion (see Maritime reviews) in pre-cut tape. There are 12 main items for the deck levels/ sections; these are segmented to conform with the mouldings, and there are spare lengths for covering remaining gaps. Replicating the deck patterns is now a breeze! 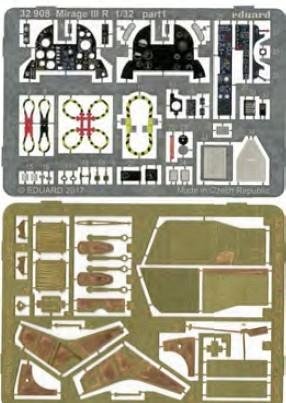 Price: €18.75 Web: www.eduard.com Italeri’s 1/32 Mirage IIIE/R is a good kit, but this large scale demands extra refinement. Eduard’s bespoke offering has pre-coloured PE and plain brass, all for the cockpit. The Martin-Baker seat receives new side/ head box/seat pan panels, along with firing handles, and there’s a two-layer instrument panel and side consoles, tub lining, rudder pedals, and a canopy mirror/lock. Note the instrument panel echoes the unit in the French IIIRD and not the IIIR. 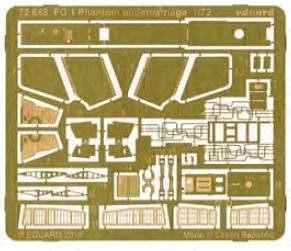 Phantom Phreaks who want to go all-out in detailing Airfix’s new FG.1 need look no further than Eduard’s bespoke additions. This PE fret provides embellishment for the kit’s undercarriage bays (nose and main), with new linings, representation of hydraulic lines in the nose bay, and new doors for the latter, along with inboard and small outboard doors for the main wells. Also supplied are oleo scissors for the extended nose leg and main legs, and grilles for the tops of the air intakes. 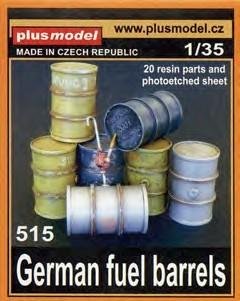 Plus Model offers three styles of fuel drum in this resin/PE ensemble, allowing modellers to recreate that staple of armoured warfare, the supply scene. The differences in the two-piece barrels are in the lids’ raised stencils, and these are simple to add after removing the casting blocks. PE strips emulate the side bands, and there’s a fourpart hand pump/siphon; vinyl tubing for the fuel pipe must be sourced separately. 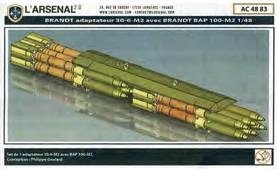 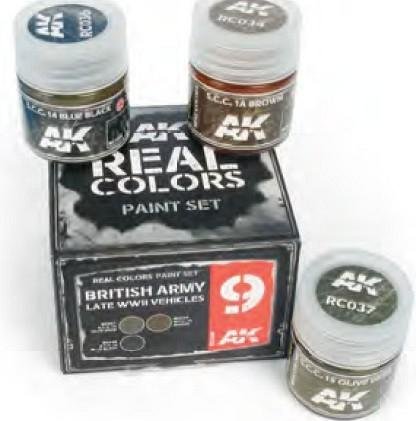 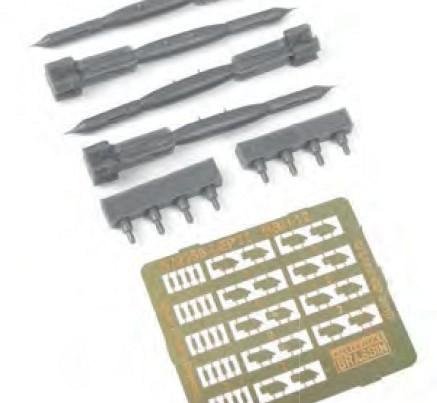 Eduard’s munition sets are setting new standards for quality and detail, and its resin and photo-etched (PE) brass GBU-12s are no exception. There are sufficient parts and decals for four bombs, with each comprising a well-cast main body and laser seeker (covered/uncovered versions are supplied) and PE control fins and trailing edges to the pop-out wings. These represent the Paveway II series, and would be ideal for US Air Force tactical aircraft, along with modern NATO assets.

Web: www.yahumodels.siemianowice.com Designed to complement IBG Models’ lovely PZLs, this prepainted and pre-assembled photo-etched metal instrument panel is a direct replacement for kit part B15. There are two ‘pins’ holding the two sections together, and these can either be cut or bent to form the correct angled configuration as depicted in the instructions. It’s a quick and effective improvement to the styrene, and adds to an already impressive cockpit interior. 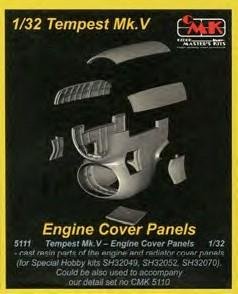 Web: www.cmkkits.com This stunning set of resin engine cowling panels is produced to accompany CMK’s Napier Sabre engine, itself designed to fit sister brand Special Hobby’s Tempest Mk.V. The jewel is the main chin fairing which, akin to the other panels, has full interior features. The other sections have well-rendered ribbing, and there’s a delicate representation of rivets. If fitting the separate engine to Special hobby’s kit, and mounting on a base, simply lay these panels on the ground, around the aircraft.

Web: www.airscale.co.uk This is a cracking upgrade for any 1/24 Spitfire, whether it’s by Airfix or Trumpeter, and supplies a completely new instrument panel in photoetched brass, with decal liners for the dials and a sheet of clear acetate to emulate glass covers. There are two styles of Blind Flying Panel, with the rectangular type common to early Spits and the arched version featuring on late Mk.IXs onwards. A separate airspeed indicator is provided for a Mk.Vb, and there’s even a marking for the compass; all one needs to do is add either an acetate disc or gloss varnish. 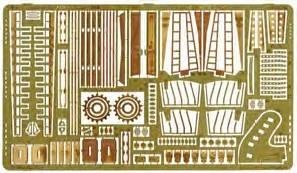 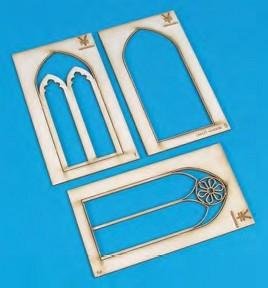 Web: www.yenmodels.be Yen Models’ splendid three-piece laser-cut wooden Lancet window provides a realistic 3D rendition of a Gothic-styled arched window frame, complete with upper ‘rose’. This design was popular during the 12th and 13th Centuries and was commonly found in churches, but also in early 14th Century castles and nobles’ residences. Assembly is easy, as the three plates are designed to stack in order, and could be fitted into aftermarket or scratch-built walls/ruins… the challenge would be creating suitably convincing glazing. 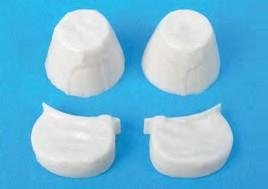 Web: www.spruebrothers.com This neat ‘fix’ from Steel Beach offers resin F/A-18A-D F404 engine exhaust units, and air intake sections, with covers cast integrally. Almost all military jets are fitted with these covers if they are parked, to combat possible Foreign Object Damage, and some feature their own decorations. As these items are designed to fit Kinetic’s Legacy Hornets, one could have fun in replicating squadron motifs for extra accuracy and colour. 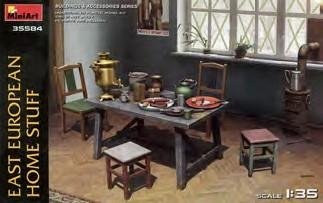 With a catch-all phrase of ‘stuff’, MiniArt supplies furniture for a 1930-1950s Eastern European house, offering a trestle table, two chairs, two stools, a wood/coal-burning stove, samovar and kettle, and assorted cutlery, crockery and food. Most of the well-moulded parts are held on one white and four grey styrene runners, but a small PE fret supplies stove lids, samovar fittings, and handles for ladles, saucepans and lids. Clear assembly and painting guides are included, with colour matches for Vallejo, Mr. Color, Lifecolor, Tamiya, Testors, AK, Humbrol and Revell products.