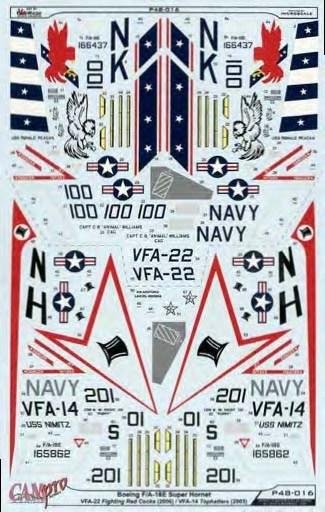 Modellers with 1/48 F/A-18E Super Hornet kits may wish to consider CAM-Pro’s gorgeous twojet offering, which supplies decals for one airframe each from VFA-14 Tophatters and VFA-22 Fighting Redcocks. The latter is a Carrier Air Group Commander’s airframe (MODEX 00 or ‘double nuts’), while the former is a Squadron Commander’s ‘bird’, both of which receive full colour markings in place of the usual grey-on-grey insignia/artwork. Printed by Microscale, the decals feature accurate colour tones, most notably on the Tophatters’ artwork and livery, plus perfect register and crisp demarcations. Most of the airframe stencilling is included, with solid walkways, although modellers may wish to check references.

NOT SO DANISH CARRIER 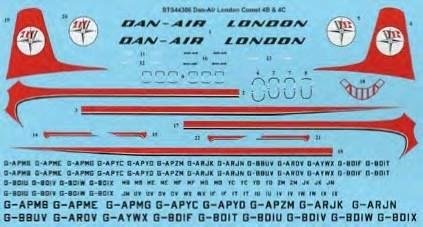 Dan-Air London Comet 4B and 4C

British airline Dan-Air London is the subject of 26’s two decal sheet, with carrier specific markings separate from generic airframe glazing and stencilling. This set is designed for Airfix’s classic Comet 4B kit, but it’s possible it may also work with FRSIN, Welsh Models and AModel offerings, due to the passenger windows being supplied in sections. Serials are supplied for 17 of the airline’s eventual 49 Comets and all are clad in the standard light grey/white livery, with a red tail and cheat line along the fuselage. Differences between the 4B and 4C subtypes are captured faithfully, and there are decals for the upper and lower engine nacelle grilles, plus small walkway areas on the inner wing. Modellers will need to study the instructions carefully as several markings must be applied in a specific order, such as the passenger doors, otherwise detail will be lost. 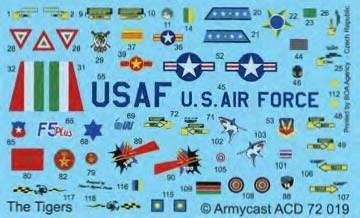 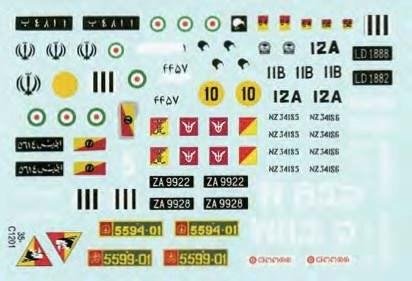 The first batch of CVR(T) Scorpions from Star Decals portrays vehicles from New Zealand, Iran, Iraq, Thailand, Malaysia, Indonesia and the Philippines, covering 11 subjects in total. This is a splendid selection, mainly addressing machines exported to the Middle East and Asia, and will certainly make for an eyecatching model when paired with an Accurate Armour or AFV Club kit. Register and colour boundaries are excellent, although the carrier film is matt. 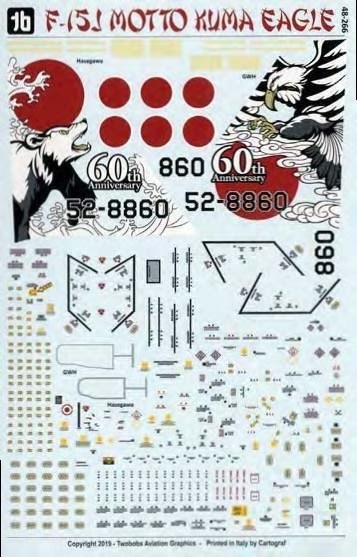 Modellers looking for a stand-out scheme for their Hasegawa or Great Wall Hobby 1/48 F-15 Eagles will enjoy this Two Bobs release. It depicts a one-off livery applied to an F-15J of the Japanese Air Self- Defense Force (JASDF) to commemorate the 60th anniversary of Chitose Air Base. It includes full airframe stencilling, insignia and serials, but the standout items are the markings for the distinctive twin tails – each is supplied as a single piece, with an eagle on the port tail and a bear (the squadron’s chosen mascot) on the starboard side. All items are printed on gloss carrier film, with perfect register, colour density and sharp demarcation between tones, while a replacement colour call-out is included in the set to aid tonal matching on the airframe. The aircraft depicted is:

These markings from SBS Model should be suitable for any 1/72 offering of the Fieseler Storch (Stork) liaison aircraft, allowing modellers to depict the type in Finnish colours. The markings appear simple, with insignia consisting of swastikas for World War Two machines,and later Finnish Air Force roundels for the sole post-war example. Airframe serials are also included, with a technical information panel provided for one scheme. White areas on the markings do appear translucent, so would benefit from an undercoat to prevent any camouflage being visible through them. The instructions also include colour guidance, with Luftwaffe colours employed alongside general aircraft hues. 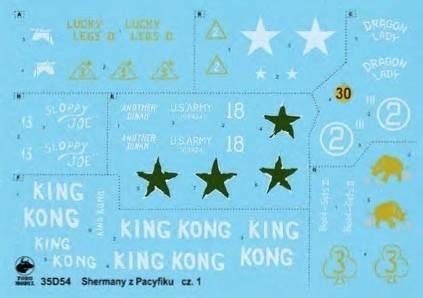 This is the first of ToRo’s 1/35 markings for Sherman tanks deployed to the Pacific theatre of operations, comprising seven schemes and covering several M4 variants. The decals are supplied on an overall glossy carrier film, with good colour register and opacity, particularly as most of the markings are white. Placement is indicated in greyscale; but colour profiles with painting guidance are available on Toro Model’s website.

The seven choices are: 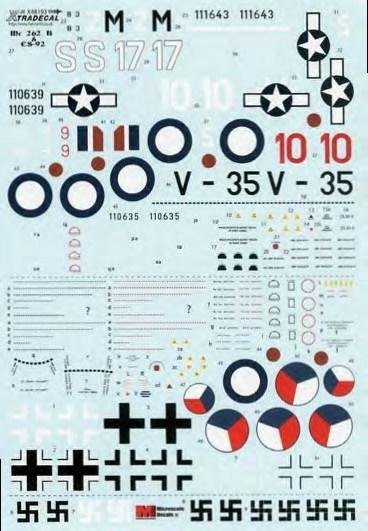 Xtradecal has released markings for 1/48 two-seater Me 262s, including trainer, night-fighter and Czech-built Avia CS-92 ‘Turbina’ airframes, plus several captured aircraft. The sheet contains two colour options for stencilling, plus Balkenkreuz alongside Czech, RAF and American insignia – all with placement/colour guides and references. A 1/32 scale set (X32068) is also available, but this omits three airframes (including the Avia example) and doesn’t include stencils.

The eight schemes are: