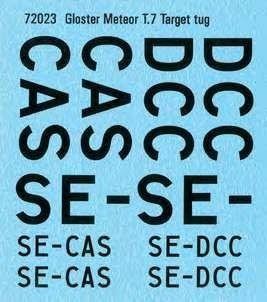 Intended for the MPM/Xtrakit 1/72 two-seat Meteors, this delightful product from Moose Republic provides for two of Sweden’s privately owned target tug airframes, one of which was the first civilian military jet aircraft in the country. There are comprehensive notes on the airframes’ colours (principally yellow and red), along with guidance on which aspects must be scratch-built for an accurate Swedish T.7. Full stencilling is supplied, along with wing walkway lines and two styles of fin-located arrow markings (corresponding to the differing locations for these items, depending on the date). The options are:

This is SBS Model’s first foray into Hungarian Bf 109Gs and it includes a quartet of aircraft, all wearing the characteristic yellow lower nose and wingtips plus fuselage band; several also bear the national colours on the vertical fin and horizontal stabilisers. As is usual for this firm, there are sufficient markings for all four aircraft, including national insignia, and there are three different styles of spiralschnauze for the spinner.

The gloss carrier film should aid application by minimising silvering, and the inclusion of two-part unit shields is a neat touch. It is also available in 1/48 scale (D48020). The four schemes are:

BIPLANES WITH THE HUMP 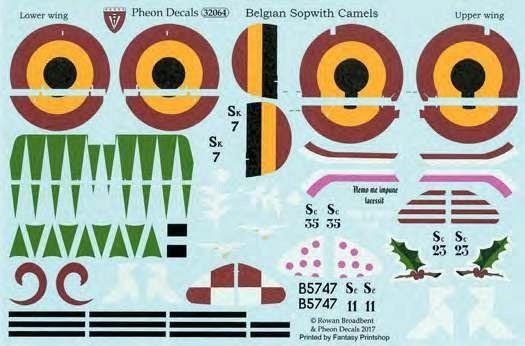 Pheon’s markings are designed to fit Wingnut Wings’ Clergetengined Camels (although it should be possible to use them on Hobbycraft’s offerings) and provide seven colourful Belgian Air Service choices. The decals exhibit excellent colour density and delineation, with sharp boundaries and there is no hint of bleed through from underlying hues. A small correction sheet supplies correctly toned ‘tulips’ for Jean Olieslagers’ aircraft, while the roundels are each supplied as two-piece items to allow them to be folded over the wing edge into the aileron recesses. The choices are: 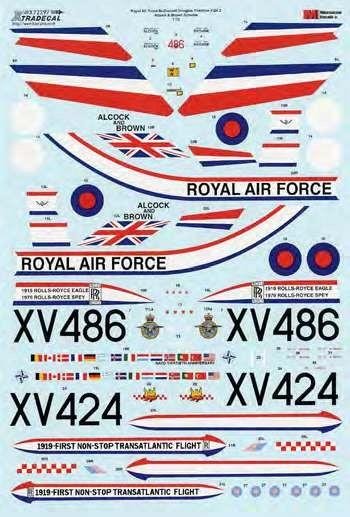 Arguably the most colourful scheme ever worn by an RAF Phantom, the livery worn by two RAF jets to commemorate the first non-stop transatlantic flight by Alcock and Brown in 1919 features on Xtradecal’s latest sheet. All the complex trim is supplied here in decal form, so all modellers have to do is paint the exterior overall Light Aircraft Grey. While there are large areas of white, these are of sufficient opacity to prevent any underlying colours being visible, and the tones are consistent for the roundels, trim and large Union flags on the sides of the vertical fin. Either of the FGR.2s involved in the transatlantic flight re-enactment (XV486 and XV424) can be built, and there’s an additional option for the latter airframe as it appears currently in the RAF Museum, Hendon, in 56 Squadron regalia (including Signal Red vertical fin). Designed for Airfix’s new FGR.2 kit, the decals will make for an eyecatching model. 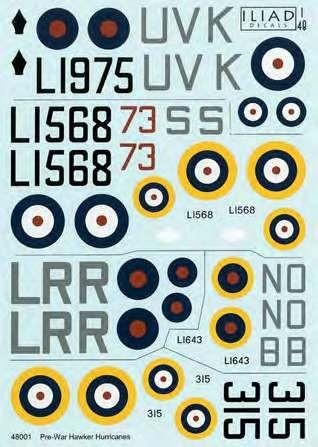 Iliad has reprinted its sheet of pre-war Hurricanes, in response to poular demand, with a bonus fifth scheme. The featured airframes are in standard Dark Earth/Dark Green camouflage, with a mix of aluminium, black and white in varying amounts on the undersides, with a pleasing mix of A- and B-type patterns. Comprehensive notes will aid modellers in fitting the correct styles of exhausts, antenna mast, propeller and wing covering, although aftermarket products or scratch-building skills will be needed for most of these, in the event a Classic Airframes kit can’t be sourced.

The five options are: 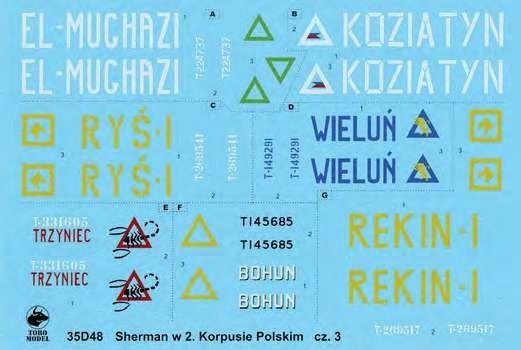 This third collection of Polish Army Shermans focusses on machines assigned to 2nd Polish Corps, and features a mix of standard US-pattern and British modified vehicles. The wellprinted decals exhibit excellent register, clarity and opacity; the latter is notable on the white items. Colour profiles are provided on the ToRo Model website. The seven vehicles (most noted at Loreto in August 1945) are: 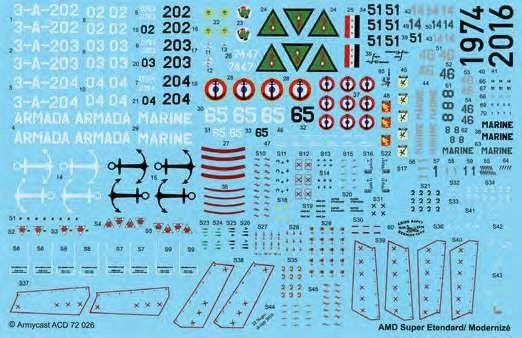 Armycast’s stunning collection of ten schemes covers French, Argentinian and Iraqi machines from the 1970s to its eventual retirement in 2016. It’s intended for the Sunny Tri-S kit (re-boxed by Academy and Italeri) and supplies sufficient airframe stencils for at least four models, which makes this great value.

Register and colour density are excellent, notably on the French and Argentine Navy insignia. The choices are: 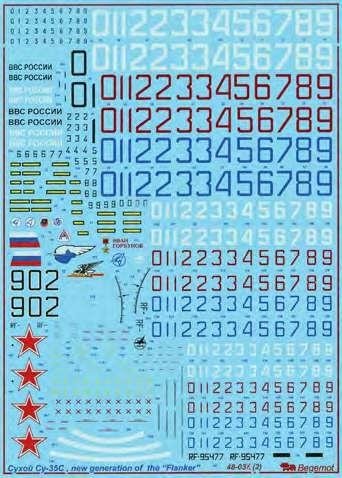 When it comes to decals for modern Russian subjects, Begemot is without compare; here it covers the Su-35 Flanker, from prototypes to frontline machines. The firm’s attention to detail is apparent from the outset, and all Cyrillic lettering is readable. Most fuselage/tail numbers are two-part items, with separate white and red/ blue segments. Sufficient stencils are supplied for a single airframe and a full complement of air-to-air and air-to-ground munitions and electronics pods. This set is also available in 1/72 scale (72-055). Among the 20 schemes are: 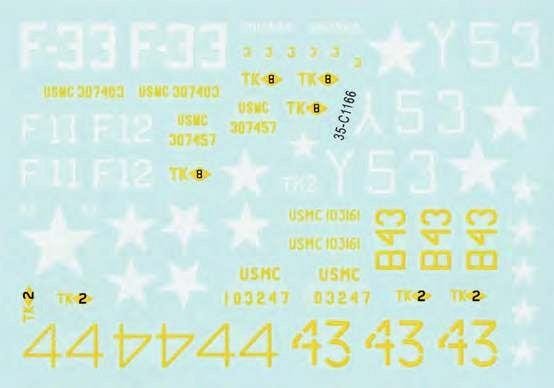 This is the fourth compilation (of five to date) of Korean War Shermans, and covers specialised US Marine Corps vehicles, in the form of flamethrower-, dozerand communications-equipped tanks. There are notes explaining whether specific machines carried spare track links or railway tracks as add-on armour, along with additional fuel/water stowage on the hulls. This is an unusual collection and one well worth considering, and is suited to 1/35 offerings from Academy and Dragon/Cyber-Hobby. All seven overall Olive Drab machines (three primary plus four alternatives) are all from the 1st Marine Tank Battalion: 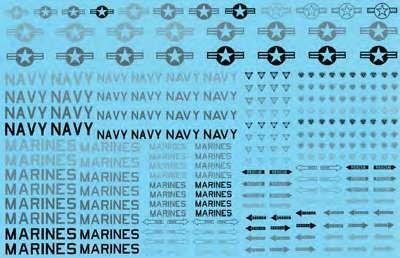 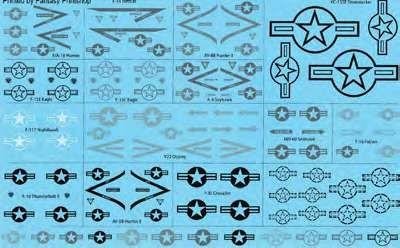 There are examples in white, black, FS 35237 Gray Blue, FS36375 Light Compass Ghost Gray and FS 36320 Dark Compass Ghost Gray, plus ‘Rescue’ and ejection seat warning symbols in the same tones. As a bonus, there are intake warning triangles for AV-8B Harrier, F/A-18 Hornet, F-14 Tomcat, V-22 Osprey and A-4 Skyhawk. Other types catered for include F-117A, A-10 ‘Warthog’, MH-60 Seahawk, F-16 Fighting Falcon and F-15C/E Eagle/Strike Eagle. This is a great value offering, with sufficient markings for multiple models. This sheet is also available in 1/72 scale (72-114). 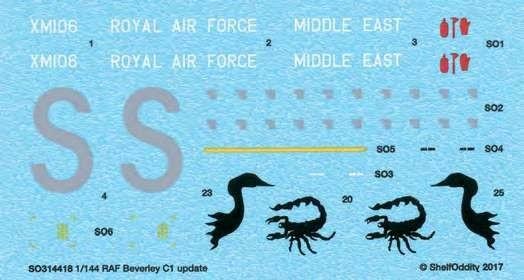 While MikroMir’s small-scale Beverley is a very welcome addition to the hobby, the decal sheet has some ‘fluffs’ in the form of missing letters on one of the schemes. Cue Shelf Oddity’s useful sheet, which provides the correct legends, squadron badges and stencil markings. There are no national insignia, so they must come from the donor kit. The aircraft in question is XM106/S, a desert-camouflaged RAF Middle East machine from 84 Squadron, in 1967. 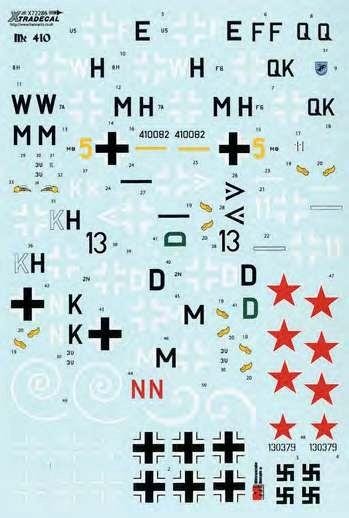 Hannants’ own brand has already released a 1/48 version of this sheet, but now fans of the ‘classic’ scale also have 13 new options for the Me 410, if building kits by Finemolds/Eduard, FROG, Italeri, Matchbox, Revell and the like. Most aircraft here wear combinations of day fighter splinter and mottle, but there is one ‘410 with very busy, wavy over-sprayed camouflage, and another with all-black undersides and vertical tail. There’s also a Soviet-flown ‘war prize’. Examples from this generous cache include: