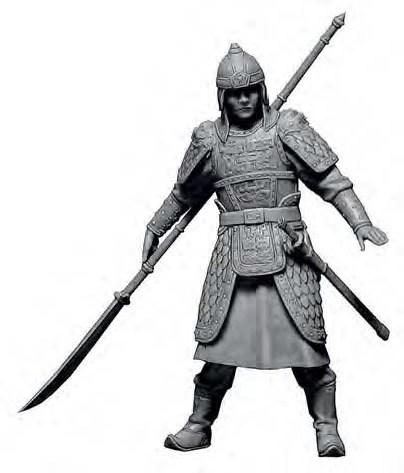 Zhu Yuanzhang was the founding emperor (taking the title Hongwu) of the Ming Dynasty, which ruled China between 1368 and 1644, and is the subject of this 1/24 release from Master Box; it depicts the leader at the Battle for Nanjing, with the city serving as his headquarters and capital after the victory. One light-grey styrene runner supplies 27 components, with convincing creased clothing and scale-plate armour, however moulded detail appears soft on the solid armour chest plate and boots, plus the seams will need to be tidied on the larger items. The figure carries a guandao pole weapon (likely ceremonial), which is supplied as one piece and features a particularly fine blade, plus an additional sword in a scabbard. 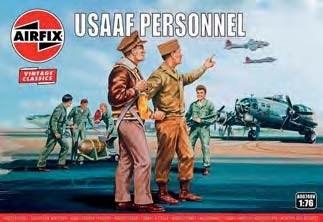 Airfix’s 1/76 set of USAAF Personnel returns under the Vintage Classics banner, and as such features the original box artwork. A total of 42 figures are included, plus a pair of ammunition trailers, which takes the shape of two bombs. There are various poses, allowing refuelling, rearming and marshalling scenes to be produced, plus aircrew wearing lifejackets. Detail is acceptable, particularly given the age of the moulding, but this means items – including the bombs – lack finesse. There are also seam lines across the runners – the softer vinyl-type styrene will make these a challenge to remove. Despite these issues, this remains a delight, and is ideal for populating small-scale dioramas.

ONE MAN AND HIS DOG 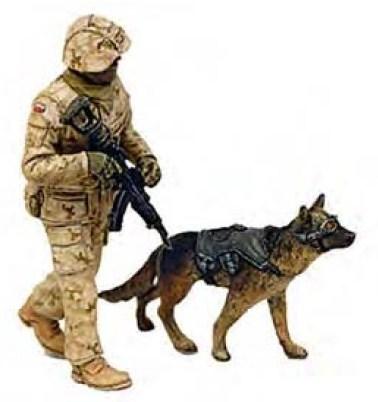 ToRo Model has added to its range of Polish soldiers with a set containing a figure and a service animal as deployed to Afghanistan in 2011. It comprises just five components, with the main bodies of both man and dog supplied as one-piece items with separate arms and tail respectively. Once flash and casting blocks are removed, detail is completely convincing, with incredibly fine trouser hemlines and body armour storage pouches, plus a neat representation of an AK-74 assault rifle. The canine figure is the standout though, with wonderfully rendered fur, plus it wears accurate goggles and protective vest. A selection of decals also provides options for rank insignia, national patches, blood group and name tags, and cap badges. 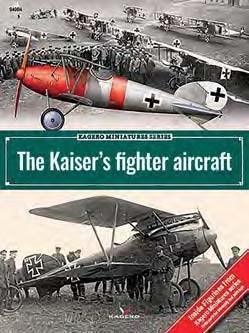 Kagero’s splendid one-piece pilot figure is ideal for posing with any Wingnut Wings German aircraft model. It depicts an aviator clad in cold weather flying gear, in the form of a lined coverall with cross-body fastener, scarf and flying helmet. The sculpting and casting are first-rate, from the convincing creases in the outer clothing to the lugubrious expression. While the price may seem slightly high, the figure comes with a 16-page manual, The Kaiser’s fighter aircraft, which provides plenty of reference photos and modelling inspiration. 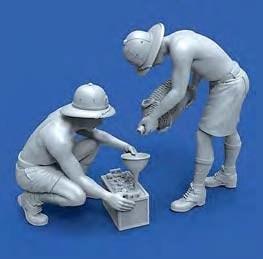 This two-figure ensemble is ideal for any desert vehicle maintenance scene, with barechested soldiers depicted in the process of refilling a large vehicle battery with either acid or de-ionised water. Each comprises five crisply cast components, with separate arms and torso; while the battery and re-supply bottle (encased in a wicker-type material) are singlepiece items. Clothing – notably the boots and socks – body posture and facial expressions are realistic, and the attachment points are keyed to ensure a snug fit. 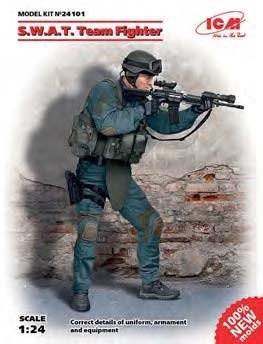 ICM again provides a great-value package, combining its four separate SWAT team figures (24101, 102, 103 and 104) into a single box, and at less than half the combined price of the original purchases. Two members are armed with pistols, one is crouching with a slung rifle, while the second holds an armoured shield; the others are standing, with rifles aimed or at the ready. The moulding is to the firm’s exacting standards, with convincing representation of the clothing, weapons (CAR-15, SIG Sauer P226 and H&K MP5) and body armour. There is an impressive level of detail, with separate equipment pouches, three different helmet types, radios and eye protection.